Is Ezekiel Bread Gluten Free? Only These Varieties

What is Ezekiel bread?

California-based Food For Life Bakery came up with the Ezekiel 4:9 bread. The recipe is inspired by the Biblical verse where God instructs the prophet Ezekiel to make bread using wheat, barley, beans, lentils, millet, and spelt. Together they make a complete protein that’s 84.3% as efficient as eggs. It’s low glycemic and high in fiber.

Using the NIV translation, here is the exact verse:

“Take wheat and barley, beans and lentils, millet and spelt; put them in a storage jar and use them to make bread for yourself. You are to eat it during the 390 days you lie on your side.”

This instruction was given to Ezekiel, who laid on his side and ate this bread for 390 days. Each day represented one year, in which he symbolically bears the guilt for the 390 years that the people of Israel were disobedient.

Despite what some people claim, it was a directive aimed at one person, for a specific circumstance. It was not an instruction for everyone to eat it.

Though perhaps you should eat it, if you aren’t allergic or sensitive to what’s inside.

Its biggest nutritional advantage is the sprouting of the grains and legumes. This breaks down enzyme inhibitors, making the carbs easier to digest and the minerals more absorbable. Health benefits are further boosted by the use of flourless grains, which leads to steadier blood sugar vs. regular white or wheat bread. Ingredients are non-GMO, organically grown, and 100% plant-based.

The Ezekiel bread ingredients are not gluten free, at least when it’s made using all 6 of the ingredients listed in the original Ezekiel 4:9 Bible verse. To make it celiac-friendly, you would need to leave out the wheat and barley, both of which are major sources of the gluten protein. 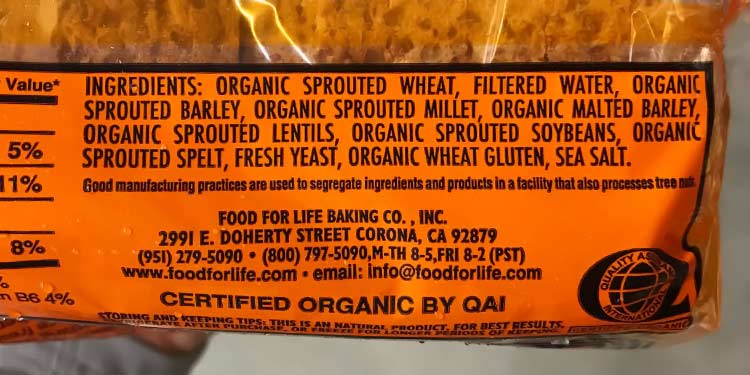 As you see, none of the 6 ingredients are in flour form. That’s why the bread doesn’t spike your blood sugar like normal bread does. Very few brands make flourless bread like this.

The verse in the Bible it’s based off of calls out wheat, barley, spelt, and millet specifically. However for the beans and lentils listed, those are broad categories. Given that soybeans are native to East Asia, they probably weren’t used originally.

Of course that also means it’s not soy free, which makes it unsuitable for those with a soy allergy. Everyone else though can take comfort in the fact that it’s organic soybeans. That means you don’t have to worry about glyphosate exposure and since it’s made with flourless whole soy, none of those nasty solvents like hexane were used.

As far as taste, our reviews are quite positive. For those here who eat gluten, they have been buying this bread for over a decade. The flavor is savory, salty, and subtly sweet, all in each bite. The texture is fluffy, yet still chewy enough to feel satiated.

What is Genesis bread?

While not as popular as their Ezekiel line, the brand Food For Life also makes Genesis 1:29 bread. Unlike the Ezekiel verse which lists 6 specific ingredients for bread, the difference with Genesis 1:29 is that it broadly says “every seed-bearing plant” and “every tree that has fruit with seed in it” can be used as food in general.

Here’s is the exact verse in the Bible, per the NIV translation:

“Then God said, “I give you every seed-bearing plant on the face of the whole earth and every tree that has fruit with seed in it. They will be yours for food.”

Now this is at the very start of the Bible, in the book of Genesis, where God is giving basic instructions as to what the newly created male and female can eat.

This verse was not specific to bread and in fact, baking is something that likely came long after. Considering that and being that no specific seeds were listed in the verse, obviously Food For Life has taken a lot of liberty in their formulation of Genesis 1:29 bread.

Fortunately, they did a good job at it. 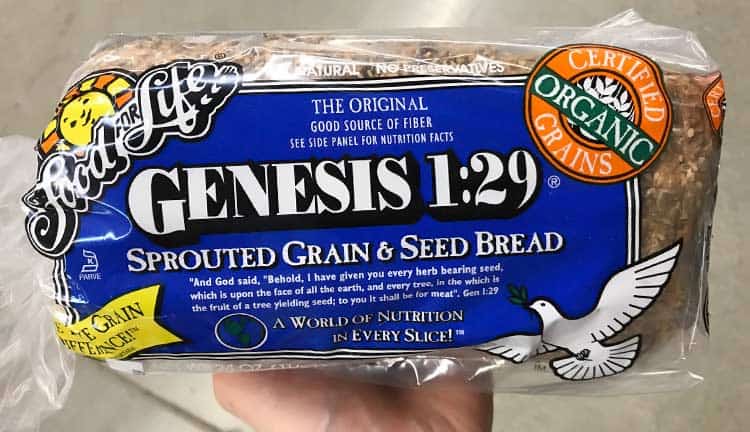 Using grains from around the world, here is a full list of the ingredients that were chosen for the Genesis bread recipe:

Their original recipe says “16 grains & seeds from 13 lands” but if you count, you will get 18 different plants. The discrepancy is merely due to semantics, as to what they count for different grains and seeds.

Genesis bread is not gluten free, as it contains 3 sources of gluten; wheat bran, spring wheat, and barley. Some people claim that it’s low gluten but that’s false, because the 16 ingredients are not in equal amounts. The first 3 listed are “Organic Sprouted Wheat, Filtered Water, Organic Malted Barley.”

The taste and texture of Genesis is similar to Ezekiel, though arguably a bit more complex.

Yes, assuming you don’t have a gluten intolerance or need a wheat-free diet for other reasons, both the Ezekiel 4:9 and Genesis 1:29 breads are good for you.

How many calories they have is just 80 per slice. With 4 grams of protein in each, that means 20% of the calories are in the form of protein, with only 6% coming from fat. The other 74% of calories are coming from complex carbs (15g) that are low glycemic for sustained energy.

Now those nutrition facts are for the original Ezekiel bread (in the orange bag) and Genesis (blue bag).

They also make other varieties of Ezekiel 4:9:

All have 80 calories per slice and 4 grams of protein with one exception; Cinnamon Raisin. Its calorie count is the same but there’s less protein (3g) and the glycemic index is higher at 43 due to the sugar from the raisins. For diabetics, that still counts as a low GI food. 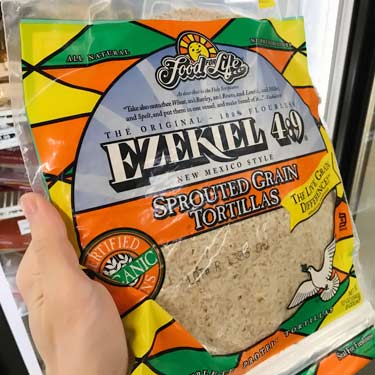 Food For Life also make cereals, English muffins, tortillas, buns, pita breads, pasta, and even waffles that sport the Ezekiel label. They all hold true to the original 6 seeds and grains but differ in their formulations and added ingredients.

For example, the waffles also have mesquite bean pods, nopal cactus, and annatto seeds, in addition to the flavorings like blueberries, apple-nut (with pecans and/or walnut), or vanilla for the original plain flavor.

For each of the food categories they’re in, they rank among the best for you when compared to competing products.

Which Ezekiel bread is healthiest?

The Cinnamon Raisin makes a good treat, though the sweet flavor is not suitable for sandwiches. The flax flavor is bad for you if you’re man. That’s because flax seeds are the highest phytoestrogen food, being 264% worse than soy.

Whether you’re a man or woman, the best variety for you will be the low sodium bread. It uses the exact same recipe as the bestselling original Ezekiel sprouted whole grain, except there’s no salt added. That means you’re avoiding 75 mg of sodium per slice.

Trader Joe’s and other grocery stores that sell Ezekiel don’t always carry all the flavors. If the low sodium is unavailable, then stick with the original or the sesame, as both are tied for second place.

Which Ezekiel bread is gluten free?

Technically, none. The manufacturer only uses the Ezekiel branding for their products which contain the ingredients inspired by the Ezekiel 4:9 Bible verse. Since wheat and barley are included in that verse, it means all Ezekiel breads contain gluten. However Food For Life does make similar alternative breads which are 100% gluten free. 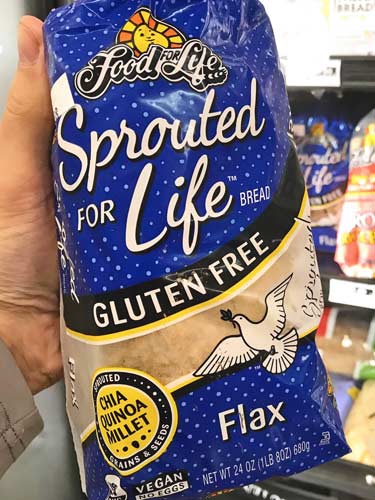 The GF varieties are:

That’s right, they have more types of bread without gluten than they do with it!

What’s really unique is that they’re all vegan, without eggs, milk, or other dairy being used.

Dairy and egg free like this is hard to find. All the other major brands for GF bread use eggs including Udis, Rudis, Glutino, Canyon Bakehouse, Three Bakers, and Trader Joe’s.

A drawback is that the rice-based are very dense without any fluffy texture. That means up 120 calories, which is 50% more than Ezekiel. To make matters worse, the size of each slice is very small. The carb count is high and the protein content is low at just 2 grams. For those with negative reviews of this bread, you will hear these complaints the most.

Setting aside those disadvantages, the taste for most of the rice flavors is pretty good! 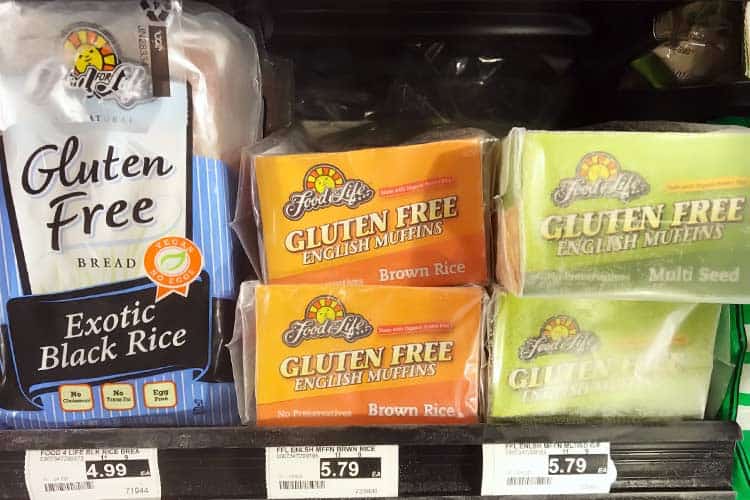 The healthiest will be the black and red rice. At around $5 to $7 per loaf, they’re more expensive than the brown rice version. Is it worth it? Well consider the ORAC values, which are measures of antioxidant content, for the following types of rice:

That’s for 100g (3.5 oz) of the pure uncooked rice. For comparison, the same weight of raw kale is 1,770. That means red rice has twice the antioxidant activity as kale.

To be clear, those ORAC values are for the raw rice. So that doesn’t factor in the processing and baking, which inevitably destroys some of the antioxidants.

Still though, if you have a choice, it seems you might as well go with the healthier black or red rice. Plus if you like a strong flavor, the black bread is the best tasting GF option in their rice-based lineup. 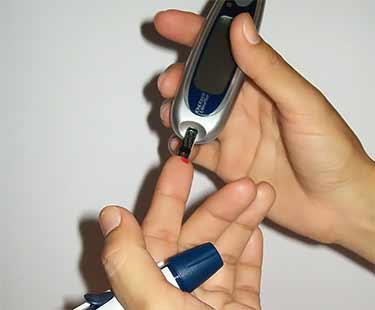 The bad news is that cooked or milled rice – regardless of type – tends to be a high glycemic grain.

They don’t report the GI measurements for these products, but all you have to do is look elsewhere at rice-based breads, pastas, and other baked goods to see they are a diabetic disaster!

For example, Australia’s number one selling GF brand – Country Life – reports a GI of 79 for their multigrain bread which uses rice flour as a main ingredient. (4)

And yes, even though Food For Life doesn’t use refined flours in their Ezekiel and Genesis line, their GF varieties are not flourless breads.

Sprouted For Life vegan breads are a good substitute for Ezekiel bread since they’re also made with different grains and seeds; quinoa, arrowroot, millet, almond, and chia.

What are the best GF alternatives?

The drawback with Food For Life gluten free breads is that they are generally dense (not fluffy) and don’t always survive the freezer well. Because they are dense, they are also calorically rich.

Every time we have bought their English muffins, when we thaw or heat them, we essentially get a wad of chewy dough.

If you want a real bread-like texture, options include Schar and BFree. Since these use more refined flours, you probably should limit yourself to a piece or two at a time. We like the less-refined version from Schar, which is their multigrain bread available on Amazon.

Where to buy Ezekiel

Ezekiel bread and the company’s GF variations can be found for sale at Trader Joe’s, Whole Foods, Sprouts, Costco, and many independent co-ops. The largest US grocery store chains such as Albertsons, Food Lion, Giant, Kroger, Meijer, Target, and Walmart do not currently carry Ezekiel or Food For Life breads. In the UK it’s much harder to find, but they do offer a delivery service for direct purchases.

For stores that sell them, you will typically find the Ezekiel and Genesis in the bread aisle or refrigerated section.

Since they expire quickly at room temperature, the GF varieties are always in the freezer section.

Even though they make over a dozen varieties, we have never seen a store carry all of them. You will be lucky to find 4 or 5. The brown rice, black rice, and raisin pecan seem to be readily available. The Sprouted For Life “trio of health” breads are newer and you typically only see stores carry one or two flavors. Their yeast free breads are hardest to find.