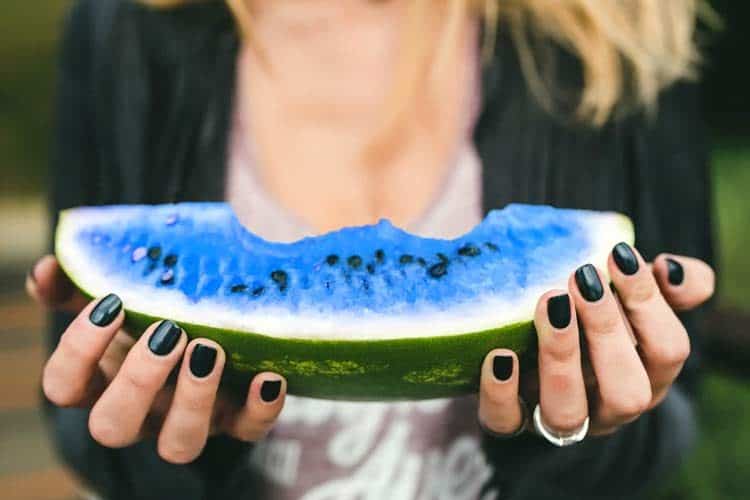 Is Blue Watermelon Real? The “Moonmelon” Is 2nd Biggest Hoax

How many different colors of watermelon are there? For the outside skin, hues of green ranging from a subtle artichoke to dark shamrock are all natural. Some types are yellow. For the inside color of the flesh, red is most common, but yellow, orange, and pale green do exist.

What does not exist is flesh which is practically turquoise, like you see above.

Hoaxes have always been around, but the internet and Photoshop has certainly exasperated the problem. 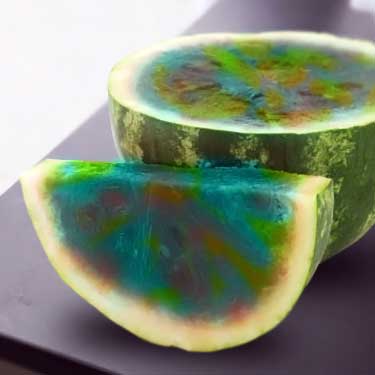 This rainbow multi-colored version appeared on Pinterest several years ago, supposedly having been created by a GMO lab in San Jose. The origin of this tye-dye fruit was actually an April Fool’s prank, by the website What About Watermelon.

Thirty years ago you could tell a fib to your friend and it may not travel further. Today, you can create an authentic-looking photo of your fib and convince millions of people online that it’s real. All from the comfort of your home.

Plus back then, if something looked fake, common sense would tell you it is fake. But with the advent of GMOs, suddenly an unnatural fruit or vegetable can seem plausible.

While not the #1 biggest fake food scam (we will get to that in moment) the success of the Japanese moon melon definitely ranks up there. By our calculations, it’s the 2nd most successful fruit or vegetable hoax of the last decade.

When did it start?

Many online sources claim 2011 or whereabouts is when the moonmelon hoax started. Since Snopes, Tumblr, Yahoo Answers, and Pinterest all published stories or photos that year, it seems like a good estimate.

The reality is that this one has been going on much longer than that.

Now it is true that calling them moonmelons didn’t start ’til 2011. Before that evolution in the story, they were just called by their color. Take a look at the Google trends for blue watermelon. As you see, it was almost just as popular in 2009 as it was in 2011.

The longevity of this flimflam has spanned a full decade now. The chart you see above covers 2007 through 2017. However the trend through 2020 is still intact.

And 2011? Even with all the press or media coverage back then debunking the myth, the belief of it apparently kept growing. Here we are, a full 9 years later, and it might be even more popular today than it was back then, at least based on the chart pattern.

Why folks fall for it

There are 3 reasons why this particular hoax has been going strong and in our opinion, will continue to.

But there is 1 big mistake the perpetrators made with this myth, which might lead to its downfall sooner rather than later. More on that below. 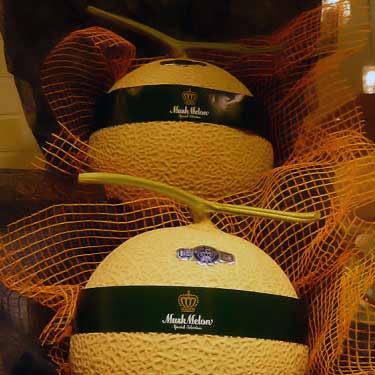 Here in America, honeydew and cantaloupe are typically thought of as lowbrow. It’s that filler making up 80% of the fruit salad, when all you really want are the blueberries and strawberries! Of course, only a couple of those are in your dish.

The mindset in Japan is the opposite. For one, they actually hate eating the skins of fruits and have a weird habit of peeling everything.

Over there, if you bite into an apple with the skin on, you will get some strange stares.

Considering that, it’s no surprise that melons – which everyone eats without the rind – are so popular among the Japanese.

Actually, they’re obsessed with them. In Japan, you can find find about any food or drink in a melon flavor.

Buying them fresh can be comparable to shopping for a fine wine. The perfectly round and flawless fruits can sell for the equivalent of hundreds or even thousands of dollars.

If you’re going to make up a story about this fruit, it’s only natural to connect it to this country. Hence, the Japanese moon melon name sounds legit.

In fact, you almost would expect something like a blue melon to come out of Japan. After all, these are the same folks who grow them in clear glass boxes. so they form the shape of a square or heart…

Whole Foods is expensive, but not even they put bubble wrap under their pricey produce or protect it with plexiglass covers!

And rather than run over to Walmart to pick one up, in Japan they are sold at high-end department stores. When was the last time you saw a melon for sale at Bloomingdale’s?!

The name is confusingly similar to not just one, but two real plants.

The red moon melon really exists, though it’s nothing exotic looking. Red moon is a cultivar which is a cross between a Western and French muskmelon (cantaloupe). So despite its mysterious name, it just looks like your run of the mill cantaloupe, or at least to the non-botanist it does.

Moon and stars watermelons are totally legit. You won’t find a wiki for it, but this fruit is authentic. Unlike red moons, these heirloom melons actually look quite bizarre.

They’re non-GMO and are often grown organically in the backyards of folks who buy the seeds. The history of the Sun, Moon and Stars watermelon – which is its official full name – dates back to 1924, when the cultivar was introduced by Peter Henderson & Co. of New York.

This is the Cherokee version, which is elongated. The Van Doren variety is round, in the shape of a normal watermelon. Photo credit: Nadiatalent [CC BY-SA 3.0], via Wiki Commons

It’s the same species as a traditional watermelon (Citrullus lanatus) but a unique inherited genetic trait with the seeds is what produces the spotted pattern. Each is covered with tiny pea-sized yellow “stars” and almost always, there will be one big yellow patch somewhere on it, which is referred to as the moon.

You sometimes hear this cultivar called Van Doren, because in 1981 a man named Merle Van Doren of Missouri started sharing his seed with Seed Savers Exchange. That’s a charity which promotes the preservation of heirloom seeds.

In the decades leading up to that, no one was selling any, so Mr. Van Doren was responsible for re-introducing them to the public.

The inside of this fruit looks different too – it’s more pink than red. If you want to buy moon and stars melon seeds, you can pick them on Amazon. 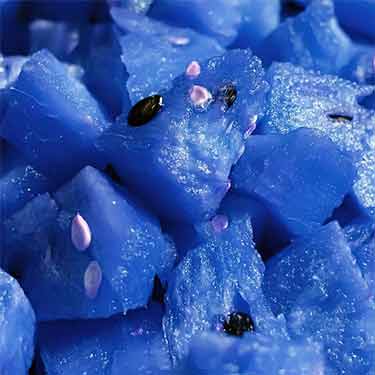 Agreement on politics is sharply divided, however there is one thing that Americans are more in agreement on; only 28% of American women and 47% of men believe that eating GMO food is safe. That’s according to a Pew public opinion poll (1).

With so much outrage over GMO foods, you will naturally have tons of blogs and sites dedicated to fighting them.

They latch onto any story that can be used against GMO and they don’t always do their fact checking beforehand.

When these internet hoaxes about bizarre foods spring up, they’re quick to publish. Natural News was stupid enough to fall for the number one hoax (below).

Ironically, this particular scam didn’t even involve a GMO. At least the original blue watermelon’s history doesn’t appear to mention that. The backstory was that this rare fruit was only grown by a few farmers in Japan. The scientific name of the species was alleged to be Asidus.

Aside from its distinct hue, the taste of the moonmelon was also claimed to be different – causing whatever sweet you eat after it to taste sour. Salty foods will change flavor to become bitter. Of course, this was all fiction.

By the way, are GMOs bad? As much as we hate to admit it, some may actually be healthier for you since they allow for the farmers to use less pesticides.

If you pay attention to these scams, you start noticing a pattern. The color of an exotic new fruit or vegetable is almost always the same… blue!

From blue tomatoes to blue raspberries, it’s really starting to get old.

As these mythical foods continue to get shot down, people begin growing wary of any alleged new fruit or veggie which is associated with that color. Even if you try calling it a synonym like azure, sapphire, or cerulean.

Ultimately, this may lead to putting a lid on this made-up melon. Even if it died tomorrow, it will still reign as the #2 champ.

The #1 all-time most successful hoax, based on traffic and media mentions, was the blue strawberry.