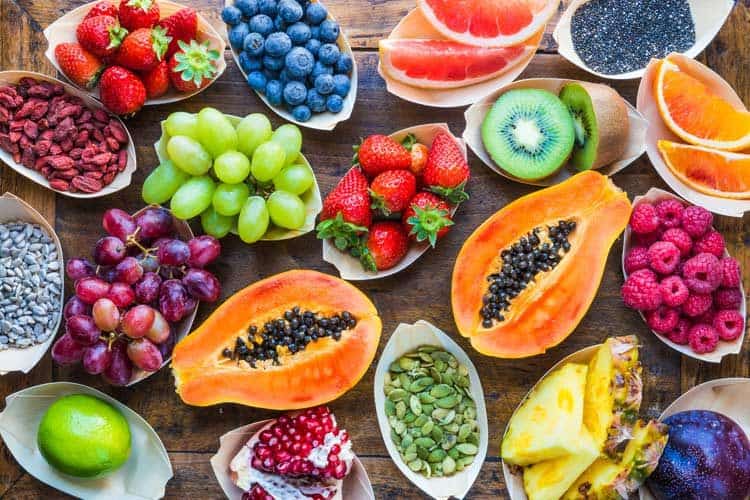 Highest Protein Fruit: List of The Top 40 Richest In Protein

Does fruit have protein?

Most people think it doesn’t or that it has very little.

It is true that most types are not a rich source but if you compare them to foods like meats, legumes, and grains, on a protein per calorie basis, some varieties of fruits actually rank quite high in terms of how much they contain.

Which fruit has the most protein?

Goji berries, which are 16% protein. That equals 4 grams per 100 calorie serving.

We included the dried variety in our chart since that is the most commonly consumed form in the United States. If basing the protein content on weight, it is true that fresh goji will have significantly less than the same amount dried. But in either form, how much protein they have per calorie will remain the same; 4 grams per 100 calorie serving.

To put this in perspective, goji has over half the amount of protein as ground beef!

It’s not just goji berries that are exceptional. The truth is that there are tons of plant-based foods which have a rich concentration.

There are many vegetables which have higher amounts than the beef which is reflected above. Since the definition of a serving size can vary greatly and is largely a personal preference, we calculated and ranked this list using the amount of protein in fruits per 100 calorie serving. That’s the most accurate way to present the data.

For your convenience though, we also included typical serving sizes since some are less practical to consume in larger quantities, like lemon peels.

How to best incorporate these into your diet

Many of these are quite nutritious and contain potent antioxidants. That being said, relying on high protein fruits alone as a primary source would not be a good idea. This is because many – especially the tropical varieties – have high amounts of sugar. Sure, their glycemic impact is lessened by the fiber content, but it still would be unhealthy to consume vast amounts of them at a given time. Even more so for diabetics! 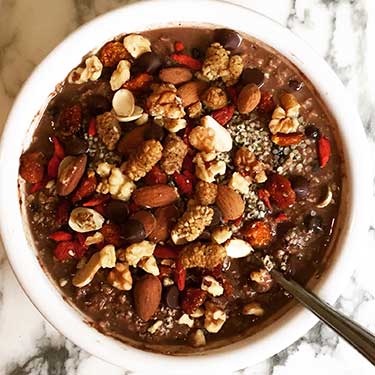 Almost daily, this is our breakfast here at Superfoodly. An easy recipe of instant oatmeal + cacao powder, almonds, walnuts, hemp seeds, and dried fruit (including goji and mulberries). It only takes 5 mins to make and is jam packed with protein and antioxidants.

For that reason, you should view these as more of a supplemental protein source. They balance out nicely with nuts and seeds. Why? Because fruits have lots of sugar and almost no fat.

Meanwhile nuts and seeds are the opposite – almost no sugar and high fat. Combine the highest protein nuts with the likes of dried goji and mulberries to create a nutritious dry snack mix or a boost for your morning oatmeal.

People are often quick to point out that many types of meat are a good source of the essential aminos, including the Branched Chain Amino Acids (BCAAs) leucine, isoleucine, and valine.

Often times, those same people assume plant-based foods are not a good source. Nothing could be further from the truth.

Even if you ignore quinoa and all the other complete plant proteins, the fact of the matter is that anyone eating an even semi-reasonable variety of different plant-based foods is getting all of the essential aminos, including the BCAAs, in plentiful quantities. Your body stores aminos for up to 24 hours, so you don’t even need to be consuming them all in the same meal.

For example, take something as simple [and cheap] as rice and beans. Rice is high in methionine but low in lysine, while most beans are high in lysine and low in methionine. Put both on your Chipotle burrito and you now have a complete amino profile in a single meal. The same holds true with fruit protein, albeit in much smaller quantities.

Conveniently, goji berries have a low amount of sugar – 12.8 grams per 100 calorie serving. The 3.6 grams of dietary fiber (14% of your DV) slows that sugar absorption too – a Glycemic Index (GI) rating of only 29 according to Navitas Naturals, which is one of the largest sellers in the US.

Dried mulberries taste very sweet, which is somewhat deceiving. Yes, 18.9 grams of sugar seems like a lot, but thanks to its ample fiber, it has a reasonable GI rating. But that’s not all, as studies have suggested that mulberries and their leaves are rich in a compound called 1-Deoxynojirimycin (DNJ), which is a glucose inhibitor that might benefit blood sugar levels (3).

Plus, they’re one of the most potent sources of resveratrol. Both mulberries and goji are among the top 10 highest protein fruits, which is why we at Superfoodly include one or both in our breakfast almost every day.