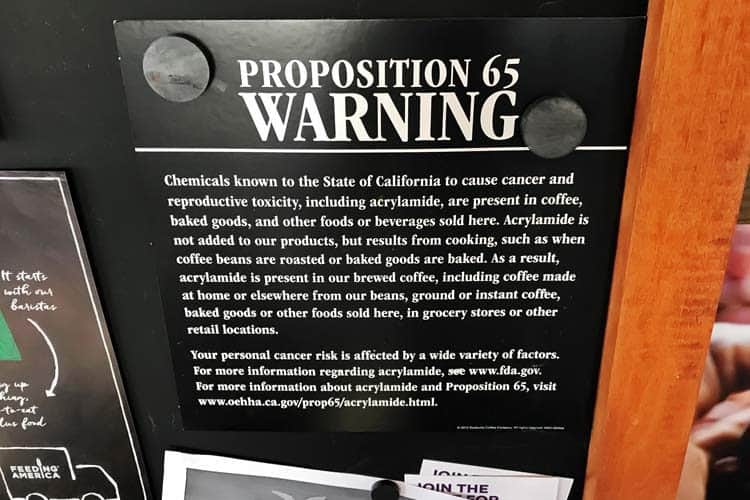 The Healthiest Coffee Brands & How To Brew It Safer

The healthiest coffee at Starbucks, Dunkin’ Donuts, McDonald’s, Tim Hortons and Costa will all be the same thing; plain black coffee. Without creamer or added sugar, it will be fewer than 5 calories per cup. If available, dark roast will be better, because it contains less acrylamide.

Acrylamide is that substance you may have heard about in the news lately. It’s driving fears that coffee causes cancer. It’s the reason for the Prop 65 warning labels and signs seen throughout California at Starbucks.

It is true that acrylamide causes DNA mutations, and therefore, can increase cancer risk (all cancer starts with a DNA mutation).

However, there are a plethora of other things you eat and do daily which also cause DNA mutations. 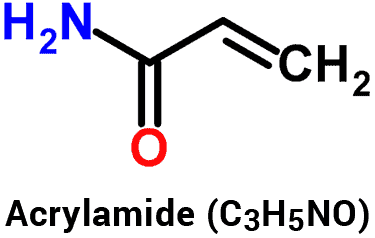 Plus, your dietary exposure of acrylamide from coffee should be the least of your concerns, relative to some other sources.

It’s even in the water you drink, because acrylamide is one of the chemicals regularly used at water treatment plants. (1)

Though the biggest reason to not cut out your coffee is because of how much acrylamide it contains relative to many other roasted, fried, and baked foods.

Starbucks, Folgers, 7-Eleven, and Dunkin’ Donuts all have been reported as having between 5 and 13 ppb (parts per billion) of acrylamide, per FDA testing.

Should you really be in a fuss about that, when the same data sets report that Health Valley oat bran graham crackers are a staggering 1,540 ppb?

That’s not a typo. They’re 220 times higher than the brewed Columbia blend from Starbucks, when comparing equal weights.

McDonald’s black coffee is 8 ppb. Why get in a tizzy over that, when their French fries have 428 ppb? (2)

It seems like if you simply forgo fries, crackers, and the like, you will be avoiding exponentially more acrylamide than what you get from drinking coffee every day.

Though because we live in a land of trial lawyers and class action litigation, the media is strung along by their narrative… while neglecting to advise us on the more prudent dietary decisions we should be making!

Unlike fries, coffee is good for you in many ways, including being a major source of antioxidants . Even when you factor in this side effect of acrylamide exposure, the good from this beverage can far outweigh the bad.

Whether at home or at work, the healthiest way to brew coffee will be to use a standard drip machine, with an unbleached brown paper filter. The reason drip is safer than French press is because less particulate matter from the roasted beans end up in the coffee. Acrylamide is higher in the grind.

A paper filter catches more of the particulate matter, versus the mesh screen on a French press or pour over coffee maker. 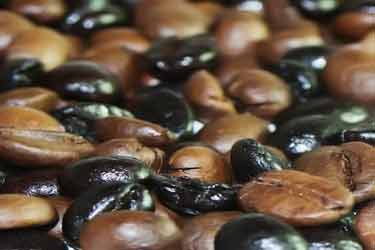 Dark roast coffee is better for you. It contains less acrylamide than light and medium roasts. This may seem counterintuitive because dark beans are roasted more, but that’s because acrylamide is highest during the intermediary stages of roasting.

It’s called the Maillard reaction, which is the chemical reaction that takes place between sugars and certain amino acids when cooked.

The combination which creates acrylamide requires:

Potatoes are high in asparagine, which explains why fries and similar forms produce such high concentrations.

The health benefits of asparagus, which asparagine is named after, remain intact so long as you don’t cook them with carbs. If you do, then you have the combo that can create acrylamide.

Coffee beans, which are technically a berry and not a bean, do contain both carbs and asparagine. This is why it creates the cancer-causing compound, acrylamide.

To reduce acrylamide exposure, the healthiest coffee beans to buy will be dark roast. Ideally espresso roasts, because those are the darkest.

For creamer, a non-sweetened plant-based dairy alternative is a good choice. Unlike the milk and cream from cows, almond milk, cashew milk, macadamia milk, and other vegan versions will be cholesterol free, since they’re made from plants.

If you insist on sweetening your coffee, use monk fruit which does not affect blood sugar. Stevia is not ideal because like acrylamide, it’s mutagenic. Meaning, one of the stevia side effects is DNA mutations.

You can enhance the flavor of coffee without creamer, sugar, or other sweeteners. Spices like Ceylon cinnamon and Madagascar vanilla bean powder add few to no calories, yet they’re packed with flavor, antioxidants, and may bring additional benefits.

When it comes to regular vs. decaf, the answer as to which is healthier largely depends on the individual. Aside from boosting mental clarity and performance, the molecule caffeine is an antioxidant. Contrary to popular opinion, in moderate amounts caffeine has not been proven to raise systolic or diastolic blood pressure when regularly consumed by healthy individuals.

Some people, including those with certain heart and cardiovascular conditions, as well as people who don’t regularly consume caffeine, may experience an increase in blood pressure. For that segment of the population, decaf coffee is a better choice.

For everyone else, 2-3 cups of caffeinated coffee per day should be okay. Given that the half-life of caffeine ranges from 3 to 7 hours, you should switch to decaf after the morning, to avoid sleep disturbances at night. (3) (4)

Which coffee brands are healthy?

Wherever in the world you are, the healthiest brands to buy will be those made with Arabica bean, not Robusta. That latter tends to have higher levels of acrylamide. A dark roast made with USDA certified organic beans (or the equivalent for your country) will be ideal.

Starbucks and Caribou may not have organic, but it arguably would be better to drink one of their dark roasts, versus an organic light roast.

People obsess over organic food, without understanding or appreciating the extremely short half-lives of most pesticides used on plants.

The following 2 brands are good choices: 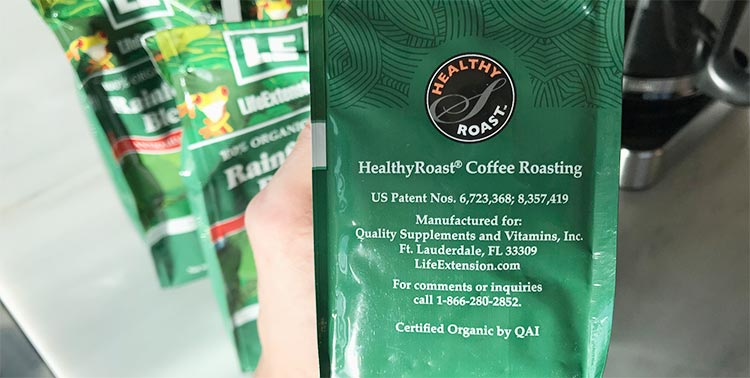 Life Extension brands makes an organic coffee with the most antioxidants. That’s because they use a patented process called HealthyRoast. It retains the polyphenols which are normally destroyed when the beans are roasted.

Chlorogenic acid is the primary polyphenol in coffee. A fair amount gets destroyed during roasting.

On the flip side, the roasting boosts levels of trigonelline, another potent antioxidant. It also creates melanoidins, which are responsible for the aroma of coffee and have considerable antioxidant activity.

HealthyRoast works by soaking the raw beans prior to roasting. This allows for polyphenols to leach out into the water. That water is saved and after roasting the beans, the water is added back and they are dried at a low temperature.

In short, you get the best of both worlds; the antioxidants from green coffee, as well as those from roasting.

Previously, there were two companies that licensed HealthyRoast. The other was Caffe Sanora: 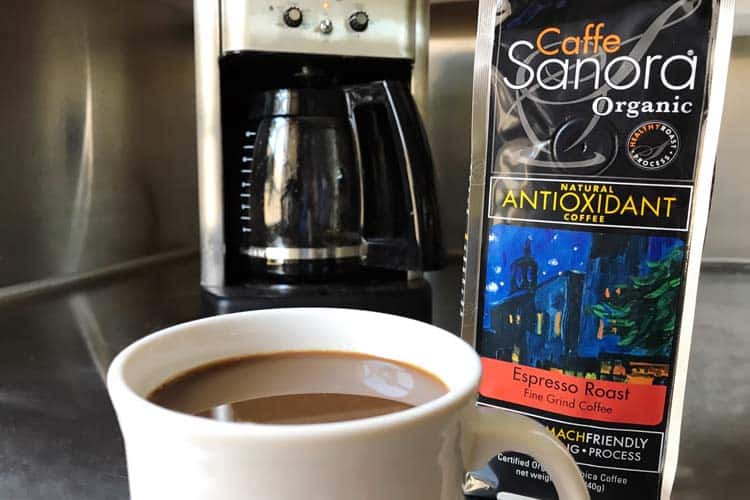 What happened to Caffe Sanora?

In 2019 the company shut down. Since they were a brick and mortar coffee shop in Colorado that only did mail order on the side, presumably the business model just wasn’t working out for them. Both the physical cafe and mail order have closed.

Previously branded as Rich Rewards, they slightly modified it and call it Rainforest Blend. It’s now USDA organic and has an additional health benefit; it’s less acidic, making it easier on the stomach.

We love it so much, here’s a pic of our recent order: 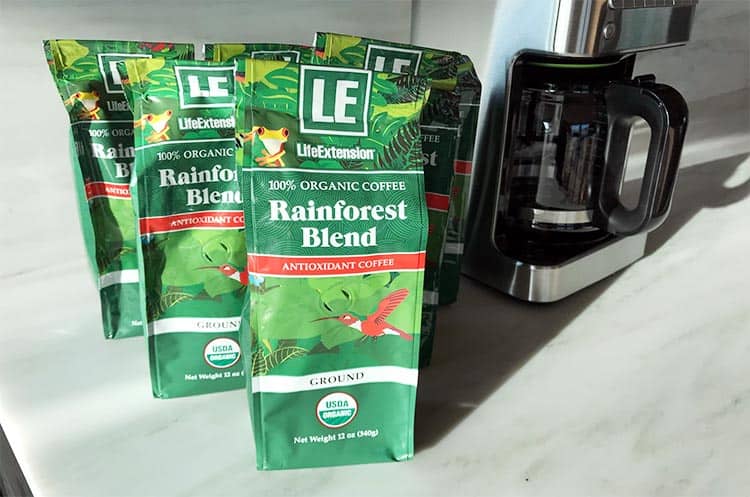 Stock up and save by getting it on Amazon’s Subscribe & Save program. You can buy Rainforest Blend ground or whole bean. 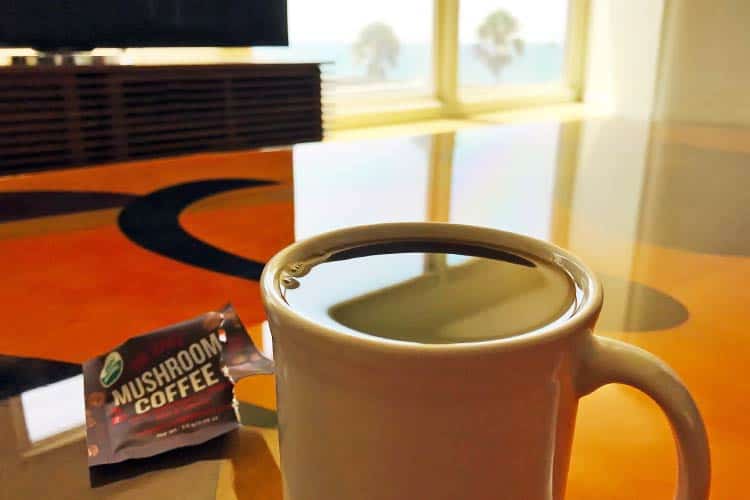 This may sound strange but before you write it off, know that (a) you don’t really taste the mushroom in it, and (b) the fungi adds additional benefits.

The latter is known for its high antioxidant activity. Lion’s mane is a nootropic prized for it’s anti-stress and soothing effect. Cordyceps is a well-known booster of energy and athletic performance.

Results of a UCLA double-blinded and placebo-controlled trial reported that cordyceps ‘improves exercise performance” as seen below, in pitting it against placebo: 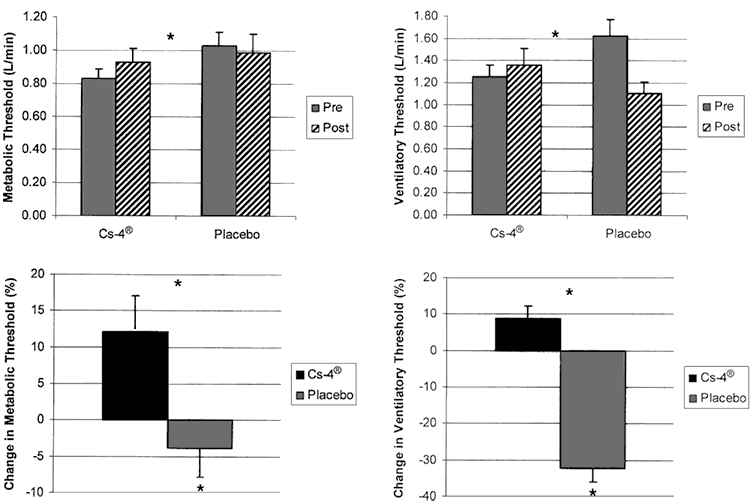 While we don’t drink Four Sigmatic daily, we do on occasion and speaking of cordyceps, we supplement every morning with these capsules by Doctor’s Best.

The brand Four Sigmatic is available as instant coffee, sold in envelopes of individual servings. They’re great for at office or work, where you may not have your own drip machine. Try the cordyceps and chaga version. It’s USDA certified organic.

For coffee you brew at home, the best choice will be Four Sigmatic organic dark roast with lion’s mane and chaga. It’s available pre-ground on Amazon. For decaf, try their reishi and chaga blend.

These statements have not been evaluated by the Food and Drug Administration. This product is not intended to diagnose, treat, cure, or prevent any disease.
825
SHARES
FacebookTwitter