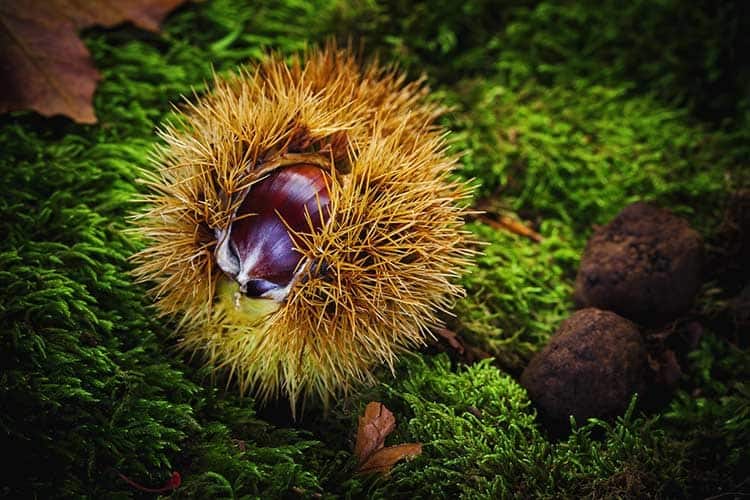 With over 900% more antioxidants than cashews, pecans may seem like the best to eat. But which nuts have the highest fat content? Pecans are tied for first place in that category, too – along with macadamia. They’re both high calorie and low protein.

What nut is the healthiest? That depends on your definition of healthy.

Unfortunately, almost all websites which compare their nutritional value tend to base their top 10 lists on only one factor, such as which nut has the most protein, fat, fiber, or calories.

And almost no one includes ORAC values (antioxidant content) in their rankings of what’s most nutritious.

Whether it’s high protein nuts you want, or just good low calorie and low fat choices for snacking and weight loss, here’s how to make the top choice for your diet.

With the exception of the lowest (chestnuts) all nuts are extremely high calorie, relative to most other foods.

Even pistachios, which are marketed by a particular food company as being the lowest calorie nut, is technically true if you’re comparing them against the most commonly snacked on, but it’s really only telling half the story.

Chestnuts are such an outlier from all the others, they need to be evaluated separately. They may be among the top 10 healthiest nuts, but they’re definitely not among the 10 most popular. In fact, many Americans go their entire lives without eating one and you’ll be hard pressed to find them for sale, outside of perhaps a cameo role in an obscure Thanksgiving recipe. So our 10 best list actually consists of 11, since chestnuts are such an anomaly in our diet that no one eats.

The calorie content of raw pistachios, cashews, peanuts, and almonds differs by less than 4%. If we were talking 40% then that should be a major factor in your decision, but with so little difference, that’s when you should choose based on the 1 or 2 other factors which are important to you, such as the most antioxidant content, the most protein content, or another nutrient. Among those four the lowest are cashews at 553 calories and the highest is almonds at 575 calories (per 100 grams / 3.5 ounces).

Compare hazelnuts, walnuts, Brazil nuts, pine nuts, pecans, and macadamia as a group. With a caloric difference of only about 13% between them, the lowest and highest calorie are hazelnuts and macadamia, respectively. With these five – since their caloric impact is quite similar – choose among them based on whichever nutritional factor is most important to you.

Overwhelmed by all the factors to choose from? Here are our picks based on what you desire most.

With over 30% higher than the #2 on the list, this choice is straight forward: pecans are the nut that has the most antioxidants by far.

However, don’t buy roasted because that creates advanced glycation end products (AGEs). Those damage and mutate your DNA.

Instead, go with raw pecans. Here’s a good value on Amazon we recommend.

For protein, bodybuilding, and gaining muscle

Even though peanuts have the most protein, they may or may not be your right choice.

Why? If you’re building muscle, you want your Branched Chain Amino Acids; leucine, isoleucine, and valine. Those 3 in particular help make the most of your protein intake, by promoting muscle protein synthesis and therefore helping you build your muscle and bulk up mass, if that’s what you want. 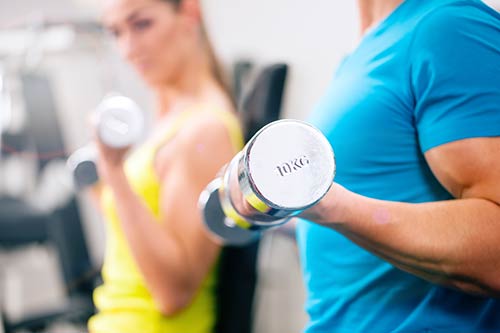 Based on the BCAA content, the best nut for bodybuilding would not be the one highest in total protein (which is peanuts).

Instead it would be pistachios, which is highest in leucine, isoleucine, and valine. They’re our recommendation for building muscle and bulking up.

That being said, you are getting 17% less total protein with pistachios than peanuts. So if you’re already getting plenty of BCAAs in your diet, sticking with the absolute highest protein option – peanuts – would make sense.

As with pecans and any other nut, go with raw. These are hard to find at the store but you can get them on Amazon. We buy those all the time.

And if your fitness goals are burning fat to get ripped rather than get big, the extra BCAAs are unnecessary. However there are many other benefits of pistachios for everyone.

This is kind of like asking what’s the ideal beer for an alcoholic, as there’s not really a good answer!

Among the ten, none of them are low calorie. If you’re serious about losing weight it would probably be optimal to cut them out of your diet altogether, at least for the first few weeks as you drop some pounds. 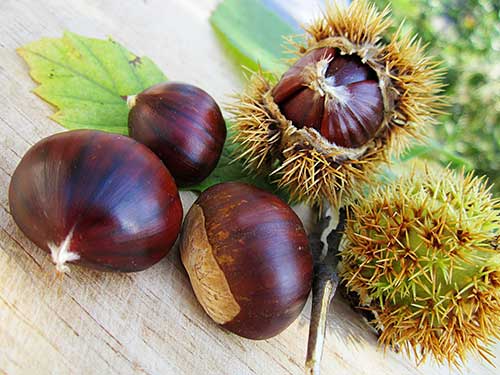 The outlier – chestnuts – would be an exception.

With over 60% less calories than #2 and #3 (cashews and pistachios), there is no debating… chestnuts are best for weight loss. They’re extremely low fat in comparison.

If you’re diabetic it’s worth noting they have the most sugar – 9 grams of sugar per 100 grams. So are they still a good and healthy nut for diabetics? With a glycemic index (GI) of 54 for crushed & uncooked, they may not be great, but they’re not the worst choice you could make for snacking, that’s for sure!

If you’re on a keto or low carb diet keep in mind that chestnuts have the most carbohydrates by far. All the others are low carb.

What do chestnuts taste like? Without flavoring, many people are not fans, yet others love them. Can they be eaten raw and uncooked? Yes, if you use a sharp knife to peel them, but even fewer like raw chestnuts and hence, why you only hear about the roasted version. A description of their taste would be a starchy firm potato, with a hint of hazelnut flavor, and a bit of sweetness. Love ’em or hate ’em, you won’t know ’til you try!

When you’re dieting, you don’t want to feel like your stomach is empty. That’s why the goal is to pick out the most nutritious foods that are filling, but have the least amount of calories.

That’s exactly why whole food, plant-based diets without refined oils and sugars work so well for weight loss – you can still pig out, but without a lot of calories. You’re left satisfied rather than starving.

And yes, it is true that the other ten nuts are whole foods so long as they’re not cooked in oils or have added salt. But nuts and seeds are the most calorically dense whole food there is. When we say you can still pig out, we’re referencing fruits and vegetables!

With the other 10, you’re eating a lot of calories but not getting as much satisfaction from them, since their mass/volume is so small. 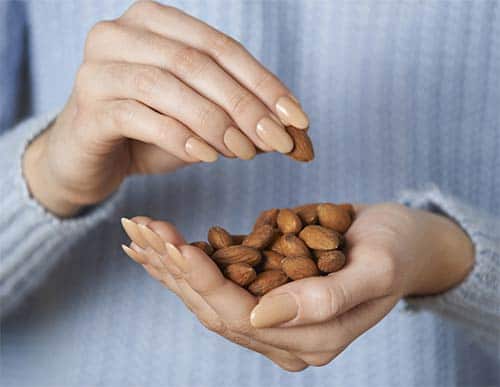 But there is some good news about the the other 10. Almonds are often demonized for being high calorie but that’s a myth, because as you see in the table above they only have 3% more than pistachios. They’re the best high fiber option – 20% more fiber than all the others on the list.

Perhaps that may be one reason why a Purdue University study found that as counter-intuitive as it seems, the participants who ate 1.5 oz per day of lightly salted, dry roasted almonds (250 cal. worth) actually had less appetite throughout the day and didn’t gain weight (2).

And there’s more good news: Almonds, walnuts, and peanuts – which are often frowned upon for dieting – have actually been shown to help with weight loss because even though they’re high calorie, some fat is lost through fecal matter (you poop it out, unabsorbed) and they cause increased energy expenditure (higher metabolism) as suggested in the study: The effect of a calorie controlled diet containing walnuts on substrate oxidation during 8-hours in a room calorimeter (3).

What are least healthy of of the bunch? Whether it’s low calories/fat, high-protein, or antioxidants you’re after, there are couple contenders which are total losers for these four popular categories.

Compare macadamia vs. pecan… similar calories and protein content, yet pecans have over 10 times more antioxidants. Sure, macadamia taste great, but that’s because they’re basically pure fat on your tongue with little redeeming qualities to go with it. Skip ’em.

Compare pine nuts vs. walnuts… also similar calories and protein, but walnuts have over 18 times more antioxidants plus high amounts of Omega 3 fatty acids, which are good for heart health. The best nut for pesto is not pine nuts. Thankfully the basil still has a high ORAC value, but choose something other than pine if you want a more healthy alternative. Aside from nearly no antioxidant, toasted pine nuts also have high amounts of the carcinogen acrylamide.

Peanuts can be dangerous because they grow in the ground, like a potato. In fact they’re technically a legume. Because they grow in soil, they can be contaminated with aflatoxins. The U.S. has strict testing for these but elsewhere in the world it’s more risky. For the best kind, try jungle peanuts.

Brazil nuts are a total disaster… guess what, that advice you heard about them being a great source of selenium is also their biggest pitfall. They’re the absolute worst choice for snacking! Not only does a handful of Brazil help you expand your waistline thanks to being 89% fat, but it can also easily lead to selenium poisoning and give you extra radiation. They’re the least nutritious all things considered.