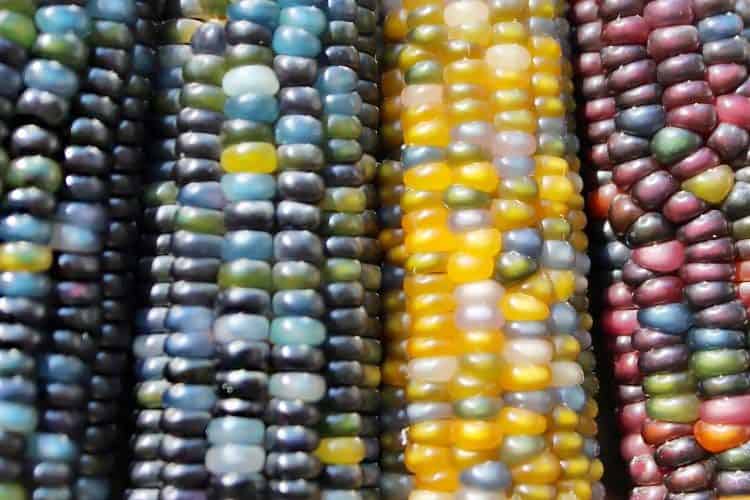 Health Benefits of Blue and Purple Corn vs. Yellow

When you think of superfoods, it’s unlikely you’re thinking of this grain.

In fact, most people frown upon corn. The general perception is that they’re kernels of carbs, without much nutritional value.

Are grains good for you? They’re healthy, as long as you eat the right forms.

When it comes to maize, yellow is just the start. You have red, white, and blue, plus other exotic colors. Here’s a look at their similarities, differences, and which type is the healthiest to eat.

The basic nutrition facts for whole kernel blue corn will be the same as white and yellow corn. One large ear (7.75 to 9″ long) will be 113 calories and have 25g of carbs, 2g of fat, 4g of protein, and 3g of fiber. Even though it’s called sweet corn, there’s only 5g of sugar.

For essential minerals, the highest are phosphorus at 9% of daily value, magnesium at 8%, and potassium at 7%.

For vitamins, the highest based on percent of daily value is vitamin C at 11%. Next is niacin at 10%, vitamin B6 at 8%, thiamin and folate at 7%, vitamin A at 6%, and riboflavin at 4%. Only trace amounts of vitamin K and E are present in corn.

Since heat destroys ascorbic acid (vitamin C), the amount for it reported by the USDA is impressive, because it was specifically measured after cooking it in boiling water. (1) (2) 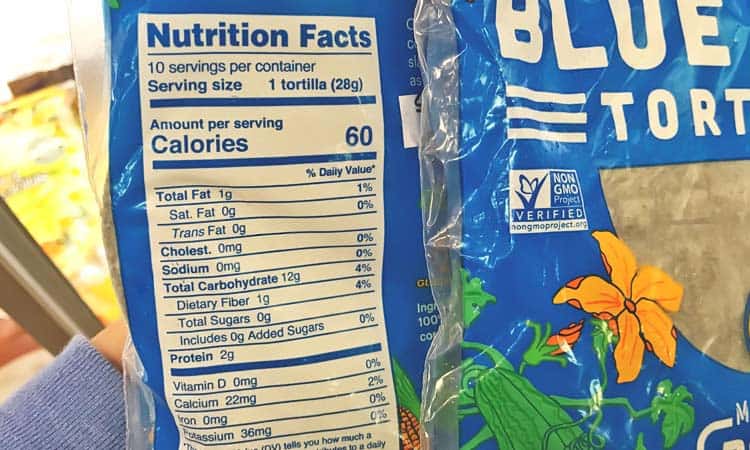 Nixtamalization is the traditional Aztec process of cooking corn in calcium hydroxide or lime to make tortillas. This does help release the niacin but that aside, it doesn’t materially alter the facts. When they’re made using just corn, water, and lime – such as those pictured above – you’re basically viewing the nutrition facts for blue corn flour.

While these values can vary slightly between color and cultivar, the differences are too trivial to sway choosing blue vs. yellow.

There are other major differences, but you won’t find them on any nutrition or ingredients label…

It’s also known as purple corn and Hopi maize, because it was a staple of the Hopi Native Americans, located in present-day Arizona, New Mexico, and Colorado.

It was also cultivated throughout the Andean region of South America in Peru, Bolivia, Ecuador, and Argentina. The varieties down there are more purple than the North American Hopi varieties. (3)

Whether yellow or colored, all come from the same plant species; Zea mays L. Unlike the heavily domesticated lighter varieties we are accustomed to, these other types were not cultivated to produce the biggest cobs with the most uniform kernels. Rather, they maintain more of their natural traits of being smaller and funkier looking.

One form of funkiness includes shades of the rainbow, especially the colors of cobalt, azure, and indigo.

Why is blue corn blue?

It’s due to their anthocyanins. That’s the same class of polyphenols which make blueberries blue and raspberries red. There are hundreds of different types and their color is largely dictated by the pH of the plant. No corn that’s blue or purple is genetically modified to have this trait. It’s real and comes naturally.

The anthocyanins in red, purple, and blue corn appear to be largely responsible for the health and medical advantages they’re being studied for.

To be clear, the following benefits have not been tested or proven in humans. So far, it’s lab studies and animal models only. This food and supplements made from it should not be used to treat, cure, or prevent any disease.

With that said, let’s review what’s being discovered…

Based on ORAC values, which are a quantifiable way to measure antioxidant activity in the lab, here’s how the different colors compare:

Purple has nearly 14x more antioxidants than yellow corn! Your average blue corn will be about 3x higher.

Now there are a couple catches to consider: 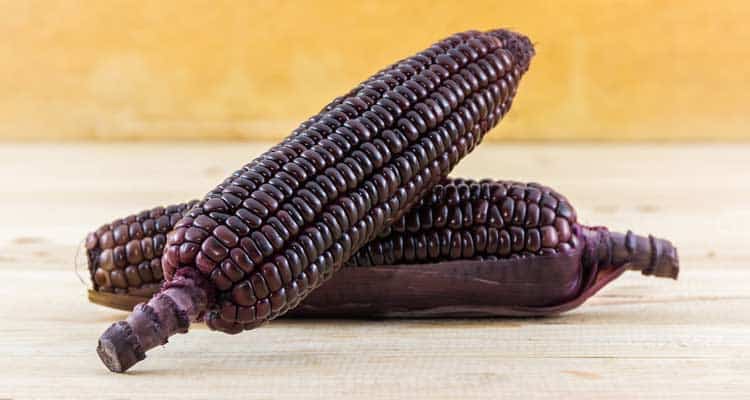 The darkest varieties, like this, have more pigment and therefore more antioxidants.

For comparison, blueberries are 4,669 for the same weight. So at least when raw, the blue corn has about 2/3 the antioxidant content and the dark purple has about 3.6x the amount. (4)

While those values reference the edible kernels only, even their corn silk or hair test higher, because they too contain pigments. 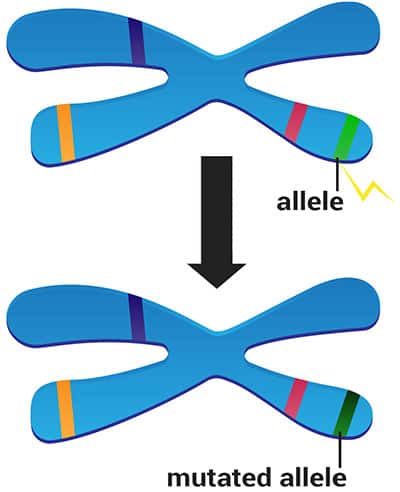 A mutagen is anything that alters your DNA, and therefore, increases the likelihood of a DNA mutation.

All cancers ultimately result from a DNA mutation, though to be clear, the vast majority of DNA mutations do not cause cancer.

However, they are linked to the aging process and that’s why anti-aging/longevity lifestyles aim to limit things that increases DNA mutations. Smoking, alcohol, and stress are all factors that act as mutagens.

Both the water fractions (water derived) and acetate fractions (acetate derived) from purple corn have demonstrated anti-mutagenic activity in a dose-dependent manner in lab experiments.

The antioxidants in this vegetable are often credited as the reason why, but there may be other mechanisms that contribute. (5) (6)

The most abundant anthocyanin in purple and blue corn is cyanidin-3-glucoside (C3G). Being that it’s such a potent antioxidant, it should come as no surprise that numerous animal studies have found it to inhibit inflammation in the body.

In a study out of China, where obese mice were fed a high-fat diet over a 12-week period, it correlated with less liver inflammation.

When high-carb and high-fat diets on rats were tested by Australian researchers, consumption correlated with lower inflammation-induced damage from metabolic syndrome, which resulted from their unhealthy eating. (8)

South Korean scientists report it may have an anti-inflammatory benefit and protective role in diabetic nephropathy. At least that’s according to what they saw when experimenting with cultured human cells. (9)

4. Being researched for anti-cancer potential

Doxorubicin is a common chemotherapy sold under the brand names Adriamycin, Rubex, Doxil, and Lipodox. In terms of its major side effects, the potential for heart damage is one of the most concerning.

Italian scientists gave this chemotherapy to mice, along with diets of either yellow corn or purple corn. For those getting the latter, it appeared to reduce heart damage (10):

Not much research has been done to evaluate the potential for direct anti-cancer activity.

The Japanese report that the purple pigments helped to inhibit prostate cancer growth in a cultured cell experiment. (11)

Ohio State University said that purple corn, along with other anthocyanin-rich foods like chokeberry, bilberry, elderberry, and purple carrot, all appeared to suppress colon cancer cell growth in their lab. (12)

Okay, so those are experiments using carefully crafted water and alcohol derived extracts. How about normal foods that we may eat, such as tortillas and taco shells?

Because 94% of the Mexican population consumes tortillas as a staple food, scientists from the Mexican government and a university there set out to try and answer that very question. 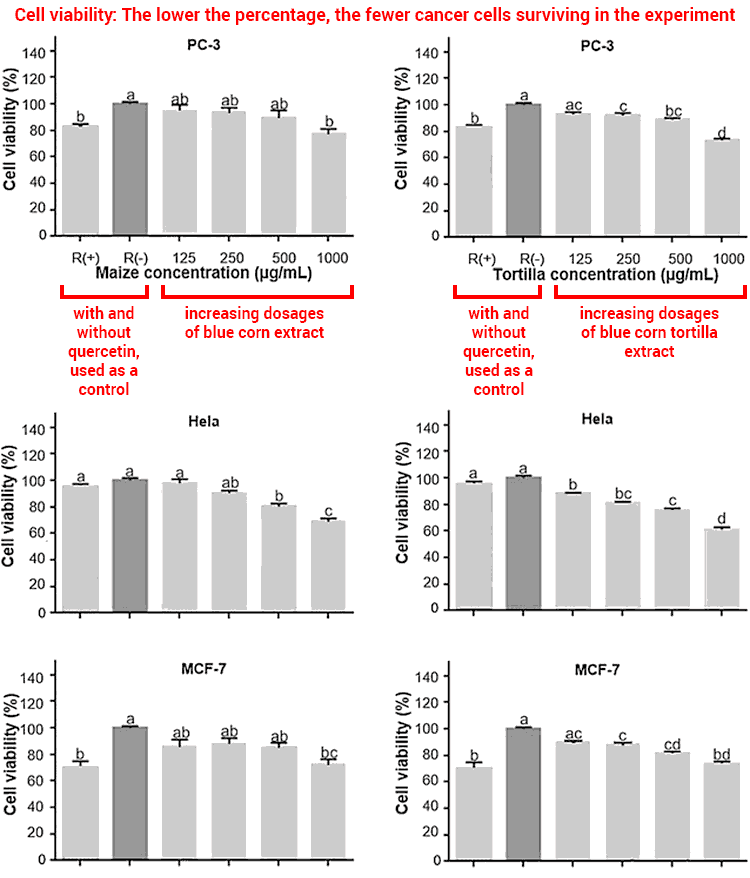 The results suggest that even after the traditional tortilla-making process, blue corn still exhibited antiproliferative activity in a dose-dependent manner. (13)

It’s important to emphasize this is in the lab and it’s totally unknown if this effect happens after being digested by the human body.

Due to their essential oils, many high ORAC superfoods – like spices – exhibit strong antibacterial activity. Your body’s healthy gut flora (probiotics) might be harmed by them.

Scientists from a university in Peru, and another in North Dakota, tested in the lab how purple corn interacted with probiotic lactic acid bacteria such as Bifidobacterium longum and Lactobacillus helveticus. It didn’t harm them. (14)

While not yet tested in humans, science suggests that just like watermelon and maca, this food might help get you in the mood.

That’s a quote from a study out of a Mexican university, which tested different dosages administered to male rats. (15)

Does it boost libido in humans? Try some and find out!

In hypertensive rats where the purple pigments were 1% of their diet, decreases in blood pressure and heart rate were seen versus the control group. (16)

This is a benefit that even has some human data to back it.

A small double-blinded and placebo-controlled trial was done in Peru:

They were split into two groups and given purple corn supplement capsules or a placebo. The dosage was taken once per day in the morning.

Everyone went through 4 different phases, lasting 2-3 weeks each, where they were tested with both the supplement and the placebo.

That’s their quote summarizing the results. (17)

People normally don’t think of any carb as being a weight loss superfood, but that might be one of the benefits blue corn has going for it.

Sorry, tamales are probably not the best form for this purpose!

Though when in the form of a pure powder or extract, someday it might be a hot ingredient for diet pills.

A Japanese university has reported that the type of anthocyanins found in colored corn (cyanidin or cyanidin 3-glucoside) seem to influence gene expression in a way that promotes lower body fat.

They used adipocytes, which are fat storage cells found around your connective tissue. When treated with these anthocyanins they saw:

“These data suggest that anthocyanins have a potency of unique therapeutic advantage and also have important implications for preventing obesity and diabetes.”

Blue corn tamales and cornbread recipes saturated with oils are far from healthy, but the science suggests they may at least be better for you versus their yellow corn counterpart!

A lot more research is needed before any medical benefits can be determined. Since there’s no evidence of toxicity or side effects from blue corn, you have nothing to lose from switching yellow corn masa flour to this variety. It also makes for prettier presentation of your food!

Where to buy blue corn

In Peru, you can buy it fresh on the cob. In America, we’re just scratching its culinary surface.

Purple blue corn, and to a lesser degree red corn, have been gaining traction at the grocery store in recent years.

It’s still unlikely you will find blue corn on the cob for sale. Not even specialty stores like Whole Foods are known for carrying it. Some farmers markets will sell it but that’s a needle in a haystack.

Most of us can only buy it in shelf-stable and ready-made foods such as tortilla chips, tortilla shells, corn flakes, bottled juices, and bags of flour or kernels for baking. 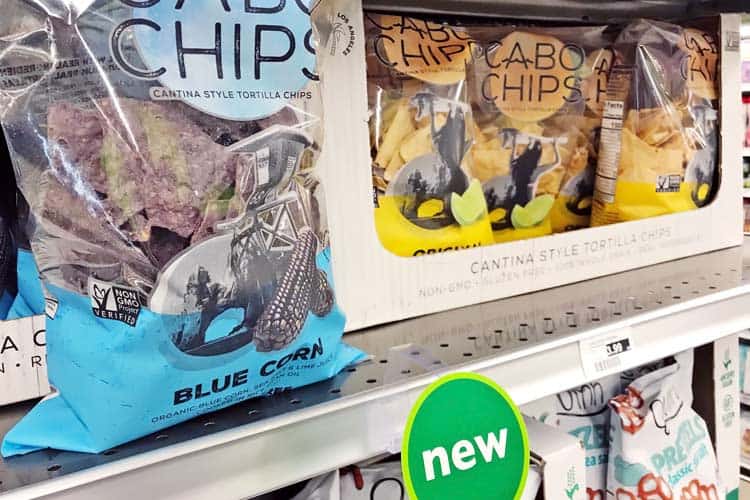 Compared to yellow corn chips, the blues may be better for you, but obviously chips are meant as an occasional treat.

Chips aside, here are some products on Amazon you can buy that incorporate this wonderful grain:

Cereal: You can get Back To The Roots organic stoneground cereal flakes which have relatively low sugar content.

Flour: Organic purple corn is the only ingredient, so it’s gluten free. Available in a 16 oz bag by Zócalo Peru.