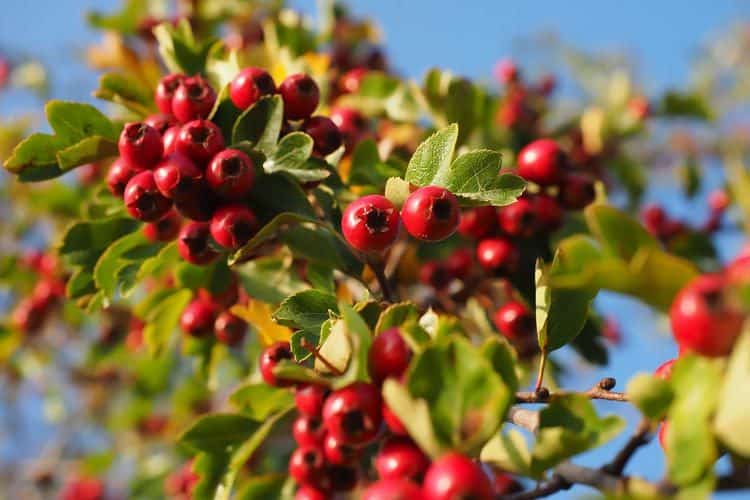 Today, a lot of people can’t even tell you what they are.

If you go back to the distant and no-so-distant past, you will discover this little red fruit has a rich history.

During the first century after the birth of Christ, the famed Greek herbalist Dioscorides wrote about its medical properties in De Materia Medica. A document which many say served as the framework for early European pharmacopoeia.

Over in China, the plant was included in the government’s first approved pharmacopoeia. That was published in 659 AD. It’s known as the Newly Revised Materia Medica (Xin Xiu Ben Cao) and The Tang Materia Medica (Tang Ben Cao). Hence, its history dates back to day one of Traditional Chinese Medicine (TCM).

During the 15th and 16th century AD, the respected Swiss physician Paracelsus touted treatments made from the berry.

Those are just a few of many examples. There’s also a rich history for medicinal uses of hawthorn leaves and flowers to make tea. (1)

What is hawthorn berry good for?

Unlike strawberries and blueberries which are hailed for both health and flavor, the hawthorn berry is primarily used for traditional medicine. It is believed to be good for supporting the heart and cardiovascular system. Hawthorn tea and extracts have been studied for this purpose.

You can eat hawthorn berries. The common or European (Crataegus monogyna) and Chinese hawthorn (Crataegus pinnatifida) produce red edible berries which aren’t poisonous. They’re tart and taste like an overripe apple. In the center is a large seed which requires removal, similar to a cherry pit.

Because the fruit is not very sweet and the large seeds make them difficult to eat, hawthorn juice and tea are the most common ways the fruit is consumed. 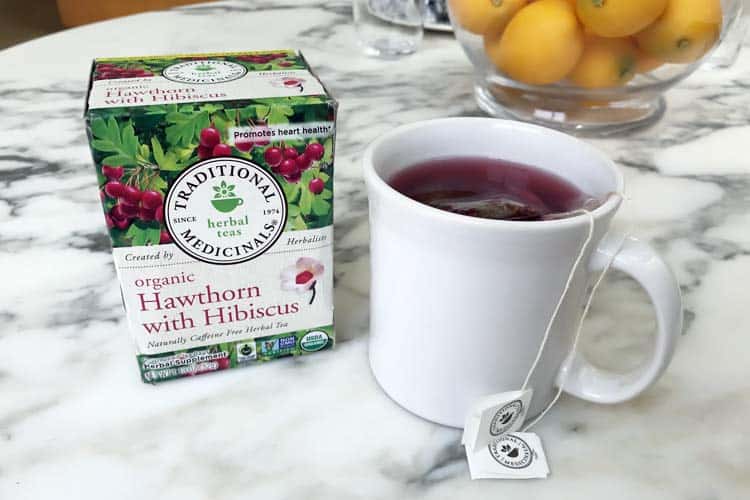 Our favorite is this one by Traditional Medicinals. It’s made with a blend of organic hawthorn berries, leaves, and flowers, along with high-antioxidant hibiscus. You can order it through Amazon.

Indian hawthorn (Rhaphiolepis indica) is only loosely related to the European and Chinese species. Native to temperate and tropical Asia, including China, the plant is mostly used for decoration. The pink flowers do produce a fruit that you can eat after cooking. However, the Indian species is not what people typically have in mind when mentioning the culinary and medicinal uses of hawthorn.

Even though the Crataegus monogyna is called European, it’s also native to northern Africa, western Asia, and has long been grown in the US and Canada. There are other species native to North America, however many are poisonous and the non-poisonous species have very few medical studies.

While there is compelling research on the Crataegus genus of plants, the following benefits are not classified as proven and therefore, this food/supplement is not intended to diagnose, treat, cure, or prevent any disease.

With that said, here’s what the science is showing so far…

Since at least the 1800’s, species of hawthorn found in North America have been used for hypertension, congestive heart failure, arrhythmia, and other heart problems. These primitive herbal remedies were used by Native Americans as well as regular citizens. (2)

Despite the long history, it wasn’t until this century when human clinical trials for hypertension took place.

The first was a pilot study done by The University of Reading (UK). A direct quote from that (3):

“…showed a promising reduction (p = 0.081) in the resting diastolic blood pressure at week 10 in the 19 subjects who were assigned to the hawthorn extract, compared with the other groups.”

Out of Germany, several studies have reported benefits for blood pressure, however they involved a combination of hawthorn berry extract and natural camphor, which is a waxy terpenoid derived from an evergreen tree.

This combo was used to increase blood pressure in cases of hypotension, such as in elderly patients and those with postural orthostatic tachycardia syndrome (POTS). That’s the lightheaded feeling some people get when standing up, due to reduced blood flow. (4) (5) (6) (7) (8) (9) 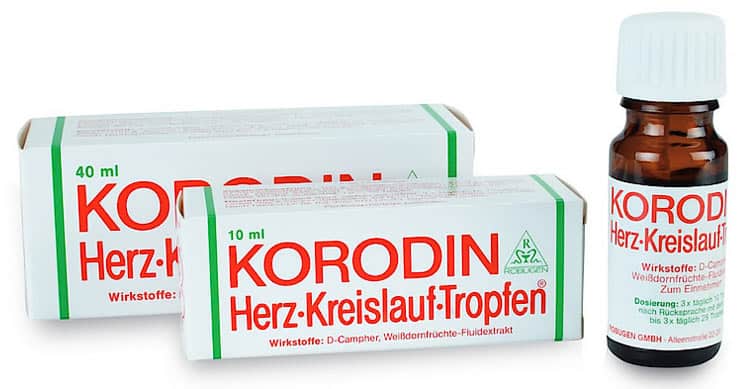 In Germany, that combo is sold under the brandname Korodin Herz Kreislauf Tropfen. The manufacturer’s listed dosage is to take 10-25 drops 3x daily, after consulting a doctor.

So when camphor isn’t included, then what effect does hawthorn have on blood pressure?

The University of North Carolina conducted a randomized and placebo-controlled trial involving 21 patients who had prehypertension.

With hawthorn dosages ranging from 1,000 to 2,500 mg, taken twice daily, they found “no evidence of a dose-response effect.” They said if it does work for lowering blood pressure, it’s probably unrelated to nitric oxide-mediated vasodilation. That’s one of the most common causes of high blood pressure. (10) (11)

Studies in support of it working include a more recent one out of The University of Reading: 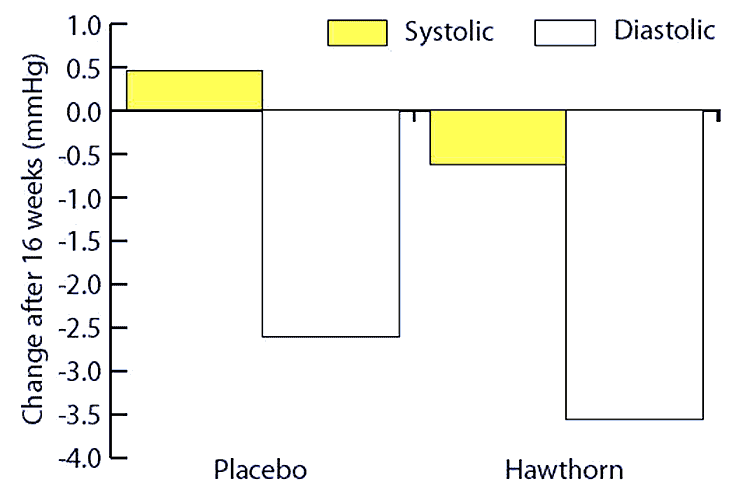 While not the berry, an Iranian hospital reported success using extracts of hawthorn flower. The species was Crataegus curvisepala, which grows local there. (13)

2. May be useful in congestive heart failure

Not all, but a number of “rigorous” clinical trials have reported hawthorn benefits for “objective signs and subjective symptoms” related to congestive heart failure for stage 2 patients (NYHA-II). (14)

The Swiss did a study with 143 patients over 8 weeks using fresh hawthorn berries. They reported a significant advantage when it came to exercise tolerance, due to less fatigue as measured during bicycle tests. (15)

The largest human clinical trial was called the SPICE study. Organized by German researchers, it was an immense undertaking that began in the late 90’s and continued through the 00’s.

For those taking the hawthorn extract supplement, the average time to the first cardiac event was 620 days. This wasn’t much better than placebo at 606 days. Nor were mortality rates much different after 24 months. However, the subgroup with LVEF had a 39.7% reduction in sudden cardiac death when compared to placebo after 24 months. 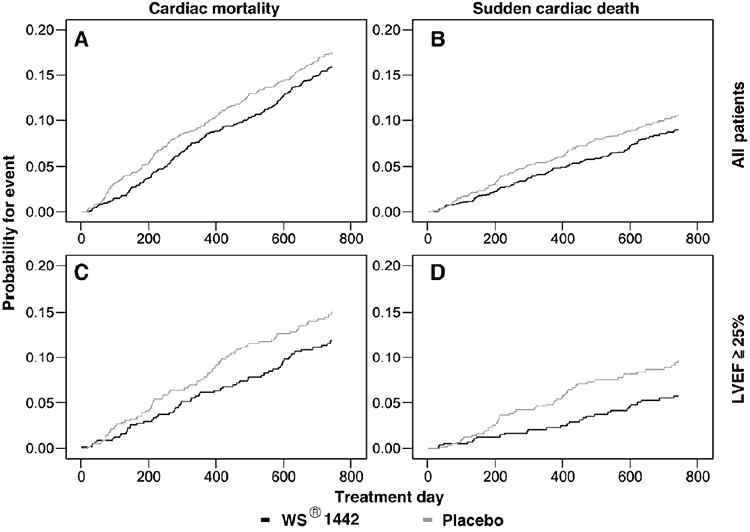 So this study didn’t lend support for CHF in general, but it was compelling specific to those with LVEF. (16)

In 2009, a year after those results were published, the University of Michigan did their own version, even with a knockoff name of the HERB trial instead of SPICE.

With that one, only 120 patients participated and it was shorter term, at 6 months. Their conclusion stated “hawthorn provides no symptomatic or functional benefit” when given to heart failure patients. So you have studies both for and against it. (17)

While its use for this purpose has a long history in traditional medicine, modern science hasn’t done much human research. Most involves animals.

Around a decade ago, Russian scientists did do a clinical study and reported improvement in the cardiac rhythm of chronic heart failure patients. (18) 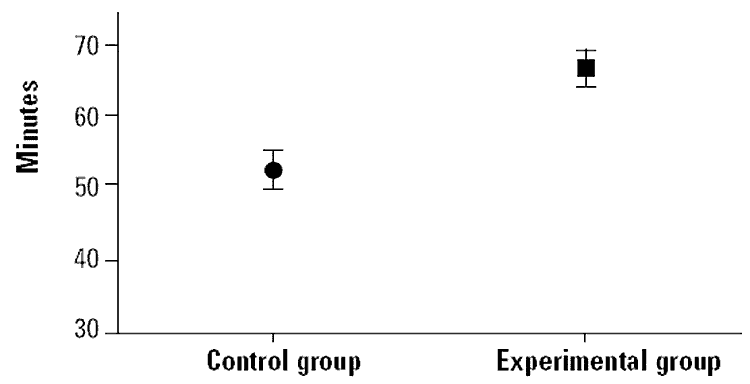 They reported favorable responses, such as the above chart which shows how the rats given the hawthorn fruit extract survived longer. (23)

Using cultured human cardiac cells, in 2018 a group of researchers reported what they believe to be the mechanism of action in the plant; isoquercetin and vitexin flavonoids. These were isolated from Crataegus pentagyna leaves and found to have a dose-dependent effect on the beating frequency and consistency of the cultured heart cells. (24)

While several rodent models have reported that hawthorn lowers cholesterol, only one human clinical trial has taken place.

The Department of Cardiology at a Spanish university conducted a double-blind placebo-controlled trial:

As you can see, their bad cholesterol went down while their good cholesterol stayed the same. Triglycerides remained roughly the same.

These beneficial outcomes for cholesterol weren’t seen in the placebo group and in fact, some parameters worsened for them. (25)

As part of the French herbal formula Euphytose, in the 90’s there was a double-blinded and placebo-controlled trial with 91 patients. It reported statistically significant differences in anxiety when compared to placebo.

That supplement also included valerian, passion flower, and ballota, all of which are known to have sedative effects. That means you can’t read too much into this study, since you don’t know what the active (or most active) ingredients were. (26)

That said, there is evidence to suggest it may help.

There have been “significant and dose-dependent” responses in animal models using hawthorn berry. They have been described as “opioid-related analgesic activities” and conclude (27):

“These findings seem to support the traditional use of this plant to treat stress, nervousness, sleep disorders, and pain control.”

A medical university did a study where they had 5 healthy volunteers consume 500 mg of hawthorn berry powder. Next, their blood samples were taken 1, 2, and 3 hours after ingestion.

When those living blood cells were exposed to radiation, there was a 44% less damage on the samples taken 1 hour after consuming hawthorn. (28)

ORAC values of fresh or dried hawthorn berries, flowers, teas, and other extract have not been reported. Similar methodologies of measuring antioxidant activity, like DPPH, report that most parts of the plant exhibit potent free radical scavenging activity. (29)

Isolated procyanidins from the fruit have demonstrated better scavenging ability than vitamin C and vitamin E in lab tests. (30)

Does hawthorn make you lose weight?

Along with lotus leaf, cassia seeds, and Solomon’s-seal, Chinese hawthorn berry is one of the most frequently recommended herbs for weight loss in Traditional Chinese Medicine. Anywhere from 200 mg to 3g daily of Crataegus pinnatifida is the typical recommended dosage. They believe it stimulates digestion and ramps up metabolism, by supporting the heart and cardiovascular system.

Despite what TCM and diet pills may purport, there is limited scientific evidence of the plant helping to battle that belly fat.

However, there are reasons to believe it may be useful…

South Korean scientists report “antiobesity effects” based on tests using cultured cells and rodents. They say extracts improve the metabolism of lipids (fats) in the liver and adipose tissue, and “may potentially reduce lipid storage.”

Side effects of hawthorn

The common hawthorn (C. monogyna) and Chinese (C. pinnatifida) are the two most common species used for food and herbal medicinal practices. In human trials, both have been well-tolerated with side effect profiles comparable to placebo.

The SPICE trial involved 2,681 patients and is the largest to date. The safety of hawthorn extract vs. placebo appeared similar, based on the reported adverse reactions in each group (34):

Hawthorn berry is not a blood thinner. A study published in the journal Thrombosis Research tested the micronized flowers and leaves in 16 healthy men and women. Aspirin was used as positive control to demonstrate antiplatelet activity. An 800 mg dosage taken 3x daily of hawthorn for 15 days did not demonstrate any effect on platelet aggregation. (35)

Because compounds in hawthorn plants may affect blood pressure, heart rate, lipid profile, and weight, you should not consume the berries, leaves, or flowers without first consulting a doctor if you have any disease or health condition.

The safety of hawthorn herb extract, berry, and tea during pregnancy is unknown. None have been studied in pregnant women or animal models. Breastfeeding has not been researched, either.

Even though there is no reason to believe it causes birth defects, in theory the influence it may have on the cardiovascular system could be dangerous and increase the risk of miscarriage in pregnant women with certain cardiovascular abnormalities.

There are studies suggesting that not only the berry, but also the leaf and flower, may support heart health and offer other benefits. However, there is not enough clinical data on any to (a) prove them conclusively, and (b) determine which part of the plant is best for using as a dietary supplement.

For that reason, the ideal choice may be a supplement which includes all parts of the plant. Gaia Herbs makes a product that does just that. It’s a 500 mg liquid-filled vegan capsule. They use organic hawthorn berry, leaf, and flower extracts. You can get Gaia Hawthorn Supreme on Amazon.

For those who prefer the berries or leaves to make tea or consume directly, on Amazon you can get a 1 lb bulk bag of berry powder and/or a 1 lb bag of cut and sifted leaves/flowers.