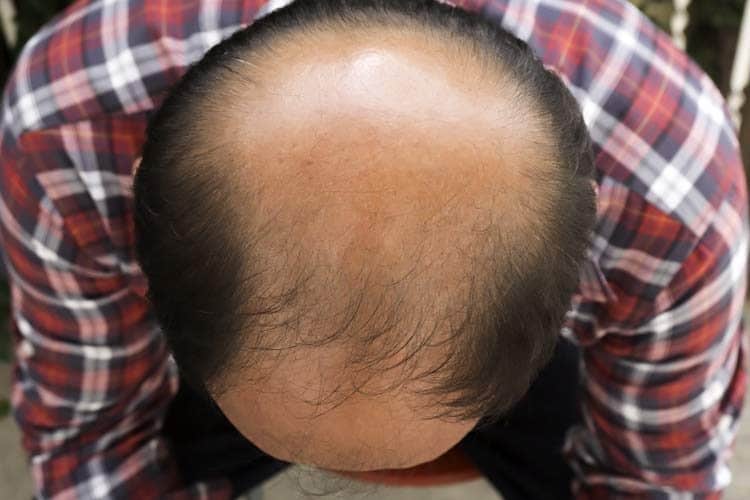 You’ve heard that it’s good for weight loss and offers antioxidants for anti-aging.

Those claims are backed by science.

The ORAC value of matcha powder can exceed 100,000. That means it has antioxidant activity which rivals acai.

Separate from its caffeine content, green tea extract has been found to boost the basal metabolic rate in humans by 4% over a 24 hour period. That’s why it’s good for dieting. Plus if you don’t add sugar, it’s a zero calorie beverage.

Now for a less obvious benefit…

While there is inadequate clinical data to prove this benefit, over two decades of published medical research (since 1995) reports that certain green tea catechins inhibit a pathway linked to male and female pattern baldness. In fact, it’s the same mechanism of action which Propecia (finasteride) uses to promote hair growth.

In 1995, scientists from the University of Chicago published data showing how two types of green tea catechins were “potent inhibitors” of 5a-Reductase type 1.

5a-reductases are enzymes involved with the metabolism of steroids.

Specifically, they convert testosterone into DHT.

Originally developed for benign prostatic hyperplasia (BPH), which is an enlarged prostate, finasteride (Proscar/Propecia) was found to help that condition by blocking the conversion of testosterone to DHT.

Later on, it was found to help with balding, too.

That’s because hair follicle cells in the scalp convert testosterone to DHT, which causes them to shrink during each growth cycle. Over time, this leads to finer and thinning hair. Eventually this leads to baldness.

5 alpha reductase inhibitor drugs and supplements can help with this, by reducing how much DHT gets produced.

The earliest published research from the 90’s cited two types of catechins in green tea:

It was these two types – EGCG and ECG – which were said to be “potent inhibitors” of 5 alpha-reductase type 1. (1)

What the clinical data says

Despite this finding being over twenty years old, very little research on EGCG and ECG has been done relating to hair.

Much of the discussion has been in relation to green tea for prostate cancer prevention, via the DHT interference. (2) (3) (4)

It wasn’t until 2017 when the first human study reviewed benefits of green tea for hair growth.

Conducted by the University of Miami, it was an open-label (non-blinded) study, which meant that the participants knew what they were getting.

Normally this would be frowned upon, but since hair follicle growth is something that can be objectively measured, it’s of less concern here.

This is how the trial worked:

The results were encouraging… 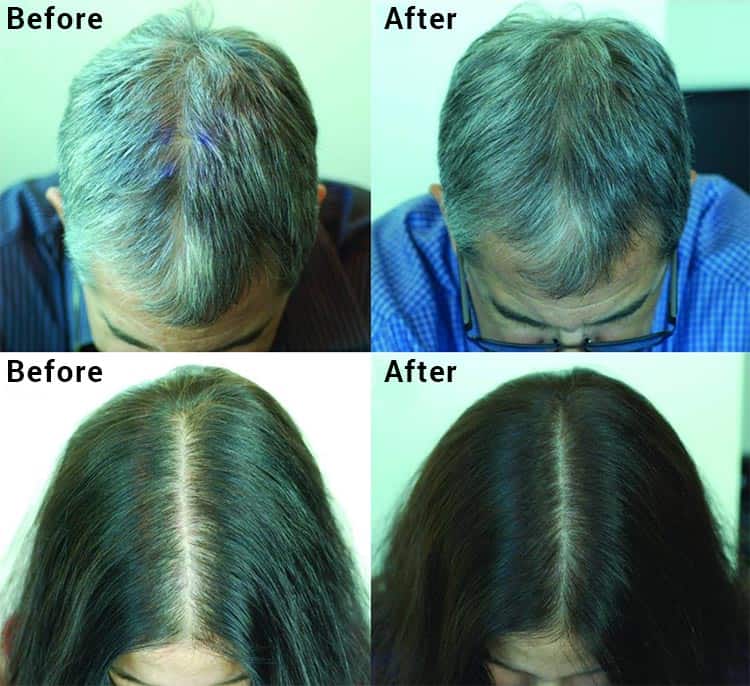 The above are examples of before and after photos, for a man and woman took the supplement for 24 weeks.

If you know statistics, you will appreciate those very low p-values. In plain English, the results were not random, as they very statistically significant.

In summary, 80% of the patients experienced hair regrowth with the green tea supplements. Most had “moderately increased” or “greatly increased” hair count and hair mass.

However, it is worth noting that 80% of these patients had no prior treatment. Only one of them had tried Rogaine (minoxidil) or Propecia (finasteride) prior to the trial. Another person had tried the B vitamin, biotin. These and other treatments weren’t allowed to be used during the trial.

It’s also important to remember that these weren’t just plain green tea capsules. Other herbal extracts were part of the formula. This makes it impossible to know how effective the supplements would have been if only the tea extract was used. (5)

Can green tea make your hair fall out?

That was actually an auto-suggest given by Google.

If anything, it does the opposite and keeps your hair in!

Joking aside, there are real safety concerns.

If you’re taking green tea supplements for hair loss, the two biggest dangers are liver damage and excess fluoride consumption. Both of those are known side effects of the Camellia sinensis plant.

Their roots have a propensity for fluoride uptake from the soil.

While liver injury has not been reported from drinking regular amounts of green tea or matcha, it has been with extract supplements. Too much can lower the liver’s ALT and AST levels, which are enzymes found mostly in the liver. (6)

Applying green tea for hair loss topically on the scalp is probably safer and potentially more effective. It could allow for a more concentrated dosage, that makes direct contact with the skin. However, no one knows if the skin absorbs EGCG and ECG sufficiently to beat capsule supplements.

Verdict: Does it make your hair grow?

Certain catechins in green tea can probably make your hair grow, or reduce hair loss, when it’s caused by female or male pattern baldness. However, the blocking of 5a reductase activity is only proven in lab research. There isn’t enough clinical data to determine whether drinking it, taking extract capsules, or using topical green tea will stimulate this same activity in the scalp. Potency of dosage, bioavailability, and absorption (if applied to skin) would all factor into whether or not it works for hair regrowth.

The good news is that there’s zero evidence to suggest it makes your hair fall out, or that it turns your hair grey. So if you’re using supplements safely according to a label’s recommended dosage instructions, you have little to lose.

How long does it take for green tea to reduce hair loss? If it’s going to work, 6 months is probably sufficient time to determine That’s how long they took it in the Forti5 study. If hair regrowth isn’t seen by then, it probably isn’t going to help.

Speaking of the Forti5 supplement used in that trial, you can buy it on Amazon.