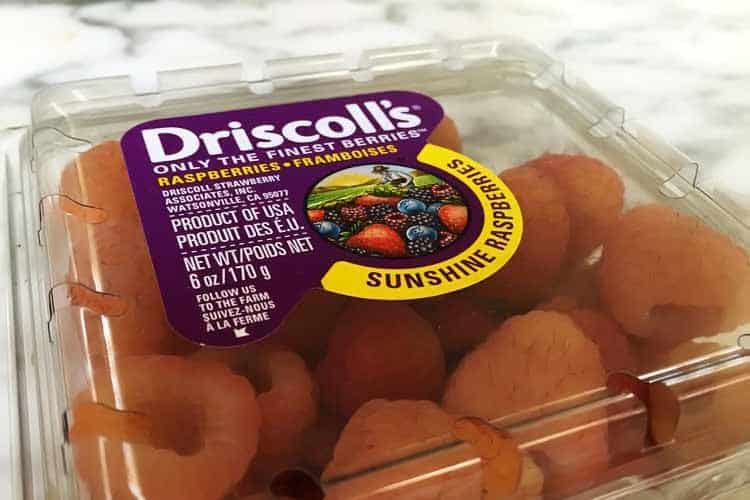 Golden Yellow Raspberries Nutrition, Taste, and Where To Buy

Unlike blue strawberries which are totally fake, you really can buy Fall Gold raspberries. That’s what the common yellow cultivator is called when sold as seeds.

When you buy them fresh at the grocery store, you’re probably getting what looks like the Double Gold variety. Driscoll’s markets them under the name Sunshine, which is their trademarked term. It’s actually more of an orange raspberry – a deeply blushed, champagne color.

Want to grow your own? You can buy the seeds on Amazon.

Sunshine raspberries taste sweeter than red and are less tart. Some have described their flavor as being floral. Fall Gold and other yellow raspberries have a taste which is similar to golden/Sunshine, but arguably even sweeter. 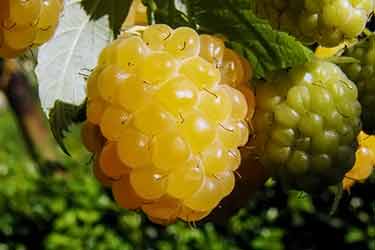 It’s not that they have more sugar, but rather it’s that you don’t have the tart flavor detracting from it.

With either variety, their rich sweetness combined with a mellow taste means they won’t overpower other foods you pair them with, as red raspberries often can do.

For that reason, they work better in dessert recipes with a vanilla base. Yogurt, ricotta, and cottage cheese have the opportunity to shine, without their flavor being choked out.

It’s sad we live in a world where any unusual fruit or vegetable triggers the question… is it GMO?

The good news is that the gold raspberry is all-natural. 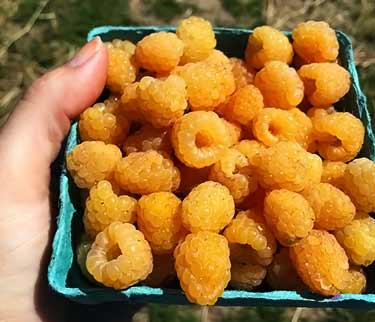 While it may seem new, the fact is that this rare genetic abnormality is naturally occurring, and most likely has been throughout the entire history of the fruit. It’s only in very recent history that we have been cultivating it for food.

Believe it or not, the yellow actually comes from the exactly same species as the American red raspberry (Rubus strigosus). So how did it end up as a different color?

Humans and animals can be albino, as well as fruit!

In animals, albinism is caused by a recessive gene which results in no melanin production, or a greatly reduced amount of it.

Raspberries don’t have melanin, but they do have anthocyanin. Those are a category of pigments which produce the reds, blues, and purples in fruits. The exact color and shade which occurs will depend largely upon the pH of the plant.

When the flower of such a plant is pollinated with the same type, the seeds it produces will create yellow raspberries. Those which look orange or champagne don’t have all of their anthocyanin production blocked like the yellow, but most of it is impaired.

Nope. Their Sunshine variety was naturally created using selective breeding of plants. That golden color with a hint of pink is because some anthocyanin is still produced by the berry.

Not only is their Sunshine all natural, but so is their red raspberry. In fact, all of Driscoll’s strawberries, blueberries, and blackberries are non GMO, too. It says it right on their website along with this statement:

“Driscoll’s Research and Development department is the industry leader in the development of premium berry plants that utilize only proven natural and traditional breeding process to create our superior berries.”

Driscoll’s Sunshine raspberries are only grown in one region; Watsonville, California. Their website lists the growing season as being from April through December. Since they’re only sold fresh (not frozen), if you find them for sale it will only be during those months.

Depending on your location, you might be able to buy them at Trader Joe’s or Whole Foods. In Southern California, a number of locations sporadically carry Sunshine (but never the yellow) in late summer and early fall. 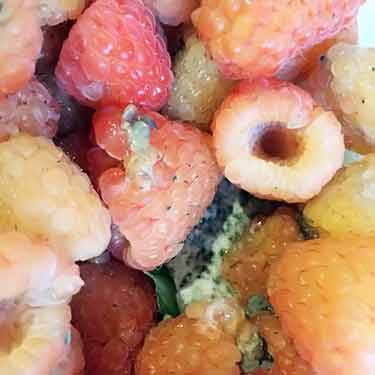 Wherever you buy them, inspect the package carefully because they seem to be even more perishable than the red.

The photo you see here is from a 6 ounce clamshell purchased at Trader Joe’s in Manhattan Beach (Los Angeles). Not just one, but both of clamshells purchased contained disgusting mold. That didn’t grow later, but rather it was discovered the very same day when they were opened at home.

At the Whole Foods in El Segundo, whenever they have them in stock, you often have to sort through several packages to find one that’s not moldy. That being said, their quality control for all produce is rather disastrous at that location.

How much do golden or yellow raspberries cost? The Driscoll’s Sunshine tend to run more than their red. Sometimes, the price is up to 70% higher.

At Trader Joe’s, the price was more reasonable at $2.99 for Sunshine… which was actually the same cost as red. 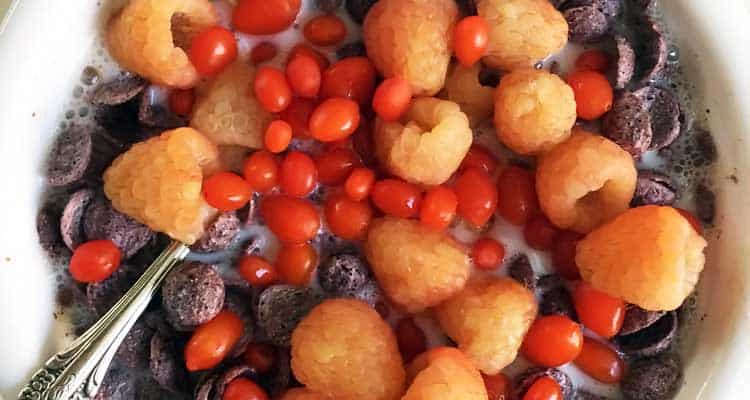 That’s a bowl of sunshine made with these delicious organic purple corn flakes.

For the pure yellow (i.e. gold), since we never see them for sale in Southern California, we can’t comment on their cost. Though it would be expected that Driscoll’s gold raspberries would be priced the same as Sunshine.

Outside of specialty grocers, finding either of these specialty berries for sale can seem like a needle in a haystack.

You might be able to find them at a farmers market, but even then, don’t get your hopes up. Do research ahead of time in your area, before going on a wild goose chase. Because chances are, a farmers market within 50 miles of you probably doesn’t even have them.

If you want organic yellow, then buying them direct from local growers – like those at a farmer’s market – will be your only option. If you want USDA certified organic, probably no one sells those. Driscoll’s are not organic.

Both the yellow and red can be a deceptive fruit… in a good way!

Despite the intense sweet flavor, their calorie count per serving is quite low relative to many tropical fruits. The red, yellow, and orange types all have the same nutritional values or close to it.

Since they both contain the same amount of calories, carbs, vitamins and minerals, turning to the nutrition facts label won’t be very helpful in answering that question.

That means the answer comes down to the off-label information. The phytonutrients.

Remember that part about the reduced or missing anthocyanin content?

Well, that’s also where a fair amount of the fruit’s antioxidants come from!

Sure, you still have the antioxidant vitamin C, since that is something different. But as far as the phytonutrients coming from anthocyanin, the gold will be lower.

Conducted by Italian researchers, an excellent study was published in 2013 which analyzed some of the main types of antioxidants found in different yellow and red varieties (1). 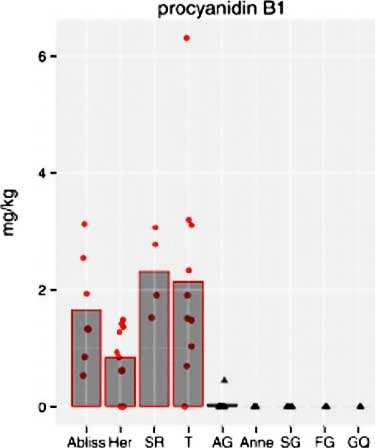 The 4 red bars represent the red raspberry varieties. As you see, only they contain the antioxidant procyandin B1. 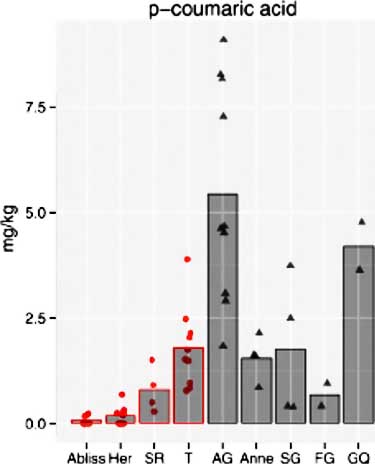 Represented by the black bars, the yellow varieties tend to have more of the antioxidant coumaric.

Both are good for you, but there’s not enough research to know which is healthiest.

Since different types of antioxidants have different levels of activity, you really need to measure them cumulatively, not separately. ORAC values are the best method for measuring total antioxidant activity in a food.

The ORAC value for golden or yellow raspberry has not yet been measured. That’s not really surprising, considering how expensive and complex the testing can be.

Often times when the anthocyanin is removed, a fruit will test lower. But there are exceptions to that rule. Especially when the lighter version happens to be gold colored instead of white.

The ORAC for red raspberry comes in at 5,065, which is actually higher than blueberries at 4,669.

While both of those berries are rich sources of antioxidants relative to most fruits and vegetables, there are other superfoods which have concentrations up to 60 times higher. To see, check out our ORAC values chart.

Where to buy plants and seeds

It’s extremely hard to find yellow raspberry plants for sale at your local nursery. Some very niche specialty nurseries might have them on occasion or available for special order. If you know of one, please share in the comments below!

Mostly likely, you will have to start with seeds. Those are easy to get, as you can buy them online. You can also get live seedling plants online, too.

So what’s the best yellow raspberry to grow in your garden? Each cultivar will have its pros and cons depending on your USDA hardiness zone, your growing season, and the color your desire. None will taste like red, so they are similar in that regard. 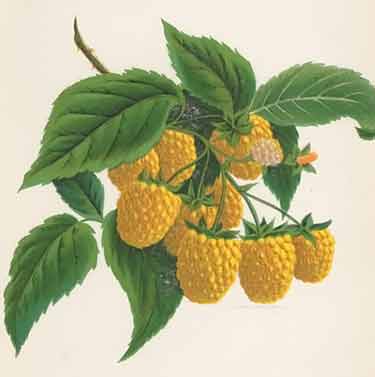 Golden Queen – This is believed to be the very first yellow raspberry cultivar, or at least as documented in modern human history. The Golden Queen was found growing in Camden County, New Jersey on grounds owned by a man named Ezra Stokes. The precise year is not clear, but artwork of this golden raspberry was produced ca. 1880, as seen in the original chromolithograph pictured here.

Anne – With large fruit the size of a quarter, this is a popular choice. It’s not known for being heat tolerant, as it can make the flavor more tart.

Cascade Gold – This is the yellow version of the popular red raspberry known as Cascade Delight.

Double Gold – Sold by Burpee, it produces two harvests in one season and hence, its name.

Fall Gold – Your classic yellow raspberry. A common variety but like Anne, it is said to be quite susceptible to sunburn.

Fertödi Aranyfürt – An Autumn fruiting cultivar which is not commonly sold. If you have a review, please share below.

Goldenwest – One of the older cultivars, as documented in a 1953 book published by the Institute of Agricultural Sciences at State College of Washington (2).

Honey Queen – A modern creation by Robert Erskin of Alberta Canada, this variety is said to tolerate hot weather better than Anne and produce larger berries than Fall Gold.

Kiwi Gold – Developed in New Zealand and sold worldwide, but seeds can be hard to find for sale in the US. Its popularity seems to have faded within the last decade.