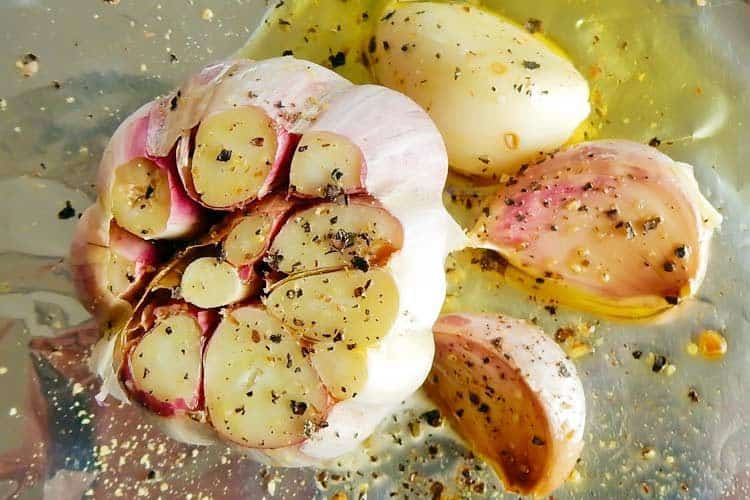 With many home remedies, the worst thing that happens is that they simply don’t work.

With some, much worse can happen. They can actually be dangerous and hurt you.

When it comes to ears, the stakes are even higher. Something you eat or drink may give you a stomach ache. Not the end of the world.

Something you put in your ear may have the ability to cause permanent hearing loss!

Ear candles, used for cleaning wax, is one such example.

Even when used according to the instructions, they can cause “serious injuries” such as burns to the middle ear and even puncture the eardrum. (1)

To add insult to injury, science has not found them to be effective. In fact, removal of too much wax is bad for you. It’s a coating that naturally belongs there. You don’t want to strip it all away. (2)

Perhaps the second most popular remedy involving this body part is the use of olive oil and garlic to allegedly cure an infection. Some newer variations make use of coconut oil instead, because after all, that is the latest dietary trend.

It sounds like another hoax or scam. Then you come across the research and discover there might actually be something to it. But not with the method that most people use.

How to make garlic oil

To be clear, these instructions should not be misconstrued as being an endorsement or recommendation for use. Garlic and oil is NOT intended to diagnose, treat, cure, or prevent any disease.

The purpose of this information is so you can understand what we are referencing when we talk about people who prepare and use homemade garlic oil for their ear infections. Recipes vary, however this is the typical mixture for making drops.

The filtered oil is what’s used. The garlic itself is not fully cooked. It’s merely warmed enough for the compounds to be released from the raw clove.

High heat on olive or coconut oil is bad, because it creates advanced glycation end products and that’s another reason why very low heat is used. On a gas burner, this whole process may take just 5-7 minutes.

There is an alternate way to make a raw version. The garlic is finely minced and then added to the oil, which is stored in a small closed container overnight in the fridge.

If you were to eat either version of the spiced oil, it will clock in at 240 calories for a 2 tbsp serving. That comes from the 28g of fat, 3.8 of which is saturated. Using coconut oil will be comparable.

Instructions of using warm garlic oil for an ear infection involve a dropper. The mixture is first allowed to cool so it will not burn, which means it’s same or lower than body temperature (98°F). The dropper is used to administer 1-2 drops into the outer ear. 10 or 20 seconds after doing so, the head is turned sideways so any excess oil can drain out.

How it can be dangerous 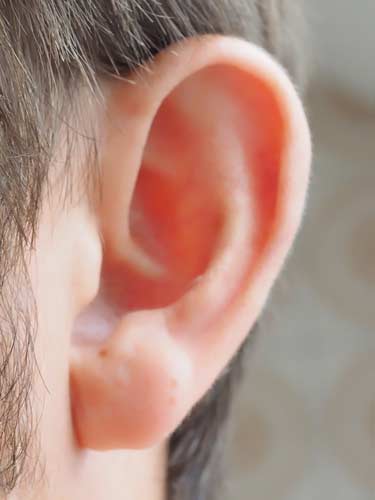 This remedy is potentially unsafe for adults and definitely dangerous for babies and toddlers.

Some children may not even have an ear infection and instead, their earache may be due to excess fluid buildup. That is why young kids get surgery for ear tubes. Only a medical doctor (i.e. pediatrician) can diagnose this condition. (3)

Adding any type of ear drop – even those which are over-the-counter and formulated for pain relief – can actually make a child’s ear worse and cause complications. With the exception of medical treatments prescribed by their doctor, never put anything into the ear canal of a baby, toddler, or child.

Even if you are a grown adult, these garlic infused drops can pose a risk.

Contrary to popular belief, the antimicrobial properties of garlic are unproven (more on that in a minute). When remedies such as this are used, the underlying infection can worsen in the process of delayed medical treatment, which only amplifies the problem.

Furthermore, the introduction of the mixture may actually introduce new bacteria that could cause another type of infection in the ear canal.

There is the risk of burns from heat if the mixture has not cooled thoroughly, as well as chemical burns from the garlic’s volatile oils (essential oils) and its allicin content. The latter is created by an enzymatic reaction when the clove is cut or crushed.

Infections aside, using the oil, pills, and a garlic clove in the ear for tinnitus is touted by some, but these remedies for ringing in the ears may just be an old wives’ tale.

If you’re pregnant, the safety of using the oil is unknown. Garlic is one of the supplements to avoid before surgery and giving birth because it can increase bleeding. Of course, putting a few drops in your ear is quite different than taking concentrated capsules or pills of the powder, though its safety is still unknown. when pregnant and breastfeeding.

What the science says

Because there is a longstanding – albeit unproven – tradition of eating raw garlic for treating a cold or flu, a number of studies have been published on the antibacterial and antiviral activities of this herb. 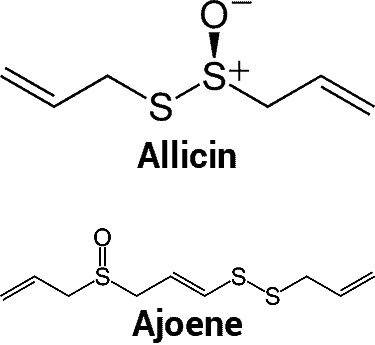 In vitro (lab) tests have analyzed garlic extract against strains of Staphylococcus aureus and Eschericha coli. It did show some inhibition against the growth of these bacteria, though it was “not potent like antibiotic Imipenem” that it was compared against. (4)

For viruses, there have only been a couple lab studies.

Garlic was found to have anti-viral effects against an infectious bronchitis virus (IBV) in chicken embryos and the cytomegalovirus (CMV). No tests on viral infections in humans have taken place. (5) (6)

There is some very preliminary lab research which shows it might be good for the flu virus (H1N1). The compounds allicin and ajoene were observed blocking a step in the viral replication known as docking. How this worked was by inhibiting a protein called neuraminidase in the virus. (7)

In short, it’s unknown if garlic has antibacterial and antiviral activity in the human body, especially after digestion. Even if it does, the effect of the garlic was “weak” in lab tests. 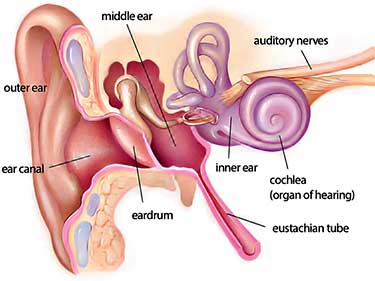 If a conclusion had to be drawn based off the lab research, one would have to say the evidence for this remedy is very weak and it’s unlikely to work.

However it turns out there has been human clinical research on the use of garlic extract for ear infections. Not for those caused by bacteria or viruses, but rather fungal infections which take place in the outer ear canal (otomycosis).

In 1993 a university in India conducted lab tests on 5 pathogenic fungi strains which were isolated from actual human ear infections:

When these were mixed with mustard oil and garlic bulbs, they said growth was “completely inhibited.” On a somewhat related note, coconut oil mixed with ajwoin seeds were said to be less effective. (9)

In 1995, the University of New Mexico did similar experiments using aqueous (water-based) garlic extract and concentrated garlic oil. They reported:

They tested against the fungi genus Aspergillus, which they say is “the most common cause of this infection [otomycosis]”. (10) 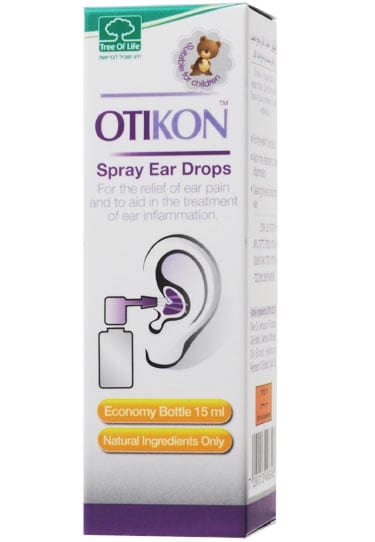 In 2001, a human clinical trial was conducted in Israel and the results were published in the prestigious JAMA Pediatrics journal. (11)

Here’s how the trial worked:

Here is a breakdown of how many boys and girls were in each treatment group:

Here is how their pain scores compared during treatment. The lower the bar, the less pain there was. 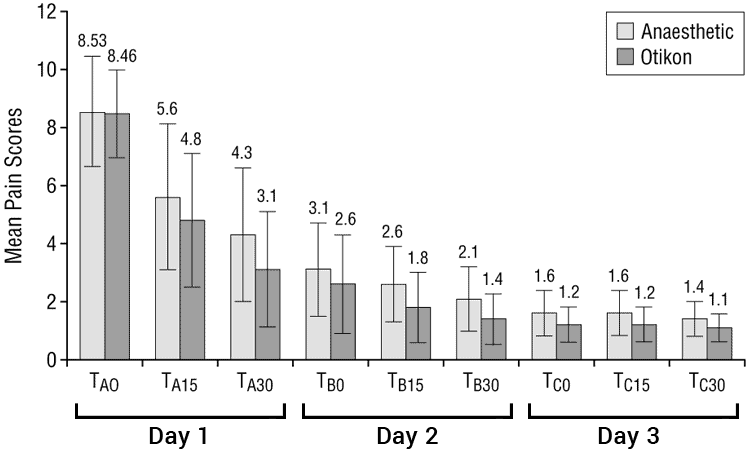 As you see, the Otikon group actually had lower pain scores along all increments measured.

While this research does lend credence to using garlic oil for ear pain and infections, some important things to keep in mind are:

Around this same time, an editorial piece was penned by a doctor out of Boston Medical Center on the problem of antibiotic resistance when it comes to acute otitis media (AOM). In regards to herbal remedies being used, he said:

“Finally, alternative medicine remedies may be of value for some infectious diseases including AOM; garlic extract is bactericidal for the major bacterial pathogens of AOM but is heat- and acid-labile and loose activity when cooked or taken by mouth.”

It’s not clear what compounds he’s referencing but most likely it’s the allicin.

Allicin is only temporarily present in garlic. It’s created when the cloves are crushed, through a chemical reaction that takes place. It only lasts for minutes (not hours) and heat will instantly destroy it. If allicin can help with ear infections, the evidence suggests that the common recipe of heating garlic with oil would be ineffective because the allicin content would be largely or entirely degraded.

When it comes to colds and congested sinuses, the allicin, S-Ally cysteine, and ajoene in garlic are believed to help primarily through their anti-inflammatory action and effects at clearing the congested mucus in the nose. Perhaps one or more of these compounds is why people claim to experience relief with garlic oil – because it may be reducing inflammation and helping to clear out fluids.

Using garlic and olive oil is an unproven remedy for earaches and infections. There is preliminary lab research and human clinical data to suggest it might work for fungal infections and offer temporary benefits for pain reduction. Garlic oil for tinnitus has no scientific evidence.

What can be confidently said is that garlic oil pills are unlikely to work. The compounds in garlic that have potential analgesic and antifungal benefits are created shortly after crushing a clove. These would be destroyed by the time they’re digested and even if they were present, their concentration would be far too trivial to work ubiquitously throughout the body. 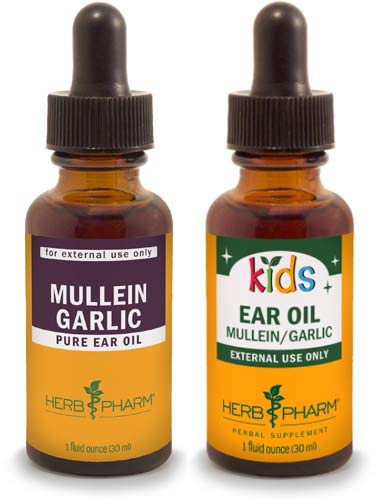 The garlic-based Otikon drops used in the human study are sold in Israel. The company also has a website marketing them in South Africa and at least one third-party retailer sells them in South Korea and Greece. We are unaware of Otikon for sale in the US, Canada, or most European countries, such as the UK and France.

When it comes to other brands of garlic ear oil, you can’t just stroll into a store like Walmart, Walgreens or CVS and pick up a bottle. They are very niche products that you can only buy at specialty vitamin and health stores and even those places are a gamble.

The brand Herb Pharm sells ear drops which share many of the same ingredients as Otikon. Their label says it’s a base of organic olive oil with garlic bulb, mullein flower, calendula flower, and St. John’s Wort extracts added. You can buy it in a 1 oz dropper on Amazon.

Please note it’s only for external use of the ear and consulting your medical doctor beforehand is advised. Whether it’s Otikon, Herb Pharm, or another type, the efficacy of these for ear problems is unknown.

These statements have not been evaluated by the Food and Drug Administration. This product is not intended to diagnose, treat, cure, or prevent any disease.
457
SHARES
FacebookTwitter