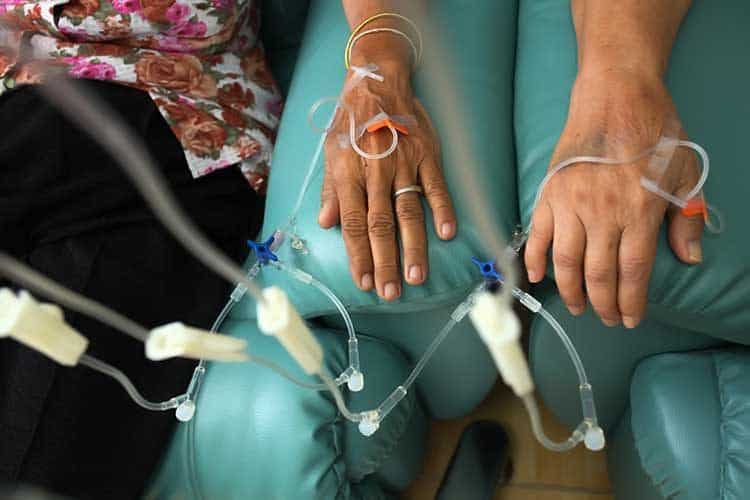 The Truth About Frankincense and Cancer Research

A popular website about purported natural treatments for cancer has an article which alleges the following:

“Discover the amazing cancer-fighting benefits of this ancient essential oil prized for its healing powers.”

The above claim is not only wrong, but it would be dangerous advice to follow in lieu of recognized medical treatments.

Also known as olibanum, it is true that this gum resin which comes from the Boswellia genus of trees is being studied for possible anti-tumor properties. However, there are a lot of myths and exaggerations circulating online about it.

Despite what you may have read on some of the herbal remedy and alternative medicine blogs, the scientific evidence suggesting that frankincense is good for cancer is actually quite limited and isolated to just laboratory research.

Furthermore, the bulk of the promising, albeit preliminary, research involves compounds which aren’t even found in the essential oil. That makes some of this hype about frankincense oil for cancer even more bogus.

If you search for topics related to cancer treatment with frankincense on PubMed, you only get 127 results that contain the words. Not all mentions are even relevant.

If you refine those results for the clinical trials, you get only 10.

Most of them are unrelated to using it as a treatment.

For example, there’s a clinical trial about the benefits of anti-anxiety “aroma hand massage on pain” in terminal cancer patients, using the gum or olibanum for its aromatic properties (1).

The most recent human study, from 2019, used a combination of ingredients and evaluated them in reducing the size of benign thyroid nodules. Even if it worked, which ingredient was responsible? (17)

Likewise for the alpha lipoic and bromelain dietary supplement study from 2017. They were studying it for chemotherapy-induced peripheral neuropathy management. (18)

There was another study from 2019 that did use boswellic acids without other ingredients. However, it was studying the side effect of cerebral edema in brain cancer patients (glioblastoma multiforme). (19)

Rather than treating the side effects of cancer, when it comes to those which are actually about preventing or treating tumors with frankincense, at best there are just 2 and they’re only loosely related. 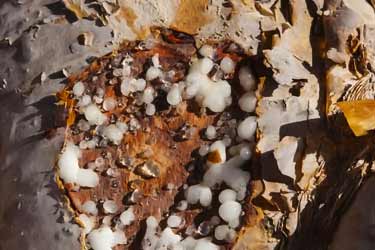 Published in 2015 and conducted at a University in Italy, researchers wanted to see if various compounds might reduce breast density. While the cause is unclear, when women have a higher density, they are considered to be at increased risk for breast cancer (2).

After 6 months of treatment, both groups experienced a reduction in breast density, but the effect was much more dramatic in the experimental group.

Some natural remedy websites have called this a frankincense breast cancer research study, but such a label is inaccurate.

For starters, none of these people had any tumors to begin with! What they had was a risk factor for breast cancer.

Secondly, while the frankincense extract was a main ingredient, it wasn’t the only ingredient. If the apparent benefit came from the experimental group’s supplement, it’s unknown what degree each ingredient had on the outcome.

If you look outside of this human clinical trial, there is a fair amount of intriguing research being done involving breast cancer cells and others types in the laboratory. But nothing involving humans and very few even involve rodents. Most involve nothing more than cultured cells in Petri dishes.

Same university and same group of researchers. They wanted to see if usage of Boswellia would reduce the growth of fibroadenoma, which accounts for the majority of benign breast lumps.

Here were the results before and after 6 months of usage:

The treatment group had a greater improvement (mass reduction) in their existing fibroadenomas than the placebo group. While these results might suggest preventive benefits for breast lumps, it’s impossible to tell since other vitamins and phytonutrients were also included in the formula. (3)

Anti-tumor activity in the laboratory

“Boswellic acids appear to be promising candidates for anticancer drug development in future. However, further in vivo [in human] studies are needed. Studies in combination with clinically used anticancer drugs and QSAR [Quantitative Structure Activity Relationship] studies on individual boswellic acid also need to be carried out.”

Published that same year was a paper by Italian researchers, who claimed some of the “the most interesting targets” in frankincense resin possibly related to the disease involved the following proteins; proteasome, 14-3-3, and some types of ribosomal (5).

In 2016, a case study was published about a single patient. A 52 year old Hispanic male had been diagnosed with a invasive high grade urothlial cell carcinoma (UCC) (6).

The standard treatment would be a radical cystoprostatectomy (bladder removal) followed by chemotherapy treatment. 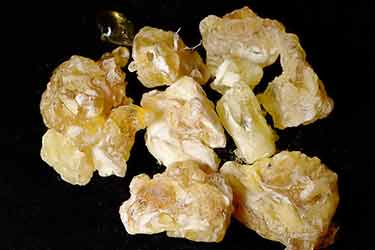 This patient instead decided to undergo just surgical removal of the tumor using a TURBT procedure (Transurethral Resection of Bladder Tumor).

After that, he chose to use Boswellia sacra gum resin at a dosage of 3 mL daily and continued his use of it for 25 months. His decision to use this olibanum was apparently his own regimen, along with dietary changes, exercise, and religious practice.

During the first year, he had two recurrences of smaller tumors, which he also had removed by TURBT.

Fourteen months after that, which was 25 months from beginning of treatment, he had no detectable tumors.

While the case study is interesting to read, no conclusions can be drawn by one person doing this (7).

Furthermore, the authors of the case study pointed out that the gum he used contained very little boswellic acid. So if there was any anti-cancer benefits coming from the gum, it likely would have been from some other component.

Prior to that – in 2014 and 2009 – are a couple papers which looked at in vitro (lab experiments) using frankincense essential oil on bladder cancer cells.

In the 2014 study using the J82 line of cultured cancerous bladder cells, the oil was said to be toxic to them “via NRF-2-mediated oxidative stress” (8).

In the 2009 study, the same J82 cell line was used and it was concluded the “oil appears to distinguish cancerous from normal bladder cells and suppress cancer cell viability” (9).

They said it appeared to inhibit proliferation of the four cancer cell lines tested in their lab, with the higher dosages appearing to work better.

In the 5 week portion of the study involving mice, they found it was less effective against metastasis by itself. Within the different groups of mice, some were given the boswellic acid while others were given gemcitabine (sold under the brand Gemzar) which is a prescription anti-cancer medicine. 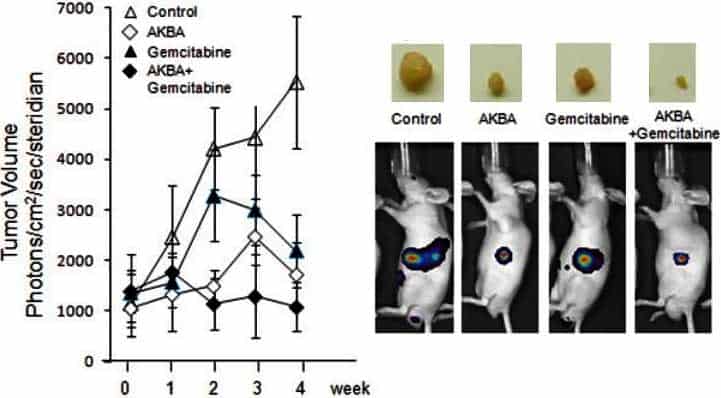 The best results were seen in the group of mice receiving both the prescription drug and the boswellic acid compound.

Earlier research suggested that this effect might be due to downregulating CXCR4 expression in pancreatic cancer cells (11).

Going back to the breast, research published in 2015 also theorized that the CXCR4 signaling pathway might help in the prevention and treatment of breast cancer (12).

It was said to be the reason why compounds in frankincense might be a candidate for future drug development. Acetyl-11-keto-b-boswellic acid was specifically called out among the plant compounds for altering this pathway. 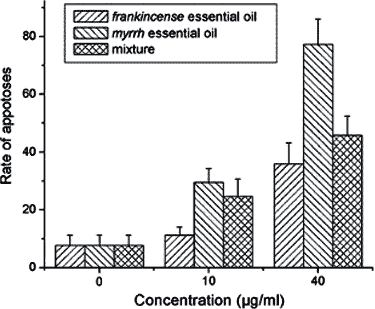 In 2013, Chinese researchers looked at the effects of essential oils from frankincense and myrrh against the MCF-7 cell line in the lab.

The myrrh oil was said to perform better, as judged by the apoptosis rate (see chart). That doesn’t necessarily go against the other research, given that the essential oil contains almost no boswellic acid (13).

Researchers in Iran propose the P53 gene as playing a role (14). They had looked at the gum extract from a different variety of frankincense; Boswellia thurifera.

Boswellic acids have also been studied in the lab using colorectal tumor cells.

“These results suggest that not only boswellic acid might be a promising epigenetic modulator in the chemoprevention and treatment of CRC [colorectal cancer], but also provide a rationale for future investigations on the usefulness of such botanicals for epigenetic therapy in other human malignancies.”

Research has proposed that there might be antitumor effects “by modulating expression of the let-7 and miR-200 microRNA family” (16). The gum extract studied came from the Boswellia serrata variety of frankincense. 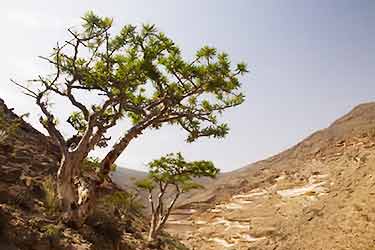 In short, the research is just far too preliminary to get excited about olibanum for cancer.

This is a very complicated diseased and in fact, it is many different diseases. The treatment for lung cancer is far different than leukemia or skin cancer, etc. There are many things have been shown to be toxic to tumors in a Petri dish, but don’t work the same way in the human body.

Think about it… you can put a tumor in a Petri dish and most likely, you will be able to find many things in your house which destroys them. Harsh cleaning supplies are one thing that comes to mind. However, that does NOT mean that those cleaning supplies would be a treatment for cancer when it’s in the human body.

It’s unknown either way, but even if there weren’t side effects of frankincense oil and gum, the dosages used in a Petri dish study are probably much higher than what a person might be consuming for therapeutic uses.

Even at a high dosage, your body breaks down many ingested compounds before they ever touch your bloodstream. This is why avocados are toxic to human blood cells in a Petri dish, but after ingestion they are believed to be safe.

The truth is that as of today, frankincense is only a cancer cure myth. There is not yet evidence that the gum resins or the essential oil works for cancer in humans. In fact, there are dozens of other natural compounds which have similar preliminary research suggesting they might be effective, so frankincense is by no means special in that regard. At least as of today.

Is boswellic acid – which was used in many of the studies – even found in frankincense essential oil? In The Complete Guide to Aromatherapy by Salvatore Battaglia, the breakdown of compounds in this oil are listed as: 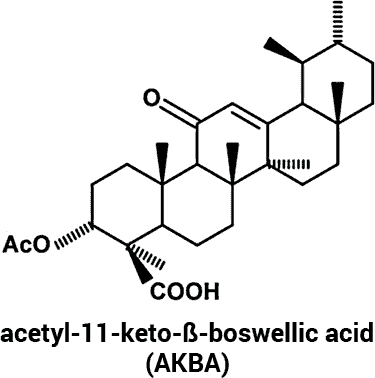 After being refined into the oil, they’re no longer present.

Those compounds seem to be the main ones the cancer research is focusing on, so it’s especially laughable that some bloggers are trying to use the studies as a means to hype the benefits of frankincense essential oils, when they don’t even contain those compounds.

But whether you’re talking about the oil or the gum, it would be dangerous to use frankincense for cancer treatment. There is nowhere near enough research to even suggest it might work.

No human studies have been done and even the lab research is quite limited. It seems there are many other far more promising compounds being researched today which are not found in frankincense.

What frankincense is good for

How to use frankincense essential oil and gum?

The answer today is not much different than it was two thousand thousand years ago when Jesus walked the earth.

The oil should be used for aromatherapy and the resin gum is great for incense. As of today, those are all that frankincense is good for. It should NOT be used for any disease.

These statements have not been evaluated by the Food and Drug Administration. This product is not intended to diagnose, treat, cure, or prevent any disease.
483
SHARES
FacebookTwitter