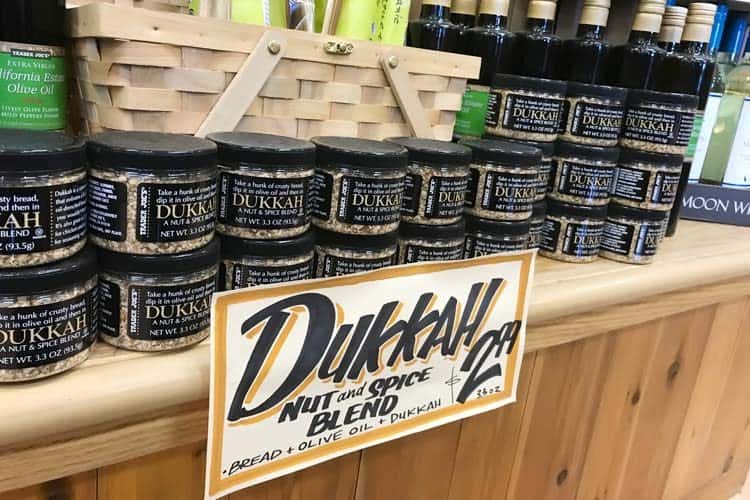 What Is Dukkah Spice Blend? Where To Buy, Health Pros & Cons

Dukkah spice is a Middle Eastern mixture of toasted nuts, seeds, and savory spices which is used for seasoning vegetables, crusting meat and fish, and adding to olive oil for dipping bread. Pronounced doo-kah, it’s believed to have originated in Egypt.

How to make authentic dukkah involves some or all of the following ingredients; hazelnuts, normal cumin, black cumin, coriander, sesame, anise, fennel, mint, black pepper, and sea salt. Less commonly, recipes will include pistachios, almonds, sunflower seeds, pine nuts, millet, chickpea flour, wheat flour, dill seeds, thyme, caraway, sumac, and cayenne. Other ingredients may be used, too. There is no such thing as an original dukkah recipe, because how it’s made varies by family and region.

It’s always vegan and normally gluten free, as use of wheat and barley are rare.

Dukkah is not the same as za’atar, which is a different Middle Eastern spice blend of thyme, oregano, sesame, sumac, and salt.

Along with strips of pita bread, street vendors in Cairo will give you this spice mix in a paper cup. It’s Middle Eastern fast food; you dip the oil-brushed bread into it. Eating it that way is modern, but the history of dukkah dates back thousands of years.

Ancient Egyptians used toasted nuts with salt and garlic as a daily condiment to make their rustic bread more palatable. What they called it may have been the very same word. Dukkah is derived from the Arabic word “to pound” which is a primitive, yet perfect description. (1)

It’s also spelled duqqa. Another name for it using English phonetics is du’ah or do’a. Same word, without the consonants. 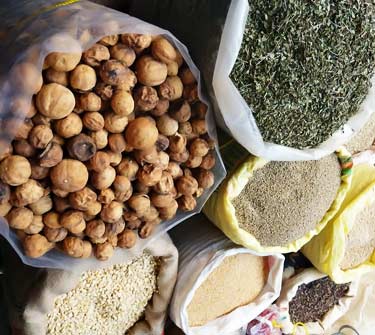 The flavor of dukkah can be described as smoky and earthy, with a satisfying crunch. The nuts and seeds treat the tongue to a fatty flavor. The spices, such as thyme and cumin, create a savory standout in any dish its added to.

Because there’s no shortage of flavors, even salt-free dukkah recipes are delicious.

The smell of dukkah is strong. When it’s fresh out of the oven and still warm, the nutty notes and aromatic herbs will carry everyone to the kitchen.

How to eat dukkah can range from a crunchy sprinkle on salads. veggies, pasta, and its most famous use which is olive oil and bread. Using it to coat lamb, chicken, or fish is flavorful but decadent, due to the large amount that’s needed.

Research suggests the following benefits may exist for each ingredient, but there is not enough clinical data for any to be considered proven. These foods should not be used to diagnose, treat, cure, or prevent any disease.

1. Hazelnuts are high in antioxidants

While ingredients do vary, this nut is one you almost always find in traditional Egyptian recipes. With an ORAC value of 9,645, hazelnuts (also known as filberts) have over 2x the antioxidant content of almonds, 3x that of peanuts, and over 4x cashews and macadamia nuts.

Even though California is a major producer, pistachios come from Iran and even today, they continue to be the largest exporter in the world. Turkey and Syria are two other major suppliers. Second only to hazelnuts, using pistachio in dukkah has been a popular practice for many generations since they’re a local crop to the Middle East.

Two noteworthy phytonutrients in pistachio are lutein and zeaxanthin. They have 1,205 mg per 100g, which is over 10x more than the second highest nut (which happens to be hazelnut). (2)

The US government’s Age-Related Eye Disease Study (AREDS) concluded that for the group with the lowest dietary intake of these carotenoids, there was a 32% lower risk of developing the need for cataract surgery when they supplemented with them. For age related macular degeneration (AMD) there was a 26% lower risk. Check out the health benefits of pistachio for more info on these studies.

Leaves of the Coriandrum sativum plant are known as cilantro in the US. The seeds are coriander. Research out of Japan reported that their water-based extracts contain a novel compound which has a significant “immunostimulatory effect on macrophages.” Those are a type of white blood cell which are first to respond to infections in the body. (3) (4)

Sesame seeds are frequently used in the dukkah nut and spice blend. Tehran University conducted a clinical trial where 50 patients with knee osteoarthritis were given either 40g of sesame or 40g of a placebo, to take daily for 2 months. Inflammatory biomarkers were measured before and after.

5. Cumin may help with IBS 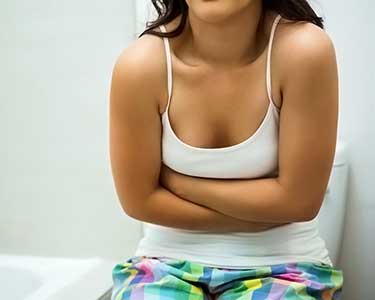 57 patients with irritable bowel syndrome (IBS) took part in a clinical trial where they received a daily dosage of cumin essential oil, in a diluted 2% concentration. They were monitored for 4 weeks on it and 4 weeks without.

When taking it, there were statistically significant improvements in abdominal pain, bloating, incomplete defecation, urgency to defecate, and the presence of mucus.

For those who had IBS with constipation (IBS-C), the improvements in stool consistency and frequency of going were statistically significant. (6)

Black cumin (Bunium bulbocastanum) has an appearance and taste similar to caraway. Cumin in dukkah is much more common than black cumin, though you sometimes encounter it.

In lab studies out of a Pakistani university, black cumin extracts showed significant antibacterial activity – up to 89% – against Staphylococcus aureus. Bacillus subtilis was at 85%. There was moderate activity against Escherichia coli with inhibition of 33%. (7)

It may be the most basic spice but it’s a bona fide superfood. 5-10% of it is piperine, which is an alkaloid that has been found to increase the absorption of antioxidants and other phytonutrients commonly found in food and supplements.

Bioavailability of curcumin is boosted by up to 2,000% (20x) when piperine is added to a curcumin supplement.

What’s bad about it?

There are potential side effects of dukkah and things which are unhealthy about it.

Allergic reactions to the spices used are uncommon. The nuts and seeds used to make it are frequent food allergens. 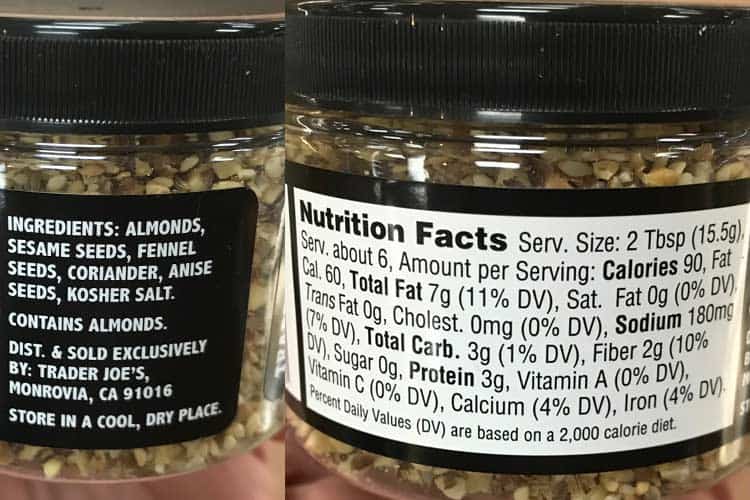 Fennel is found in premade dukkah spice from Trader Joe’s, as well as many authentic homemade versions. Fennel seeds contains estragole, which is a “potent carcinogen” that has been found to cause transgene mutations in animals. That’s why fennel tea is bad for you.

Traditional recipes involve dry roasting the nuts and seeds in dukkah, to make them golden brown. This creates acrylamide, which is a Group 2A carcinogen per the World Health Organization.

Among roasted nuts, the good news is that pistachios have the lowest amount of acrylamide. The bad news is that sunflower seeds and almonds have moderate amounts while pine nuts are the worst. Those three are commonly used in dukkah recipes. (8)

Check out our raw protein bar reviews for more info on how much acrylamide there is in various types of nuts.

Spices in dukkah such as mint, thyme, crushed peppercorn, and the savory herbs contribute minimal calorie content since they’re mostly fiber. Hazelnuts, pistachios, sunflower, and other nuts/seeds have 65-85% of their calories coming from fat. This caloric density makes dukkah bad for weight loss and dieting, if you’re going to eat more than a spoon or two at time.

In short, the traditional way of making it can be unhealthy. Simple modifications can solve these drawbacks.

The best dukkah recipe for health

Cut the carcinogens with this recipe that still uses authentic nuts and spices that are good for you.

While not traditional, a nut free dukkah recipe can be made by substituting sunflower and pumpkin seeds for hazelnuts and pistachios. A low fat option is replacing some or all of the nuts with sprouted buckwheat, which is gluten free grain-like seed.

Acrylamide formation is exponentially more at temperatures of 250°F (121°C) and above. Baking the nuts and seeds at 225° (107°C) is good and 200°F (93°C) is even better. While you won’t get the golden brown color and full roasted flavor, it will be healthier. 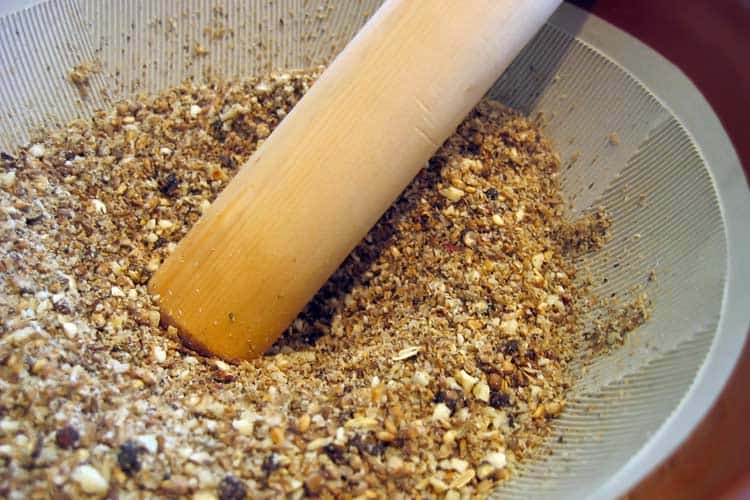 You want the dukkah spice to be dry and crumbly, not moist. Don’t keep it in the processor too long. That will liquefy the fats and create an oily consistency like a nut butter. If you don’t have a food processor,a rolling pin can work but isn’t ideal. Try this Ninja professional blender on Amazon which is affordable and will do the job quite nicely.

The typical serving size for dukkah is two tablespoons. That equals around 90 calories, 7g of fat, 4g of carbs, and 2g of protein.

Where to buy dukkah

There is a recipe on Whole Foods website, but we have yet to see them sell it in-store. Trader Joe’s sells it. Most mainstream supermarkets do not. Some might carry the brand Roland’s, which makes it with peanuts. That’s not a real Egyptian recipe.

Because Middle Eastern cooking is more popular in London and the UK, the grocery stores Tesco and Sainbury’s each sell their own brand of dukkah spice. Woolsworths and Coles in Australia sell the brand Table of Plenty.

You may find the mix for sale at a local Middle Eastern market but even there is no guarantee. Since family traditions place their own twist on the recipe, most seem to prefer homemade vs. store-bought spice blends.

Wherever you find it for sale, it’s not going to be made using raw ingredients. That’s okay though, because at least once you have to enjoy the original toasted!

One of the best tasting, favorably reviewed dukkahs we are aware of is made by The Silk Road Restaurant & Market and you can get it on Amazon.