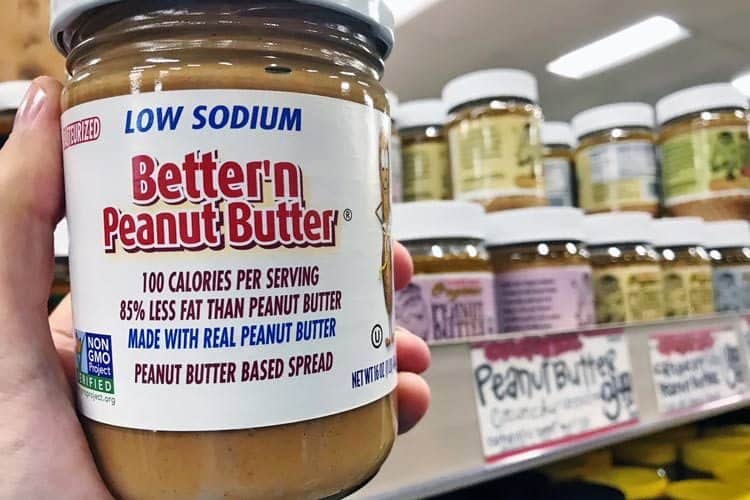 Jif and Skippy used to dominate this category, but that was decades ago.

Today, it’s all about almond butter. Especially raw and organic. As well as all those other nut and seed butters.

Despite the declining popularity of peanuts, they are a superfood.

Though only if you get the right form.

When it comes to a spreadable form, peanut butter without sugar and palm oil is ideal.

In fact, you don’t need any oil added.

Instead of adding fat, you may even want to take some away.

Doing so can be good or bad for you, depending on your goals and how it’s made.

What is defatted peanut flour?

78% of the calories in peanuts are from fat. The remainder is mostly protein. Defatted peanut flour is made by roasting the legumes and then removing some (partially defatted) or all (over 90%) of the fat content.

How peanut flour is defatted involves the use of solvents and/or mechanical pressing. What’s left is ground in a mill, to turn it into powder.

Here are the nutrition facts for plain: 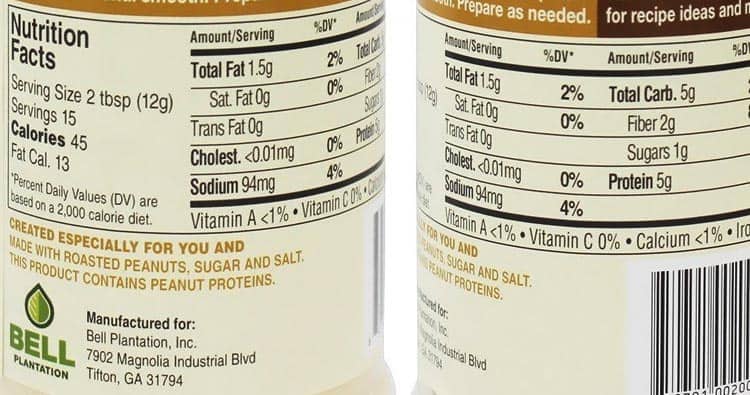 For each 2 tablespoon serving, PB2 contains a small amount of added sugar (1g) and salt (94 mg). With 45 calories, it has about 75% fewer than the same amount of regular peanut butter.

PB2 chocolate is 45 calories per 2 Tbsp serving, though it contains more added sugar; 3g. The sodium is lower at 70 mg.

While PB2 brands itself as butter, since it’s in a powdered form, technically it isn’t a nut butter on its own.

How to eat PB2 is usually in baking recipes, where a dry high-protein flour is desired. The instructions list how to eat it like normal peanut butter; mix 1 Tbsp of water per 2 Tbsp serving of the powder. Stir until smooth.

You can buy reduced fat peanut butter that is ready-to-eat out of the jar. Trader Joe’s sells a low sodium version which called Better’n. It’s gluten free, dairy free, and contains no saturated fat or preservatives. Here are the nutrition facts for it: 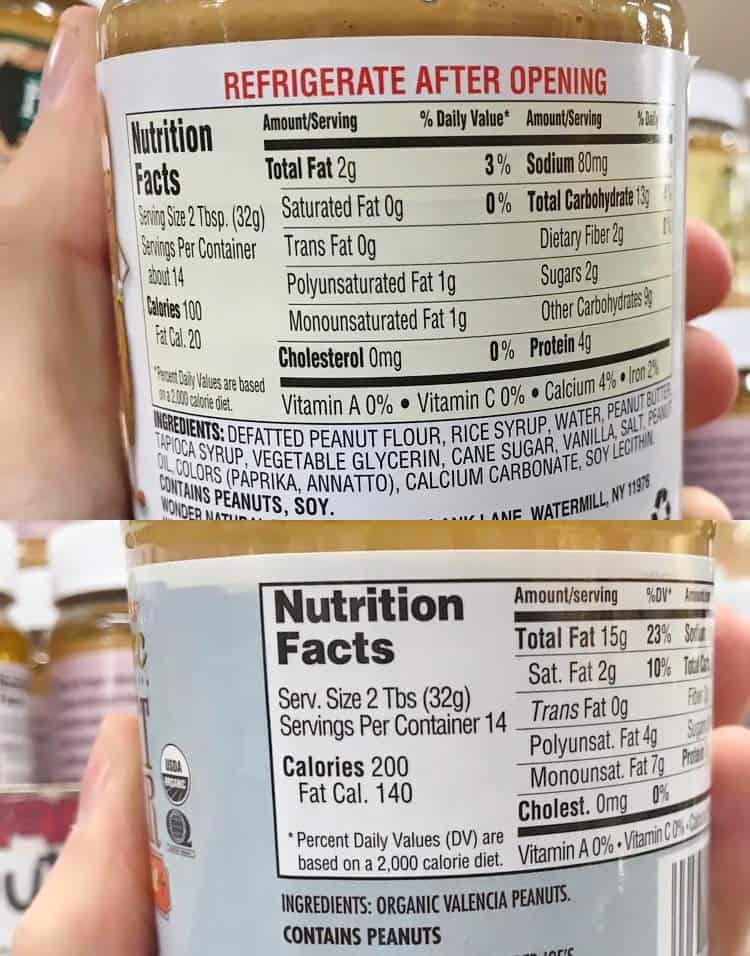 Whether it’s a dry powder or has been reconstituted with liquid, this food offers several advantages:

Fat has over twice the calories by weight; 1g of fat = 9 calories, compared to 4 calories for 1g of carbs (including sugars) and protein.

This is why the defatted is significantly lower in calories, even when they add bad stuff to it like sugar.

2. May be higher in antioxidants

Dietary fats contain very little antioxidants. Even extra virgin olive oil has an ORAC value of only 372. On an equal-weight basis, that’s less than baked white potatoes which are 1,138.

Peanuts are not appreciated for their high antioxidant content. They are among the healthiest nuts to eat. Even after roasting, they have an ORAC value of 3,166 which is higher than cashews (1,948) and Brazil nuts (1,419).

Peanuts and peanut butter are among the richest natural food sources of resveratrol. If boiled with their skin intact, they have an amount which rivals red wine.

Since the resveratrol and most other antioxidants are not found in the fats, it means they’re potentially more concentrated in defatted peanut flour.

That said, processing methods play a crucial role as to how well (or not) the antioxidants are preserved.

3. Up to double the protein, or higher

On a per calorie basis, the protein content in PB2 peanut butter is only slightly higher than regular peanut butter.

That’s because they add unnecessary calories from sugar.

Anthony’s organic peanut flour has no sugar, salt, or oils added. Each ¼ cup serving is 130 calories and contains 14g of protein. That means 43% of the calories are in the form of amino acids.

While healthy peanut flour like Anthony’s is not typically found for sale at Walmart, Target and the like, you can buy it on Amazon.

Assuming you don’t have unhealthy ingredients being added, natural defatted peanut flour is a very low carb food. Per serving, Anthony’s contains just 11g of carbs, which is 4% of the daily value. Theirs is defatted by 88%.

PB&Me No Added Sugar powdered peanut butter contains no other ingredients. While not organic, it is made from 100% non-GMO peanuts without added sugar, oil, or salt.

Each 2 Tbsp serving of plain PB&Me is 45 calories, with 6g of protein and only 4g of carbs. The other third of the calories are coming from generally healthy fats (80% unsaturated).

According to the USDA National Nutrient Database, the typical peanut flour defatted contains 4.5g of dietary fiber per 1 ounce serving. That’s 17% of the adult daily value. (1)

The nutrition facts for most brands do not list all of the mineral content. The USDA data reports that per ounce, defatted flour contains:

Keep in mind that many recipes for brownies and other baked goods will involve more than 1 ounce of flour per serving.

There is no vitamin C in defatted peanut flour, butter, or the whole raw nuts. However, all sources of peanuts are a good source of several B vitamins.

Many brands use the extreme pressures of mechanical pressing to separate the oils (fats) from the rest of the protein and carbs. Some use solvents, which inevitably leaves chemical residue behind that you are eating.

Nearly 80% of the fat in peanuts are the healthier unsaturated types; monounsaturated and polyunsaturated. That ratio of unsaturated to saturated is comparable to olive oil.

Since peanuts are a plant-based food, there’s no cholesterol in butter or flour made from them.

When defatted, these healthier fats are lost, as is the vitamin E content which is fat soluble.

3. Most add sugar and/or oils

Even though fat is 9 calories per gram versus 4 for sugar/carbs, one could argue the fat is healthier.

To make them tasty, PB&Me and PBfit defatted peanut powder add sugar to many of their flavors. PBfit may seem healthier because of the type used but don’t be fooled by coconut sugar.

PBfit and PB&Me peanut flour are not organic, nor are most of the mainstream brands.

Technically it’s a legume but as with cashews, almonds, pecans, and the popular nuts, peanuts are typically roasted or boiled. Roasting any of these creates acrylamide and other advanced glycation end products which are not healthy for you.

Whether entirely or partially defatted, peanut flour like PB2 does have drawbacks like being non-organic and using roasted vs. raw. If you buy the varieties made without added sugar or salt, it still is likely healthier than regular peanut butter for those who needing to lose weight.

If weight loss is not your goal, peanut butter with reduced fat still might make sense. Bodybuilders, athletes, and others may benefit from the higher proportion of calories coming from amino acids, including BCAAs. Peanut protein powder is a less reformed supplemental source versus whey and the various mixtures on the market.

The best types you can’t buy at normal grocery stores, or places like Costco and Walmart.

On Amazon, check out Protein Plus or if you’re okay with the price of organic, try Anthony’s.