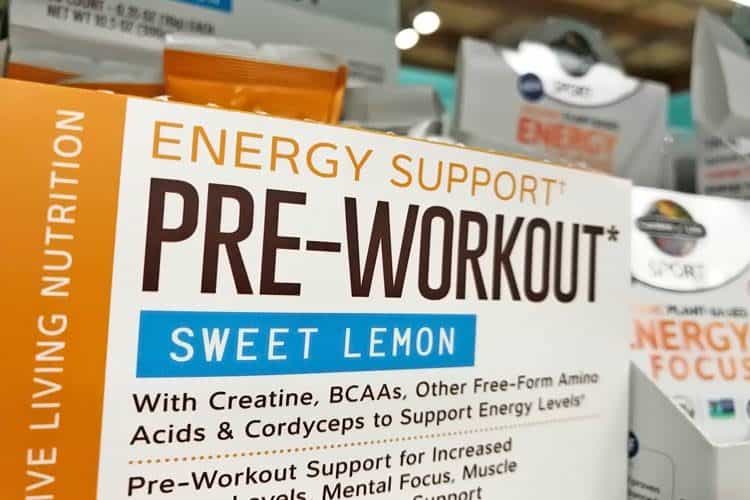 Creatine is an amino acid only found in animals. All vertebrates produce it, including mammals, reptiles, birds, and fish. It’s primarily found in their skeletal muscle.

Because it’s only made by animals, there’s no such thing as vegan creatine, at least when it comes to natural food sources. However, most creatine monohydrate supplements are synthetically created using non-animal based ingredients.

What’s used to make creatine supplements is sarcosine (or its salts). Those can naturally be found in both animals and plants. Sarcosine is combined in a reactor with cyanamide, which is a compound used in agriculture and pharma. Neither ingredient is naturally sourced (too inefficient). The synthesized versions are vegetarian-friendly and generally gluten free.

The highest natural food sources of creatine will be meats made of muscular tissue. The supplemental dosage of 5g, which is a commonly used amount for the maintenance phase in bodybuilding, can be found naturally in 1 kg (2.2 lbs) of beef and pork. In salmon and some other fish, there’s up to double the amount; 10g per kg. (1)

Eating 2 lbs of meat or fish daily just to achieve the maintenance amount would not be easy to do, or healthy.

Harder yet is obtaining 20-25g of creatine per day from food. That’s the typical beginner’s dosage for muscle building. You would need to eat up to 11 pounds of beef per day to achieve that!

Given the high amounts of meat you would need to eat just to get a 5g dosage, both vegans and omnivores often turn to supplementing.

Though to be clear, you don’t need to take. Not even vegans.

Your body naturally makes creatine on its own. It’s a non-essential amino acid.

Based on multiple human trial results, a meta-analysis reports a 12-20% improvement in strength being achieved from taking creatine supplements. (2) (3)

The max amount of weight you can lift may go up. There’s an average boost in power of 12-26%, according to the same meta-analysis.

This will be an unwanted side effect for most people, though skinny bodybuilders sometimes have difficulty gaining weight and wish to do so. Due to increased water retention, weight gain is a benefit (or side effect) of creatine supplements that’s almost guaranteed to occur.

There will be a significant increase in water weight within the skeletal muscle tissue. In a university study involving athletic young men, water weight went up 7.4 lbs (3.4 kg) after 4 weeks of using creatine monohydrate daily dosages of 15-30g. (4)

It may not be by a large degree, but several clinical studies report anaerobic cardiovascular capacity going up in young male swimmers, rugby players, athletic women, male runners, bodybuilders, wrestlers, and other physically fit groups of people. (5) (6) (7) (8) (9) (10)

Technically known as sarcopenia, age-related muscle loss amounts to 3-5% per decade after you hit age 30. A meta-analysis looked at 22 clinical studies involving older men and women (averaging 57-70 years old in each study). The conclusion was that supplements of creatine help preserve lean muscle tissue in both the upper and lower body. (11) (12)

Some studies report men having higher testosterone and free testosterone levels, relative to the placebo treated groups. However, the advantage appears small. (13)

At least three human studies have been published using 3-5g dosages of creatine monohydrate per day. In patients subjects, particularly the females, it correlated with less depression according to widely used metrics, such as the Hamilton Rating Scale for Depression (HRSD). It’s believed this benefit is due to serotonin, since creatine appears to boost the efficacy of SSRI treatments. (15) (16) (17)

Fatigue and headache frequency plummeted from 90% to 10% when children and teens used this amino acid for 6 months following traumatic brain injuries . (18)

While there are well-documented bodybuilding benefits, some believe creatine supplements are bad for you because of kidney damage risk and the potential for carcinogens. The side effect of weight gain from water is undesired by most. Minor adverse reactions like stomach ache, nausea, diarrhea, and muscle cramps are relatively common. 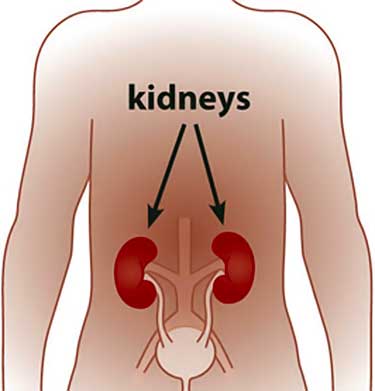 The impact of creatine monohydrate on kidneys is largely misunderstood.

As with all amino acids, they get processed by these organs. As such, high amounts could be hard on the kidneys. Yet the same holds true for protein-rich foods and supplements in general; too much of them are bad for your kidneys. Long term overdosing could result in kidney stones and permanent organ damage.

The kidneys metabolize creatine into creatinine. When they can’t process and clear proteins fast enough, metabolites such as these get “backed up” in the blood. High blood serum levels of creatinine are telltale signs of kidney disease.

What’s misunderstood is that creatine supplements can create an artificially high level of creatinine in the blood. In other words, a false-positive on blood tests. (19)

There are case studies and situations where damage (interstitial nephritis) occurs during supplementation, though generally they are with diabetics and people who have abnormal or unhealthy kidneys to begin with.

The long term safety of using 5-20g of creatine daily is not known. Short and mid-duration uses of a few months has not resulted in abnormal kidney function in healthy adults. (20)

A bigger – yet lesser known – risk of taking creatine is the formation of heterocyclic amines (HCAs). These are highly carcinogenic compounds.

They’re group 1 carcinogens according to the World Health Organization, which is the worst kind there is. (21)

These carcinogens and mutagens in meat have been clearly linked to increased rates of tumors in the colon, stomach, prostate, and breasts, among other areas. (22) 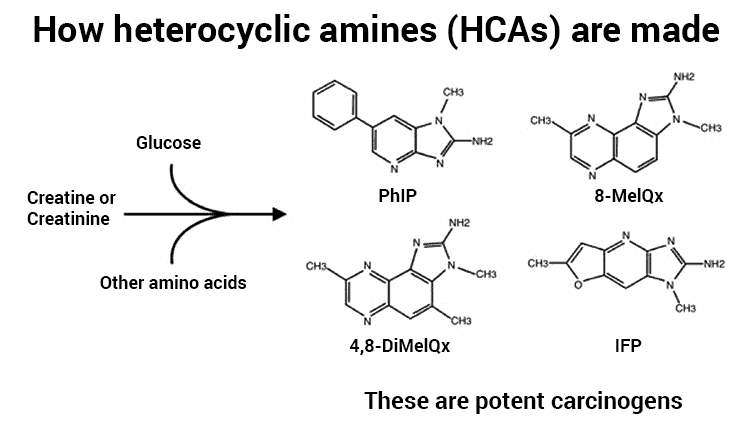 Heterocyclic amines are found in meat. Vegans don’t have to worry about eating them, because their formation requires the presence of this specific amino acid.

Cooking meat of just about any kind will create them. Grilling, frying, and other concentrated high-heat sources will produce more. Boiling/steaming will produce less. (23)

Unlike the kidney damage concern, creatine cancer risk specific to supplements has very little research. The first human study on the topic wasn’t even published until 2015.

The University of Sao Paulo conducted a small study with 9 people; 6 on placebo and 3 on creatine supplements. They tested their blood levels after 1 day and 30 days of usage for some of the most common types of heterocyclic amines like MelQ, PhIP, and IFP.

Those on the supplements were given a 7g or 20g dose of the monohydrate form for the first 7 days, followed by 2g or 5g daily for another 23 days. These were called low and high doses, respectively. 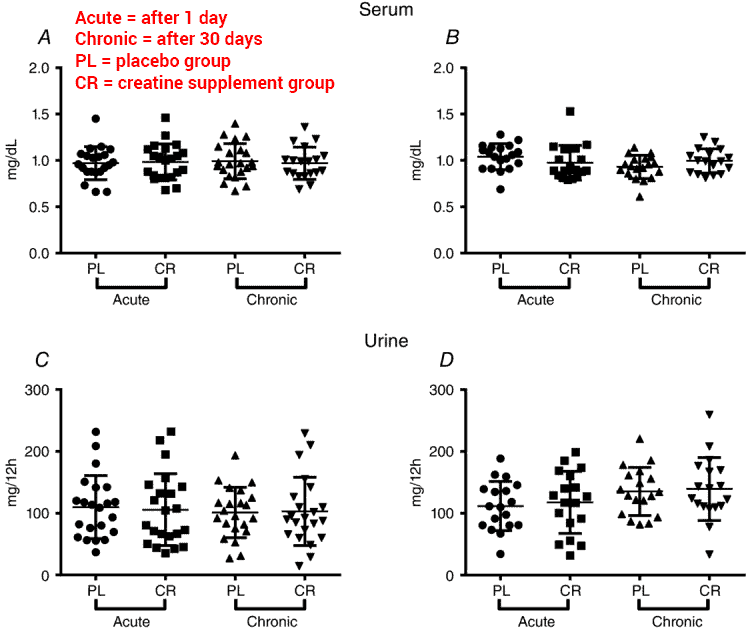 The good news is that there was not a significant difference seen between the treated and placebo groups.

The bad news is that with only 3 people on creatine and 7 on placebo, it’s an awfully small sample size.

Plus, they conveniently did not measure the levels before supplementation – the earliest reading is taken 1 day after starting. Was there a bias in this study’s design, where it was done in a way to promote the industry and perceived safety of this supplement? (24)

Taking creatine every day for weeks, or even months at a time, appears safe in healthy individuals when it comes to impact on kidneys and other major metabolic functions like blood pressure, blood sugar, and cholesterol. Most side effects experienced, like weight gain from water or indigestion, are more of a nuisance than a serious health risk.

That said, the possibility that creatine contributes to the formation of cancer-causing compounds (HCAs) in the body remains unknown.

Food sources of HCAs involve cooked meat. Most are under the impression that heat is required to create them, however recent findings have found that HCAs can form under physiological conditions; like a pH of 7.4 and 98.6°F/37°C. Therefore, the potential side effect of creatine supplements increasing cancer risk cannot be ruled out.