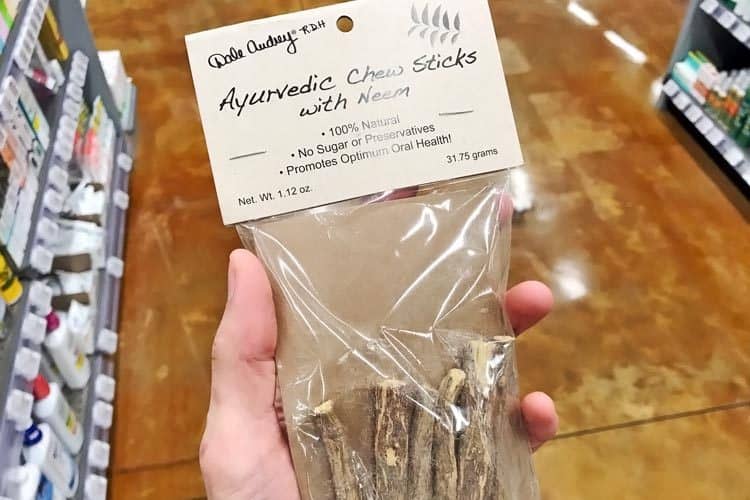 In full disclosure, no one here smokes or has a history of doing so.

Admittedly, we are ignorant as to what it’s really like to battle this addiction. We can’t claim to know!

Though we do know the devastating effects that cigarettes have first-hand, that’s for sure.

The parents who smoked for decades before quitting successfully. The grandparents who didn’t quit soon enough, resulting in premature deaths from lung cancer and heart disease.

So we have plenty of experience watching others try – often unsuccessfully – to kick the habit.

Of course there’s the Nicorette gum and Chantix, which is the prescription medication proven to be 3x more effective than placebo.

But if those treatments haven’t worked for you in the past, or you are looking for something safe to use alongside them, have you considered Ayurvedic or African chew sticks?

What are chew sticks?

Before the modern age allowed for affordable production of nylon bristles, chew sticks were the go-to treatment for dental hygiene. 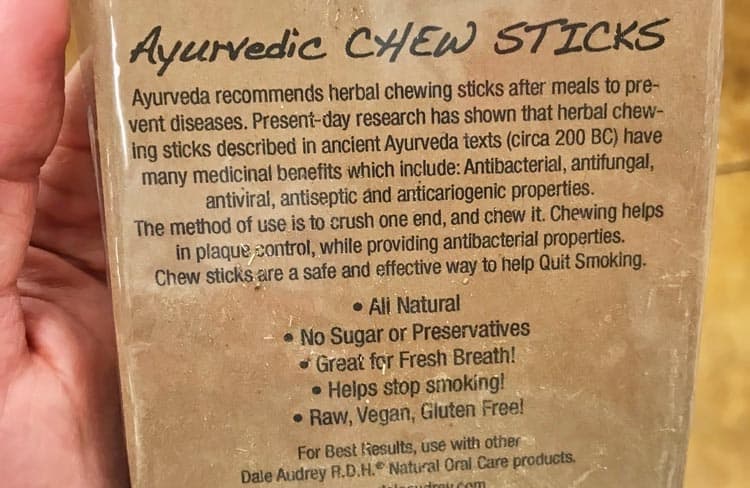 Unlike a toothbrush which you rub against the surfaces of your teeth, chew sticks are twigs which are chewed until frayed. This creates a natural brush-like texture which can also serve as a toothpick.

Dental chew sticks for humans have a history which dates back to at least 3,500 BC. Records show that the Babylonians used thin twigs with frayed ends for cleaning their teeth. Later on, both the Greek and Roman empires used them in much the same manner. The Chinese took these sticks to a whole new level. Sometime around 1,600 BC, they began specifically using the wood of trees which tasted good and freshened breath.

Of course today, plastic bristles are seemingly used the world over, but not by everyone. Even people who can afford a Crest or Colgate smile don’t always opt for one.

Neem chew sticks are popular in the Ayurvedic medicinal practice of India.

Miswak is the Arabic word for a chew stick made from the Salvadora persica tree. While it’s more common in the impoverished Horn of Africa, even in wealthy Saudi Arabia they remain popular. Miswaks were purported to be important to Muhammad in the Islamic faith.

There’s the Jamaican chew stick, locally known as gouania lupuloides. It comes from a plant in the Rhamnaceae family.

You can read more about their history in Medical Meanderings.

Wherever you look in the world, chances are you will find a history of teeth cleaning twigs. While that’s their first use, many claim they can help curb cravings, including hunger, overeating, and the desire to smoke that Marlboro or Newport.

Despite their popularity, formal human clinical trials have not been done on this topic. However, numerous trials have been done for chewing gum and certain flavors in relation to nicotine withdrawal symptoms. Results suggest they can help.

The psychology department at Oklahoma State University did a study with 45 undergraduate smokers. They were asked to chew plain gum, smoke, or do nothing in response to a public speaking task.

Keep in mind that was with non-nicotine, regular gum. (1)

In another study they did using good ol’ Wrigley’s, they reported:

“Results from this study indicate that when gum was present, participants took significantly fewer puffs and abstained for a longer period of time until their first cigarette. These results suggest that chewing gum may facilitate quit attempts.”

Those folks had access to cigs, but chose on their own free will to use them less… if the gum was available. (2)

When it comes to nicotine-spiked gum (e.g. Nicorette) it’s obvious as to why it helps. Though the clinical evidence confirms it’s more than just the nicotine content.

In fact, a half-year study out of Denmark involving light and heavy smokers found that nicotine-laced gum only worked best in heavy smokers. For the light smokers, surprisingly it was a silver acetate chewing gum which helped more than nicotine gum or plain gum. (3)

The reason it helps is because the silver ions produce an unpleasant metallic taste in the mouth of tobacco users. Therefore, it leads to a self-induced deterrent to cigarettes. (4)

The science of using flavors in gum to deter smoking dates back to at least 1977.

That’s when success was clinically demonstrated using Tabmint. It was made of 6 mg of silver acetate, 10 mg of ammonium chloride, and 0.025 mg of co-carboxylase as the active ingredients. (5)

Okay, but what about more natural flavor deterrents?

A study out of a UK hospital found that simple glucose tablets reduced cravings:

“Single dose of glucose has a relatively rapid and detectable effect on desire to smoke and the effect is not mediated by feeling sick. Glucose tablets may be useful in helping to control desire to smoke during periods of abstinence.”

That was chewing 4 tablets which each contained 3g of glucose. In other words, 12g of sugar… 3 teaspoons worth.

Better than inhaling smoke? Probably. Though still not healthy.

For a sugar-free option, a randomized and controlled trial out of Thailand found that simply sucking and chewing on fresh lime (Citrus aurantifolia) worked almost as well as nicotine gum! 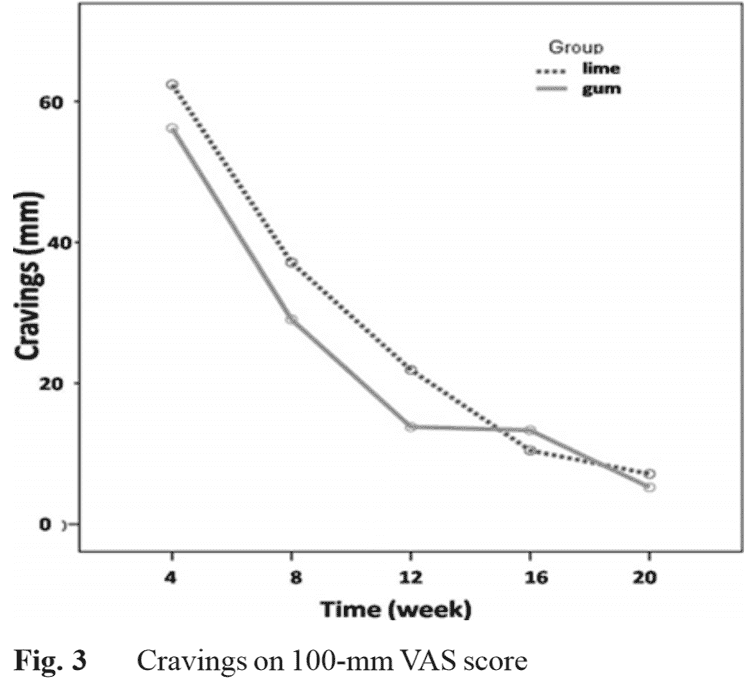 Participants were instructed to suck on a 1/16th piece of the fruit, followed by chewing its skin.

Lo and behold, their half-year success rate was similar to that of nicotine gum: 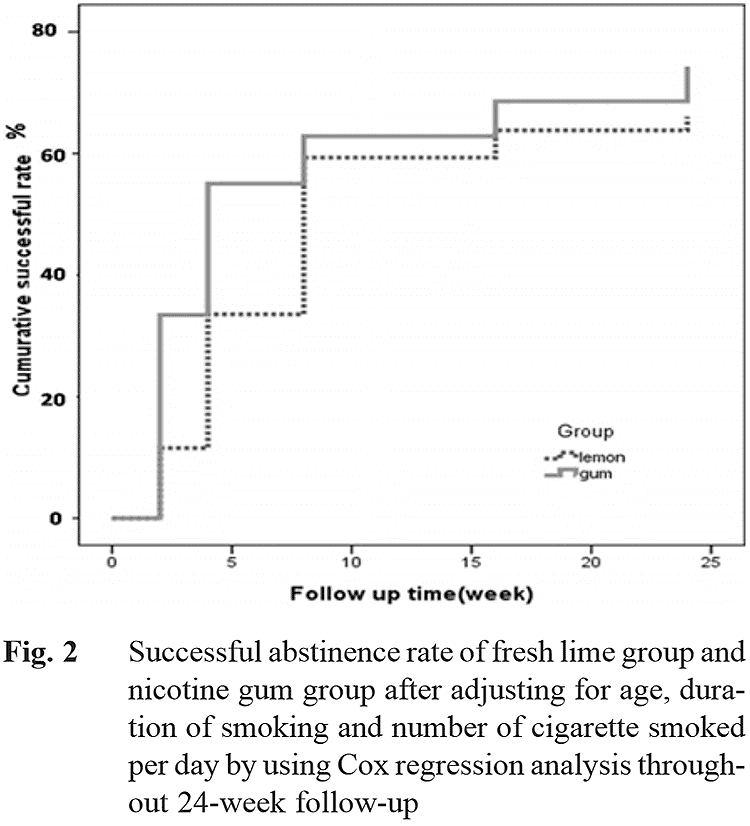 Surprising, but not that surprising, because it’s more than just the nicotine which is helping to reduce cravings.

The distraction of chewing serves as venue for getting out that stress induced from the desire for another cancer stick.

That’s probably why one of the earliest studies on nicotine vs. placebo gum found that the latter still correlated with about 1/3rd the success rate. There were 315 people in that study, it was published in 1991. (6)

Even though unflavored and flavored chew sticks have not been clinically evaluated as a smoking cessation tool, there is plenty of evidence to support their two mechanisms helping; the action of chewing and the effect certain flavors may have on cravings.

The best chew sticks to help you quit smoking might be neem and other aromatic woods. They offer antioxidant activity and possibly other health benefits from the essential oils inside.

Tea tree and licorice sticks should be used with caution, especially when it comes to men, because those two plants are high in phytoestrogens. Cinnamon sticks should also be used rarely if ever, because the common cassia cinnamon contains a known liver toxin. Ceylon cinnamon is fine but uncommon.

An added health benefit they offer

While people many assume modern plastic bristles are the most effective way to clean your teeth, it may not always be the case.

The Saudi Dental Journal published a study done by the Swedish Board in Periodontology. Healthy women and men, ranging from 20 to 60 years old, participated in this single-blinded and randomized trial.

They used miswak, which are the traditional Middle Eastern chewing stick. Their performance was pitted against regular toothbrushes.

Surprisingly, there was no statistically significant difference in plaque levels between the miswak users and toothbrush users.

Even though they were both equally effective with 2 minutes of usage, the miswak performed better for shorter periods of time.

So if you brush your teeth in 30 or 60 seconds, the sticks might actually be healthier for you! (7)

In short, while the efficacy of using chew sticks to substitute cigarette cravings has not been clinically evaluated, other benefits of better dental hygiene have been confirmed.

Health aside, even the best sticks will be cheaper than a habit of even Pall Mall or Kool. With how the states sock you on those taxes these days, it’s an expensive habit you need to break for your financial health, too!

The package pictured in this review is a product we spotted at a Whole Foods store in Los Angeles. Aside from that chance encounter, we haven’t seen the Ayurvedic neem, Jamaican, or licorice root chew sticks for sale, nor the North African miswak. Then again, we haven’t been looking for them.

If you’re going to find them, chances are it will be at a natural food mart or co-op that carries a good selection of obscure products. Or at least, obscure to America and Europe but not the rest of the world.

On Amazon you can buy the Dale Audfrey Ayurvedic sticks pictured above using this link. Note that they combine the neem with licorice root, so it’s probably not the type you want to use a lot.

When you’re shopping for them online, make sure you don’t mix up the chew sticks for dogs, cats, hamsters, rabbits, and puppies. You see lots of those, but few for humans!

While we haven’t tried them ourselves, there is a very popular brand called Miswak Club (yes, for humans) that you can get on Amazon. Check out those reviews!