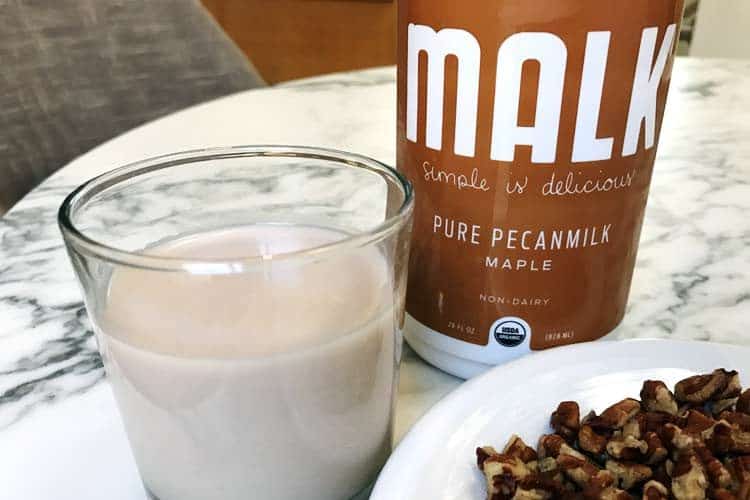 Cashew Milk & Pecan Milk Recipes: Good For You or Worse?

Since the Central Valley of California is responsible for nearly 80% of the world’s almond crop, when the drought hit high gear a few years back, plant-based milk manufacturers were left scrambling for soy-free alternatives.

Peanut milk wasn’t a viable option. While not a nut, this underground-growing legume could work, but too many are scared of peanuts due to fear of an allergy (and often it’s without merit).

Cashew turned out to be the best option. The big brands like Silk and So Delicious have launched several products for that nut, including creamer and ice cream. Everyone already knows those things are naughty, but is cashew milk healthy?

You will understand why it might be the worst dairy free milk in just a moment.

Can you make pecan milk? Yep and it turns out to be one of the best nuts to use.

The biggest benefit is that pecans are the highest antioxidant nut.

When you compare all of the major nuts in their raw form, the high ORAC value goes to pecans and it wins by landslide:

However there is an Achilles’ heel. Several actually. While pecans may have the most antioxidant activity, they also have these downsides:

For those allergic to cashews (like one of us here) those drawbacks may not matter.

For everyone else who simply wants a better alternative to Almond Breeze and Cashew Dream, do the pros of pecan outweigh the cons?

Only if you can overcome these three major nutritional hurdles… 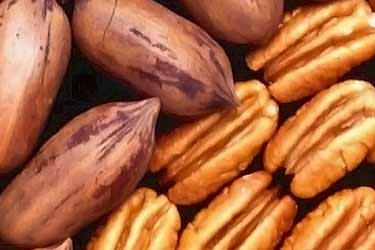 Rather than do a combo of a couple different kinds, they’re strictly using this high calorie option.

Perhaps that’s fine in small amounts, such as a splash in your morning coffee.

If you want something to pour into your bowl of cereal (or two) every morning and then again for your protein shake, pecan milk may not be healthy for you.

If you’re watching your weight, it will be too many calories.

A recipe for almond and pecan milk may seem like a tasty blend (and it is) though it won’t be much lower in calories. How much almonds there are in almond milk is shockingly low – as little as 2%. That’s why those popular brands can be 35 or 40 calories per serving for their unsweetened versions.

Here’s a run down of the nutrition facts for every major nut so you can decide, based on the criteria most important to you. The amounts below are based on a 100 gram (3.5 ounce) measurement.

Not everyone has the time or inclination to soak these puppies overnight and then liquefy them in a Vitamix, before straining (which is the typical homemade recipe).

Even if you enjoy doing that, you may not always have the time. Everyone needs an off-the-shelf option on occasion.

Where to buy pecan milk?

The only brand currently manufacturing 100% pure pecan milk is the brand Malk Organics, out of Houston. The following stores carry them:

Not every location for these retailers will carry Malk. For example, the Whole Foods in Miami was not selling it at the time of this review, but the Los Angeles stores were.

Even for the retailers which do carry the Malk brand, you may find them selling their more popular vanilla or unsweetened pure almond milk and not the pecan with maple flavor.

What is it? Not the drink from The Simpsons episode! 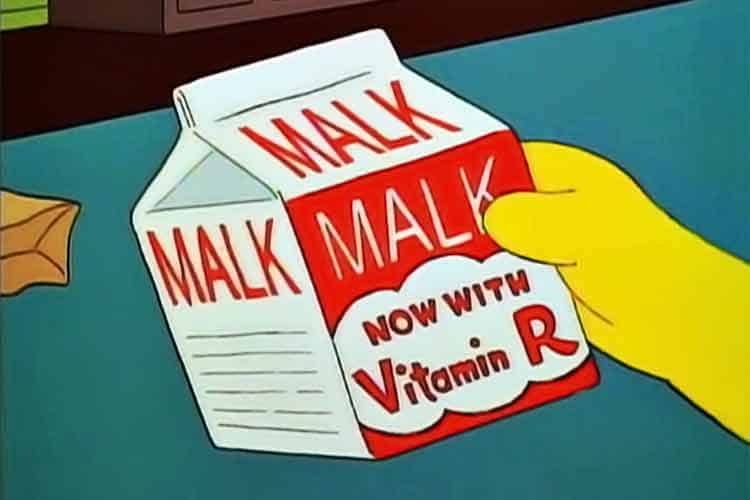 Bart was in the lunch room complaining about his brittle bones, realizing his carton of milk was actually MALK with vitamin R (whatever that is).

Whether or not this real-life brand was inspired by The Simpsons is unknown, but what we do know is that they are a dairy free imitator that’s not crappy.

That last point may sound like criticism, but it’s not entirely. The reason it has the same texture on your tongue as water is because there are no emulsifying agents like lecithin, or fillers like carrageenan and guar gum. Here’s what’s inside the bottle: 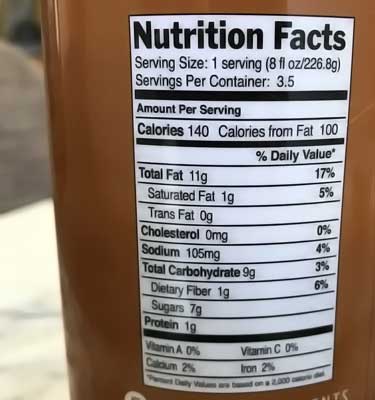 It’s not that they’re doing anything wrong or cheapening their ingredients by watering them down. Rather, the problem is with pecans itself. Being such a high calorie nut, you can only use so much of it.

Malk is 140 calories per serving.

If you removed the 7 grams of sugar coming from maple syrup, that would only shave off 26 calories. You would still be left with a 114 calorie watery drink with lots of fat and practically no protein.

You could double the amount of nuts to make it milkier, but then you’re approaching almost 300 calories per serving, if you kept it sweetened.

And guess what? You probably do want it sweetened. Or at least, some other flavor added.

Why? Because as yummy as it is in sugar-laden pies, when you eat this nut raw and liquefied, it doesn’t actually have much flavor.

In other words, if you left off the maple, you would be drinking a 114 calorie beverage with little to no taste!

These are the problems with buying it premade. Only one company makes it and while it is high quality, the way it’s made falls short. 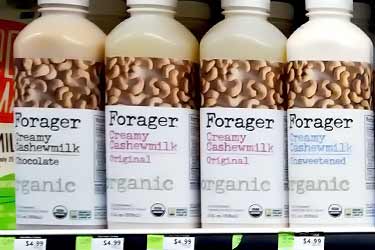 If you want to pony up $5 for a tiny bottle of Forager cashew milk, you can buy raw.

The Malk brand is innocent on this front too, since they use cold-pressing, too. But take a gander at the popular websites touting a homemade pecan milk recipe. Many are advising you to use roasted or baked for flavor enhancement.

The fact that roasting destroys much of the antioxidants is the least of your worries. The bigger problem is the potential carcinogens it creates.

Ditto for dairy free substitutes at the grocery store made with nuts.

When certain foods are exposed to high and concentrated forms of drying heat, what forms are advanced glycation end products or AGEs (also called glycotoxins). Many of these are either official confirmed carcinogens or suspected carcinogens.

The cancer causing AGEs in grilled chicken are by far among the worst. Heterocyclic amines are in that and 4 of them are official carcinogens; PhIP MeIQ, MeIQx, and IQ, as per the U.S. Dept. of Health and Human Services Report on Carcinogens (1).

Though vegans have stuff to worry about, too.

In a plant-based diet, perhaps the biggest problematic food for the creation of AGEs are roasted nuts. Those don’t have HCAs, but they do have acrylamide.

While not ranked as bad as the benzo(a)pyrene in meat (Group 1 carcinogen by the World Health Organization), acrylamide is only one notch better… it’s a Group 2A carcinogen. That means while not conclusively proven yet in humans, for animals there is “sufficient evidence” it causes cancer.

The fact that acrylamide is not yet 100% proven in humans is not surprising, because it’s not like you can go out and conduct clinical trials where you intentionally administer someone high amounts of a suspected carcinogen!

Dangers like these take decades to prove, especially when they might have the potential to turn the food industry upside down.

Is cashew milk good for you?

Considering the high calories and lack of protein in pecans, perhaps making this beverage with cashews seems like a healthier choice.

Actually, after you see the following data, you may change your mind.

Here’s a look at the total AGEs content in a number of ingredients related to plant-based milks, as well as some other foods for comparison.

We left peanut butter in, because it’s an example of a highly processed nut. Well technically it’s a legume, but it does undergo the same processes as to how almond butter is made.

Pecans weren’t measured in this study, nor are we aware of any others measuring how much advanced glycation end products (glycotoxins) there are in raw or roasted pecans. So determining whether they’re average, better, or worse than other nuts is not possible at the moment.

Avoiding AGEs altogether in your diet is impossible, but there are easy trends to follow which will dramatically reduce how much you consume.

Even though a raw food diet may be the best way, cooking is not the problem here. As you see, a boiled potato is only 17, while a fried potato (fries) are 1,522.

For most foods, it’s only certain methods of heating which cause the insanely high amounts. 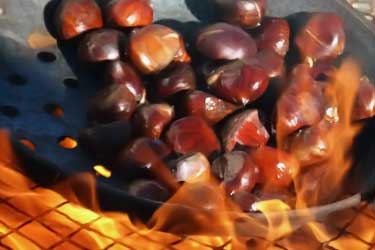 The only thing roasted chestnuts should be used for are words in a Christmas carol.

Unfortunately, mainstream America is only concerned about their nuts being organic and is totally oblivious to the potential danger of how they are heated. The big offenders are:

Boiling is fine, because the moisture exponentially reduces how much is created.

Not all raw foods are saints though.

Glycation occurs when sugars or fats bond inappropriately to proteins. For that to happen, heat or some other trigger is needed. You can look across God’s entire plant kingdom and you will find that most produce almost no AGEs, if you were to eat them raw and not sun-dried. But there are a few outliers…

Both raw and cooked nuts contain AGEs, but how much each type has can vary greatly. Raw cashews are worse than roasted almonds!

How is that possible? Well cashews are a strange nut. Most people have no clue how they grow… 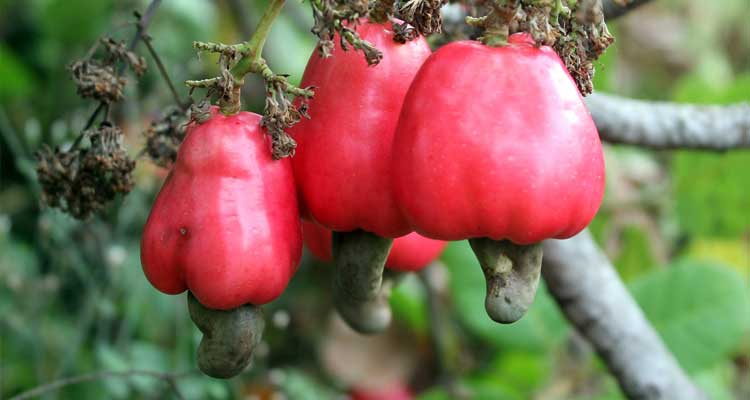 They grow in pods which are attached the bottom of a false fruit!

As to why their AGEs content is so high, it’s not clear.

One theory is that might have to do with the heat and UV rays of the sun, which might cause their fats to glycate (that’s why avocados also have moderate amounts of AGEs). Figs can have the same problem, as their sugars can glycate.

Whatever the cause, the conclusion remains the same…

Drinking lots of cashew milk might be bad for you, given how much AGEs the nut contains, even before roasting or blanching.

That probably rules out So Delicious and Silk cashew milks as good alternatives to the hassle of homemade pecan.

Then again, how much cashews there are in cashew milk is probably comparable to almond… not much. Perhaps those fillers aren’t so bad after all!

What plant based milk is best?

There are two ways to answer this question.

If you’re going to make it yourself, using pistachios is ideal. It offers the best mix of benefits:

Where can you buy pistachio milk? Almost nowhere. A tiny brand out of New York City, Elmhurst Harvest, does sell it commercially, but they’re a mom ‘n pop sized operation. We’re not aware of a single grocery store which carries them and in fact, we’re not even sure if Elmhurst is still in business given that their Facebook page hasn’t been touched for over half a year.

If you need a premade milk, the healthiest may be those which have minimal amounts of almonds and instead of a filler like carrageenan, one that uses pea protein to give it a more milky texture. 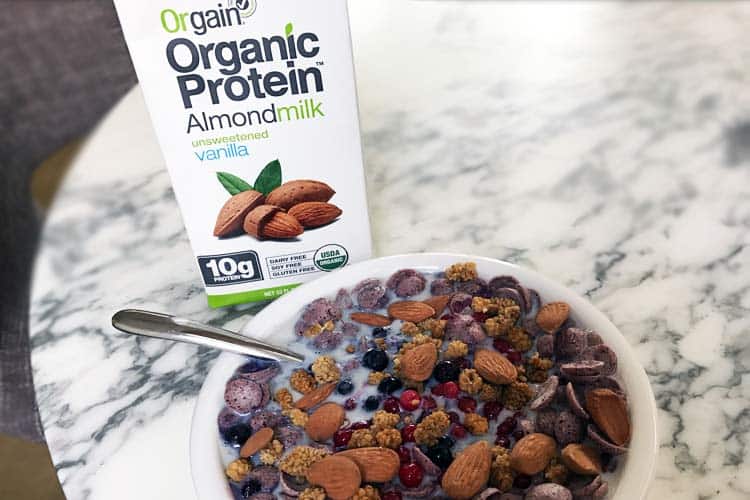 Not only does the protein from peas add nutrition, but it’s a substantially lower calorie way to thicken up plant-based milks versus 100% nuts. Our favorite that does this is Orgain and since it’s shelf-stable, you can buy it on Amazon.

By the ways, this is the cereal brand in that picture. Purple corn is high in antioxidants, too.

Now if you’re willing to do all the legwork, here’s how to make pistachio milk which is homemade and delicious. Add the benefits of pecans if want, but only use a little given how many calories they have. 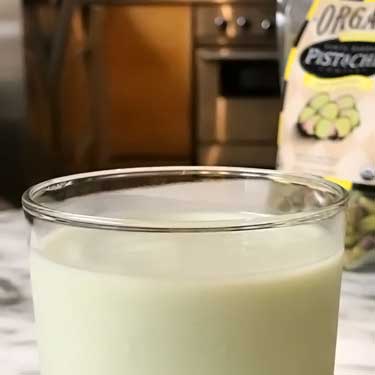 Based on today’s science, this might be the healthiest nut milk around.

115 calories and 3.5 grams of protein per serving.

If you want the full nutrients, you’re done. If you want zero grittiness and no stirring required, then continue.

Straining with a milk bag will reduce calories and fat, but also protein.