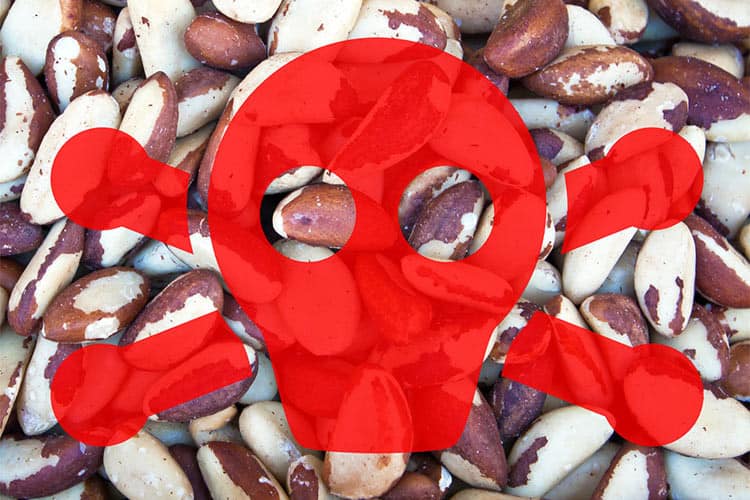 Are Brazil nuts good for you? Do they contain toxic radiation? Can they cause a selenium overdose with side effects?

You may be surprised to hear the answer to all three of these questions is yes, technically speaking.

Of course, you’re probably wondering how can something be good for you when it possesses those two characteristics?! Well those headlines are half the story, you need to hear the rest… 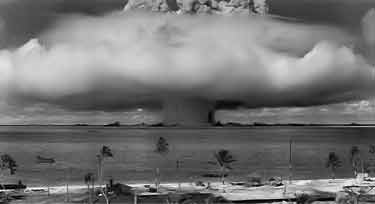 Let’s address the elephant in the room… are they radioactive? This is not a myth, it’s true.

Their radium levels can be up to 1,000 times higher than what you will find in other foods. This is not caused by pollution or elevated levels of radium in the soil, but rather the very elaborate root system of the Brazil nut tree.

With such a large and extensive network, the roots filter water and nutrients from more soil than your average tree (1).

That means they’re taking in more of many things. More minerals – such as selenium – and others naturally found in the earth, including radium. To be clear it’s the latter, not selenium, which has radioactivity. The radium content in Brazil nuts is not dangerous on a relative basis.

If you’re making our vegan Chex Mix recipe you may want a good Brazil nut substitute. Our recommendation would be pili nuts. Similar taste and without the radium. As seen on Shark Tank, try Pili Hunters brand on Amazon.

A person’s exposure to radiation is cumulative over a lifetime. It’s not like say, catching a cold, where your body fully recovers back to normal after a little time has passed. The more exposure there has been to radiation, the more cell mutations that have taken place, and therefore the increased likelihood of cancer as time goes by (cancer is basically a cell mutation gone wild).

However the idea of cell mutations should not scare you. Oxidative DNA damage, due to environmental and metabolic processes,  occurs at a rate of 10,000 to 1,000,000 molecular lesions per cell, per day. That may sound like a lot, but it’s only 0.000165% of the human genome. Our bodies are quite good at repairing these, but not all get repaired (2).

Even though its statistically more likely for an older person, there’s no rule that says a damaged cell can’t mutate out of control at any time, regardless of age (and hence, why we also have the horrific tragedy of cancer in babies and children).

For that reason, many argue that any excess or unnecessary exposure to radiation in life should be avoided, including the most radioactive foods. Potassium 40 (40K), radium 226 (226Ra) and uranium 238 (238U) are the most common radionuclides in food.

Here’s a look at some common foods and their content of potassium 40 and/or radium 226:

All food has some radioactivity. Therefore if you want to avoid foods and beverages with radiation, it’s literally impossible.

Rather, a much more effective approach to avoiding excess radiation would be the exponentially higher doses we experience elsewhere in our lives.

For example, CT scans expose us to very high levels of radiation and therefore a doctor should carefully consider if they are needed when ordering them (3). An MRI is a radiation-free alternative, which often (though not always) can be used instead of a CT. 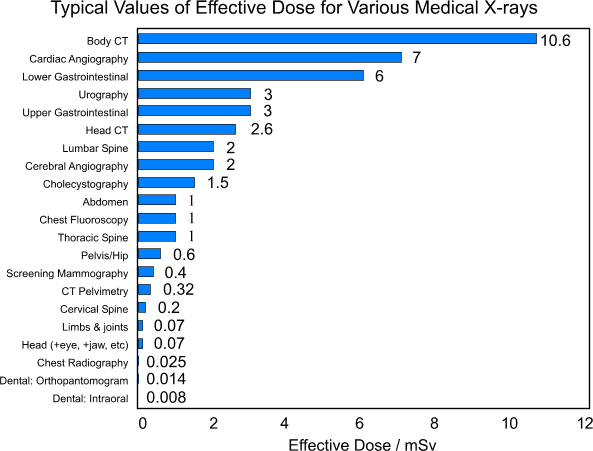 If you do the math, Brazil nuts have around 60% more radiation than a banana. When converted, that’s 0.00016 Millisievert per nut.

To put that in perspective, a single X-ray of your limbs/joints exposes you to 437.5 times more radiation. And anyone who has broken a bone knows that doctors love to take many X-rays of the same thing, at many different times (e.g. 3 or 5 images at time of injury, another 3 or 5 images two weeks later, and so forth). So really, for a given injury, you’re probably getting several thousands of times more radiation than a Brazil nut.

A whole body CT exposes you to 66,250 times more radiation than a Brazil nut.

Think about it… that means if you receive just one less unnecessary CT scan during your entire life, then you’ve probably offset the entire cumulative lifetime exposure of radiation from Brazil nuts (and then some).

How much selenium is in one Brazil nut? Just one ounce (6 to 8 nuts) contains 544 mcg of selenium, which is the equivalent of 777% of your Recommended Dietary Allowance. That means even a single nut can contain up to 91 mcg of selenium – that’s 165% of the RDI for adults. 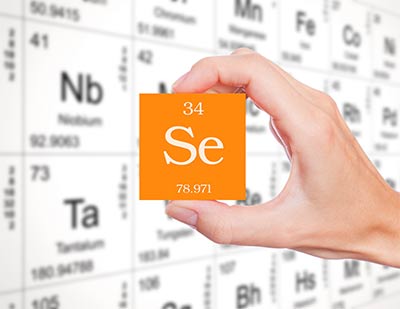 But selenium is an essential nutrient for humans. It has important uses in our thyroid function, DNA synthesis, and reproductive system. Additionally, research has suggested it may help prevent cancer, offer neurological benefits, and reduce a person’s risk of joint inflammation. The NIH states most Americans consume sufficient amounts already; 108.5 mcg on average for Americans 2+ years of age (4).

So that of course leads to the logical question, are high amounts of extra selenium toxic to your body?

It is possible to overdose. The NIH lists 400 mcg as the Tolerable Upper Intake Levels (ULs) for selenium in both males and females age 14 or older. For a younger person, the limits are significantly lower. Since just 6 to 8 nuts contain 544 mcg of selenium, you don’t need to be good at math to understand one can quickly surpass those levels with even a small handful of nuts!

However just because one approaches or exceeds the Tolerable Upper Intake Levels, it does not automatically mean they will experience side effects. Though as the amount of excess selenium intake goes up, the overdose symptoms become more likely.

According to Merck Manual, 900 mcg/day is a “high” dose which causes toxicity. Side effects include nausea, fatigue, diarrhea, irritability, a garlic-like breath odor, hair loss, and nail abnormalities (5). Is it possible to eat too many Brazil nuts and overdose, experiencing such symptoms? Yes, it can occur and the number of nuts needed to reach that level is not particularly high. How many Brazil nuts you should eat a day is only one or two, according to many nutritional experts.

Are they bad for you 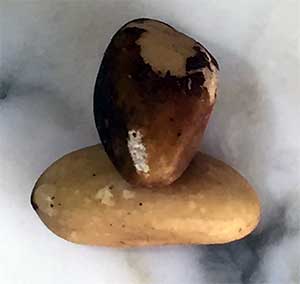 Between their higher radioactivity and high levels of selenium, you may wonder why healthcare professionals and nutritionists aren’t telling us to avoid them like the plague. So are Brazil nuts good for you? Yes, in moderation.

The reason is that for most of us, they are a good and healthy food, so long as we only eat one or two per day.

But why eat them? The antioxidants in Brazil nuts are not particularly impressive, so that’s not the reason. The reason many recommend them is specifically for their high selenium content.

One or two nuts per day is sometimes recommended during pregnancy and for those trying to get pregnant. The Recommended Dietary Allowance of selenium is slightly higher for a pregnant woman; 60 mcg per day versus 55 mcg for non-pregnant woman. Even then, since 1 nut contains up to 91 mcg of selenium, it doesn’t appear those circumstances would change the maximum recommended number of nuts per day.

Since selenium overdose or poisoning is very possible with Brazil nuts, discuss with your doctor before modifying your diet and adding or increasing the intake of a food such as this.

In a nutshell they’re not preferred bu okay, so long as you don’t snack on them in handfuls like you would with pistachios or jungle peanuts. If you want a healthier option, substitute them with pili nuts.