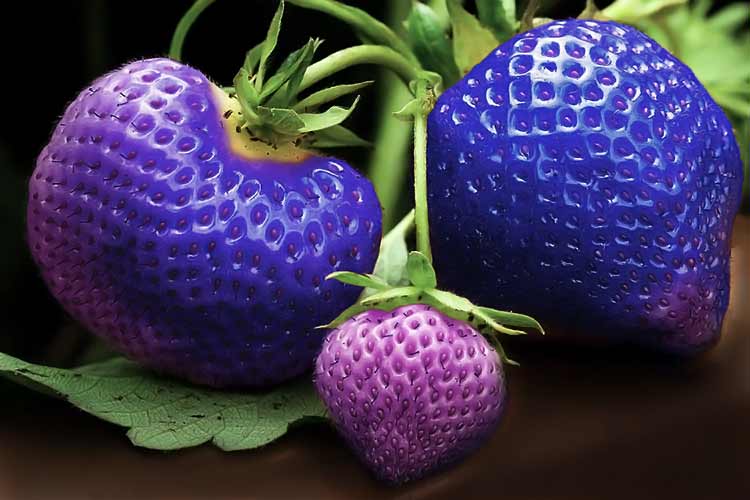 Is there such thing as a man-made or natural blue strawberry? Or do black strawberries exist?

For years now, there has been reporting – including from very high-trafficked websites – that scientists have taken the red garden variety (Fragaria x ananassa and related cultivars) and genetically modified it.

But we’re not talking your run-of-the-mill GMO fruit or vegetable.

The claim is that scientists have injected the plants’ seeds with certain genes coming from the arctic flounder fish (Liopsetta glacialis). It’s a species of fish which has built-in natural antifreeze, protecting it in the polar waters.

Antifreeze glycoproteins or AFGPs are found in a number of other cold water fish, too (1). Some sea birds have them. However the type found in the artic flounder – Type I-hyp AFP – is said to be the most effective at preventing freeze.

As a result of the genetic engineering, they have created what looks to be a neon Crayola blue vegetable, instead of the bright red we are accustomed to (yes, strawberries are a vegetable).

Some photos look purple, while others are of an almost black colored berry. Whatever the case, they’re far different versus a red strawberry.

Even the Wikipedia entry about the breeding of this plant has a paragraph about the transgenic modification using fish. As far as their color, that’s not mentioned (2). Snopes is silent on this GMO concoction altogether.

Why was it supposedly made? Because the food industry wanted a version which could be frozen, but wouldn’t taste like it after thawing.

The media sources claim that while they have been created, there are not blue strawberry plants for sale yet to the public.

Who owns it? It’s not Monsanto. Whoever does own the frankenfood is never made clear in the media reports. Allegedly though, the owners have not decided when and how they plan on commercializing it.

So if you want to buy the seeds to grow in your garden next summer, you’re said to be out of luck.

Since it’s not yet for sale, that question cannot be answered either, or so they say. Some sites actually claim its flavor is the same as the normal red varieties, but their wording infers they are only reporting the taste second-hand, rather than eating it themselves.

It is a hoax or for real?

Okay so we’ve given you the elevator pitch as to what folks are saying about it. Now for the truth. Is there really such thing as a blue strawberry?

Like many rumors, there is a smidgen of truth in its origin.

The part that’s true may surprise you. Scientists really have toyed with the concept of using Arctic flounder in fruit! It dates back over 20 years ago.

The USDA’s National Agricultural Library cites an industry journal article about transferring the protein gene of winter flounder to the strawberry plant. It was published in 1998. (3)

Two years later, it was brought up in an editorial piece about genetically modified foods by The New York Times (4):

“Thus, an antifreeze gene from Arctic flounder has been introduced into strawberries to extend their growing season in northern climates. But contrary to what many people think, this does not make the strawberries fishy…”

But even if it did make them fishy, would it really make the berries bright blue?

Whomever the original hoaxers were apparently wanted to play up the “antifreeze” angle by Photoshopping them to have the same fake color as the automobile coolant.

Well actually, most engine antifreeze these days is neon green, but apparently that wasn’t a color considered to be exotic enough for this big scam.

Whether automotive antifreeze is fluorescent blue, green, red, orange or yellow is not even coming from the active chemicals. Those are artificial dyes added.

The reason they add the colors is for identifying the source of leaks. Similar to smell added to natural gas (which actually has no odor). 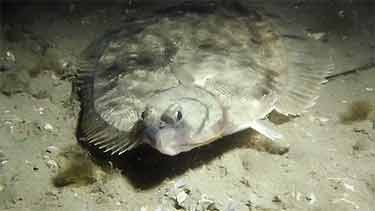 As far as the arctic flounder species they’re not the color of Dory from Finding Nemo. Their color is a boring muted grey.

So even if you are eating one of these GMO vegetable-fish hybrids, you won’t be able to discern it based on appearance nor on taste, since it does not create a “fishy” flavor.

If you want to eat blue strawberry shortcake, your recipe will need FD&C Blue No. 2 or other natural food coloring. Ditto for black.

As far as why this vegetable is naturally red vs. blue (like blueberries), it largely has to do with the pH of their anthocyanins (a class of plant pigments, which are also type of antioxidant).

In the aforementioned food coloring link, we actually show you how to change the color of red cabbage water to become baby blue, by modifying the pH with baking soda. 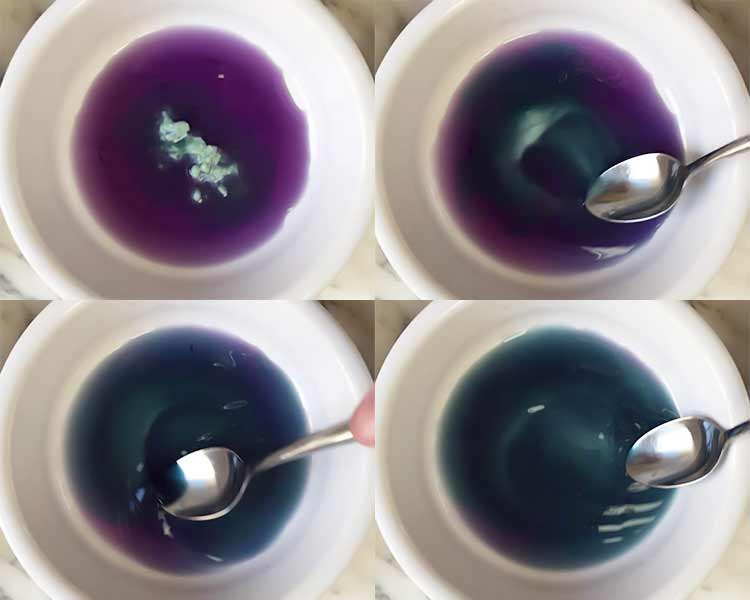 Doing the same trick with strawberry juice doesn’t work though.

If scientists wanted to make them blue colored, theoretically it might be possible.

To do so, they would start by tinkering the genes responsible for the fruit’s pH. By altering that, the color and type of anthocyanins produced would change. That’s what the difference is between the anthocyanins in this fruit and blueberries.

To create a black strawberry, using genetic information from – duh, the blackberry – would be a good place to start. But no one has done it yet, or at least if they have, it’s not public.

When will the rumor die? 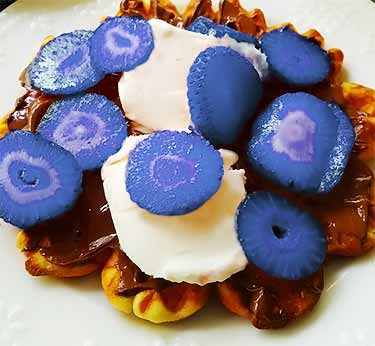 Seemingly, forever. Here we are in a new decade and it just won’t stop.

This isn’t helped by the fact that some in online media are not doing their research and instead, reporting the blue and purple strawberry to be the real deal.

Then you have buffoons on places like YouTube who make a 2 minute video of it, which is not even a real video, but rather a pathetic slideshow of Photoshop pics collected from across the web.

To show you how simple this hoax is, we personally Photoshop’d every pic you see in this article.

We’re pretty awful with Photoshop, so if we can do it, anyone can.

If we didn’t want to make our own pics, all we would have to do is go on Ebay and elsewhere, where you will see folks selling blue strawberry seeds. Some claim to include pink, yellow, black, and neon green!

Whether they’re meant to be a parody or gag gift is unclear. None of those offering it for sale which we had looked at were based in the US. The seeds were being shipped from China, Thailand, Malaysia, Philippines, etc.

Some sellers call them “rare” African blue strawberries. If you search for that on Wiki or anywhere else, you will come up empty-handed. No such species exists in botany.

Rather than tell you our opinion of the seeds for sale online, you can read the customer reviews and view the photos yourself, to draw your own conclusion.