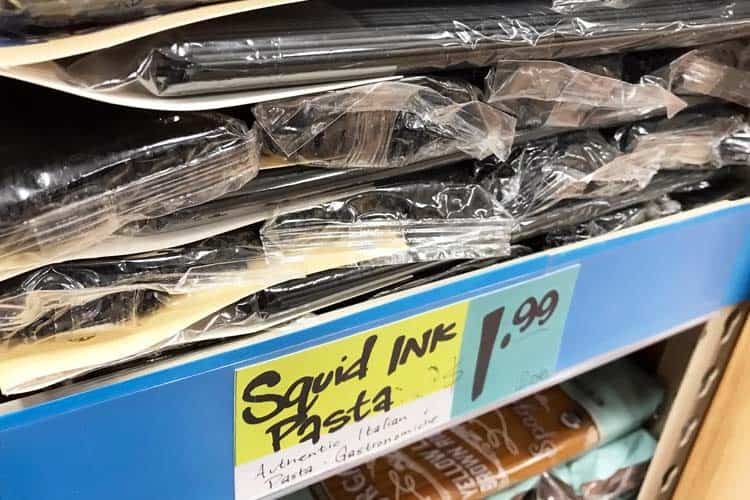 Is Black Squid Ink Pasta and Coloring Bad For You?

It used to be an ingredient you would only encounter at fancy restaurants in big cities. Or perhaps a gourmet culinary store.

Trader Joe’s black squid ink pasta can be bought for the low price of just $1.99. That’s for a 12 oz bag of durum wheat semolina spaghetti. It’s imported from Italy.

Sure, the black novelty is cheap, but is it healthy?

What is black squid ink?

Cephalopods are a marine class of animals which include octopus, nautilus, cuttlefish, and squid. At least 800 species have been identified to date.

As a defense mechanism, most cephalopods can release a cloud of ink in the water to confuse predators.

What comes out of cuttlefish is generally dark brown. Octopuses make true black. Squids are more of a bluish-black but when concentrated, you can’t tell the difference.

Back in the day, these excretions were mostly used for writing; reloading quill pens.

Today, eating them is their only use. 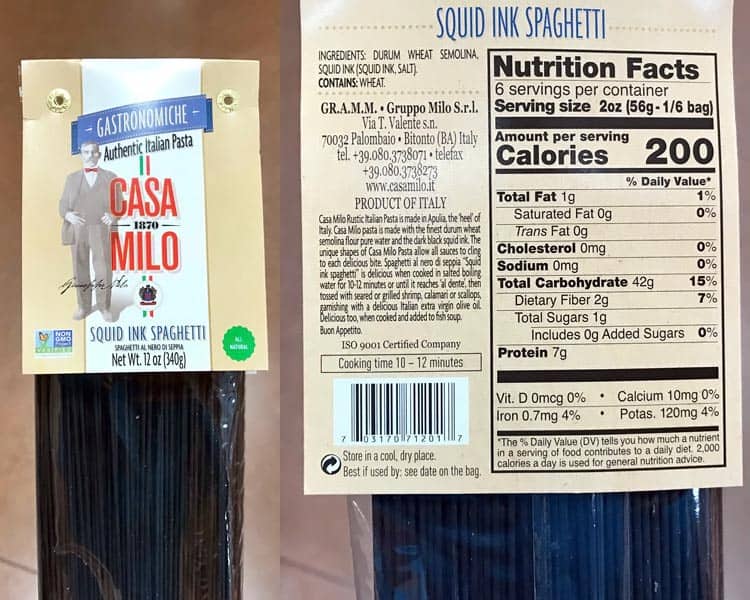 You’ll find it in this Trader Joe’s spaghetti.

It’s called “nero di seppia” in Italy. There and Spain are where the stuff is commonly used in cooking.

Black squid ink is a food coloring extracted from certain species of dead squids. It’s mostly made of melanin, which is produced by the animals’ melanocytes cells; through the oxidation of the amino acid tyrosine.

In humans and other animals, melanin is what adds color to hair and skin.

There is also a large amount of mucus, but this is typically not found in the culinary grade colorings since those are extracted directly from the ink sacs. When the live squid excretes it in the water, it releases both the dye and mucus together.

Black squid ink isn’t poop but it may contain trace amounts. That’s not a myth. The sac which stores the ink is adjacent to the intestine. When squirted, it passes through the anus. There it combines with mucus particles, to create a substance which looks thick and cloudy in the water.

Since the ink passes through the anus, technically there may be fecal matter which passes along with it.

Also, the mucus is the same intestinal mucus which is part of the fecal composition.

Pure squid ink is not poop. Since the ink for cooking is harvested directly from the storage sac, there shouldn’t be any fecal matter combined with it. However in the wild, when a living squid excretes it, there may be a bit of poop along with it. 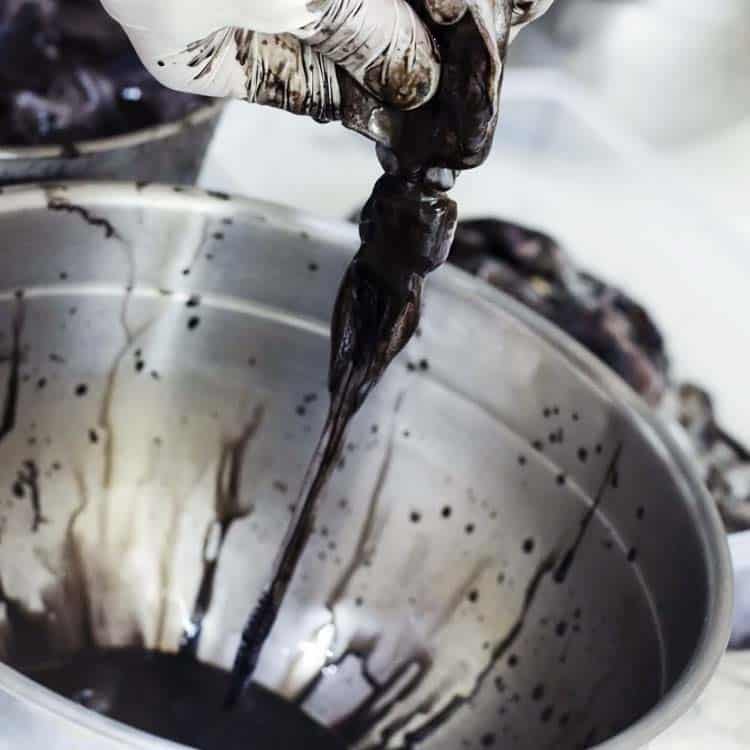 The pure ink has a strong flavor; like salty brine. Surprisingly, it’s not a fishy taste. Since most recipes for black pasta noodles, risotto, paella, gelato and other foods only use a tiny amount of squid ink, the overall effect on flavor is generally neutral.

What squid ink is used for in cooking is to add an intense natural black color to dishes. It’s not used as a flavoring agent.

The ink is definitely black, not white!

Unfortunately, its safety is not a black and white answer.

The thinking used to be that this pigment was just a smokescreen. Nothing sophisticated. Just a cloud of dye to confuse predators.

There appears to be more to it than that.

Extensive studies to confirm these findings have yet to be done, yet there is anecdotal research which suggests that compounds in black squid ink impair the chemosensory systems of some other marine life.

For example, those of moray eels which eat squid.

Their chemoreceptors respond to certain chemicals. They’re made of neurons (nerve cells) which appear to be adversely affected, or at least stimulated by, the ink of squid.

Even though humans don’t have these same sensory systems, we certainly have neurons.

The dopamine in the ink is in a minute quantity and therefore, unlikely to cause side effects or benefits in humans. Though it’s not there by accident. It’s said to be…

“…produced in specific compartments of mature ink gland cells, distinct from the production of melanin.”

In fact, it’s even been confirmed that these melanin granules absorb the dopamine, ensuring it’s not lost in the water.

That tells us that it’s not merely a byproduct of the dye, but rather something designed to be added to the dye.

The amount dopamine in food would be so trivial, it shouldn’t affect humans one way or another. Dopa beans are a much more potent food source.

Black squid ink is toxic to certain microbes and viruses in vitro (lab research). The tyrosinase has been found to be toxic to several cancer cell lines used in research.

In addition to tyrosinase, the enzymes tyrosine hydroxylase, dopa decarboxylase, peroxidase, and dopachrome could theoretically have direct biological effects, but they haven’t been tested. Therefore, it’s unknown if they are good or bad for your health.

In summary, squid ink is poisonous to at least some lifeforms. However, that anti-cancer and antimicrobial activity may be a benefit. Though it remains unknown whether there are unsafe side effects happening in healthy human cells, when one eats exotic black foods colored with it.

Squid ink has not been Generally Recognized As Safe (GRAS) by the FDA. That’s not to say it’s unsafe to eat, but the agency has not been presented data by a food company/manufacturer to reasonably prove it’s safe to eat. The safety of eating it while pregnant or breastfeeding hasn’t been adequately studied in animals or humans. (2) (3) (4)

The verdict on eating it

Though questions remain about its safety, achieving a jet black color using natural food dyes is difficult to do.

The best vegan food coloring for achieving natural black in frosting and baked goods is blackstrap molasses. That’s the same ingredient used to give black licorice candy its color.

As far as something with a relatively neutral taste that will hold up in boiling water, such as black linguine or other pasta, the squid juice remains the most effective option, at least aesthetically.

While obviously not vegan, for omnivores it probably remains a better option than artificial food dyes. It is gluten free and generally food allergy friendly. However if you have a shellfish allergy, don’t eat it. You may want to avoid it during pregnancy just to be safe.

Where to buy squid ink

There’s a good chance that higher-end grocery stores will carry a product or two containing it, such as black squid ink pasta. Many locations of Whole Foods and even Trader Joe’s sell it.

The ink of black squid on its own is hard to find in-store. While there’s a chance the supermarket may have it, your best bet is a high-end culinary store or getting it online. Since the Italians and Spanish call it cuttlefish ink, that’s usually what you will see on the bottle.

Rather than commit to a big expensive bottle, on Amazon try these little packets by Alma Gourmet. They’re imported from Spain.