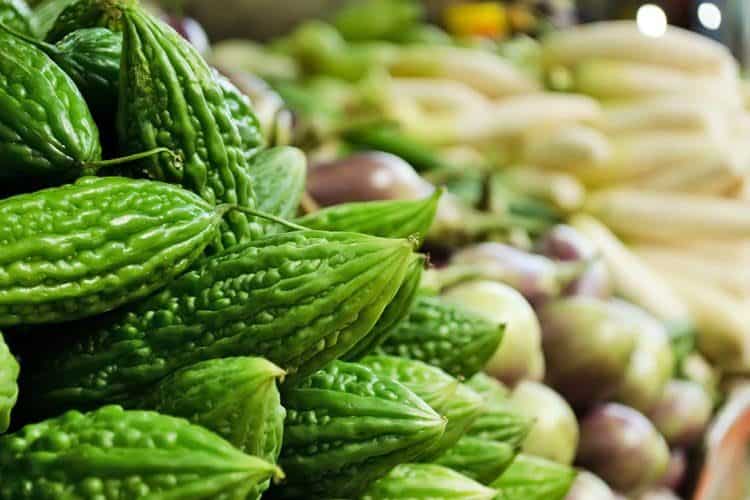 But it’s not an apple, nor a pear.

It’s in the same family as cucumbers, watermelon, cantaloupe, squash, and zucchini (Cucurbitaceae).

Unlike those fruits and veggies, this is not something you’re likely to see at an American supermarket. It’s wildly popular is India (where it’s from) and many countries throughout East and South Asia.

What is bitter melon good for?

The fruit looks like the face of a shar-pei with its wrinkled appearance. The edible pulp has a pungent taste. This astringency comes from the high levels of quinine, which is the same thing that gives real tonic water its flavor. This is why mixing the melon juice with drinks is a popular use.

Because of its bitter taste, you don’t eat bitter melon raw. It can be cooked by steaming or pan-frying. The astringency meshes well with high-fat foods. Coconut milk curries, soups, and stir fry are all recipes you can use it with success. 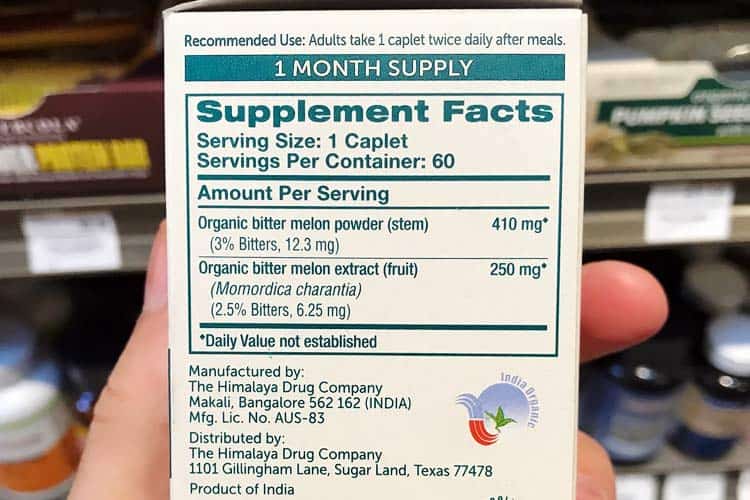 As a supplement, it’s marketed for supporting a healthy glycemic response.

It’s not food, but medicine, as to what bitter melon is mostly used for. Health benefits for diabetes have robust research. Ayurvedic and other traditional medicinal uses include weight loss, blood pressure, gout, acne, liver, weight loss, and cancer. There is not sufficient scientific evidence to prove any of these benefits and some have no formal research.

The most studied medical uses for the melon are diabetes and blood sugar control. The fruit contains at least 3 bioactive compounds which have been found to lower blood glucose levels in humans, animals, and in vitro (lab).

Vicine – Also found in fava beans, this alkaloid glycoside is actually toxic in quantity and dangerous to people who have glucose-6-phosphate dehydrogenase (G6PD) deficiency, which is a hereditary condition. (2)

Polypeptide-p – Bitter melon is the only dietary source of this compound, which appears to mimic the effect of insulin in the human body. (3)

Charantin, vicine, and polypeptide-p are the active ingredients in bitter melon which have been found to lower blood sugar through various mechanisms.

You will find nearly one thousand pieces of medical literature on the Momordica charantia plant in the PubMed database. Thirteen of them are peer-reviewed human clinical trials. All but three are related to blood sugar. The others are cancer, metabolic syndrome, and blood pressure.

The first diabetic study was in 1977 and it was conducted by a medical college in Jaipur, India. They reported:

“This extract was homologous to insulin obtained from animal pancreas. It showed a consistent hypoglycaemic effect in patients with diabetes mellitus.”

How long does it take for bitter melon to lower blood sugar?

Nine patients tested included those with type 1 diabetes (juvenile) and type 2. A fasting blood sugar sample was measured at 7 am, followed by a bitter melon dosage of 10-30 units via injection. The lowering effect was seen within 30 to 60 minutes. Peak effect was at 4 hours in those with juvenile diabetes and 6 to 12 hours for those with adult onset and chemical diabetes (type 2).

Throughout the study, they called it “vegetable insulin.” Note they didn’t use the whole fruit or leaves, as it was compounds isolated from the fruit. (4)

Known as karela juice in India, a 1981 study used a 200-250 mL dosage, which was made with a simple pestle and mortar. They also tested cooked bitter melon (fried). In the 6 men and 3 women of normal weight with diabetes, both the bitter melon juice and the fried fruit reduced plasma glucose concentrations; up to 5.8 mmol min/l. The max benefit was 60-90 minutes after. 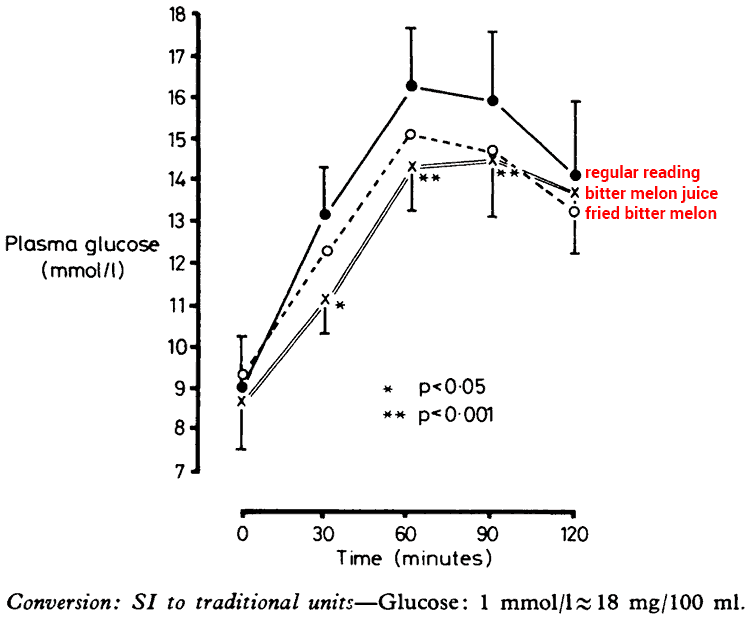 This was published in the British Medical Journal. (5)

The third and last study from last century was published in 1999. It was much larger, with 100 cases of non-insulin dependent diabetics. Drinking the vegetable pulp produced hypoglycemic (lowering) benefits in 86% of patients. 5% showed a lowering of fasting blood glucose only. (6)

The larger and newer studies

The first randomized, double-blinded, and placebo-controlled trial wasn’t published until 2007. It took place at a hospital in Manila, Philippines.

Diabetics taking the bitter melon supplements experienced a 0.22% decrease in HbA1c levels but there was no statistically significant advantage on fasting blood glucose, or the secondary parameters measured like cholesterol, weight loss, and liver enzymes. Side effects were mild and uncommon. (7)

The next study, in 2009 out of Pakistan, made the following conclusion:

“…the study showed that bitter melon could be more effective in the management of diabetes and its related complications as compared to rosiglitazone.”

That study was focused on sialic acid. During type 2 diabetes, levels of this acid in the blood are higher than normal. That correlates with adverse effects, like higher creatinine (evidence of poor kidney function) and risks for developing diabetic retinopathy. The latter is the leading cause of blindness among Americans. (8)

25 patients took the melon while 25 took the medication, rosiglitazone. There wasn’t a statistically significant advantage for those using the herbal remedy, the balsam pear juice. However, the researchers still recommended it, because it was associated with fewer side effects. (9)

The next study in 2009 was the smallest. It was out of Canada and used 5 overweight but non-diabetic men. The freeze-dried bitter melon supplement, taken orally, did not help their blood sugar or insulin levels. (10)

The most recent trial was in 2015, out of a Pakistani university. 95 patients were split into the following treatment groups:

There was no advantage for HbA1c between the groups. The so-called “bitter apple” had a weaker blood sugar lowering benefit than glibenclamide, but it was said to reduce cardiovascular disease risk factors more effectively. 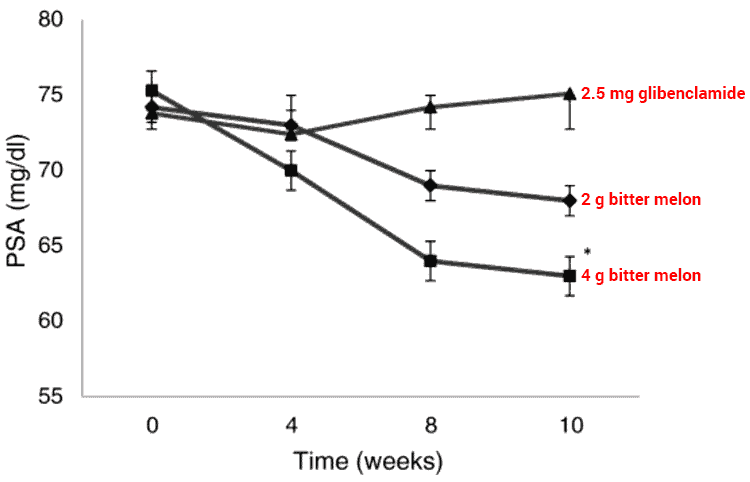 There was significant reduction in fructosamine levels with the melon and only that group experienced noteworthy PSA level reduction. Lower cholesterol and triglycerides were also observed in the high dosage melon group (4g daily). (12)

Despite being used for centuries to treat diabetes, even before the disease was identified, only recently has the scientific community begun to evaluate it. Much of the research has been within just the past two decades.

While there is not enough clinical data to prove that bitter melon can help with diabetes in a predictable and safe manner, it’s obvious there are blood sugar lowering effects being seen in controlled trials.

The best way how to use bitter melon for diabetes is not yet known. The compounds need to be isolated and further tested. The 2015 trial does suggest that the raw bitter melon juice or fruit pulp may work better than dry powder.

“Although, we do not have a solid reason but it might be possible that drying and further processing during powder preparation may cause loss and/or inactivation of some active ingredients notably the polypeptide-p.”

This was based on performance data of the fresh fruit vs. dried.

Where to buy bitter melon

Finding fresh bitter melon near you is not easy if you live in the United States or Canada. Likewise for the UK, France, Germany, most of Europe and Australia. Due to the astringent flavor which is not sweet and requires the right culinary approach, westerners have yet to adopt this food on widespread scale.

You can buy fresh bitter melon at Whole Foods, not all but some locations. Many upscale grocery stores are also known to carry karela, especially in major cities which have higher populations of Indian and Asian inhabitants. Many of them are accustomed to cooking with it and therefore, support the sales of the fruit, which leads to the local stores stocking it. 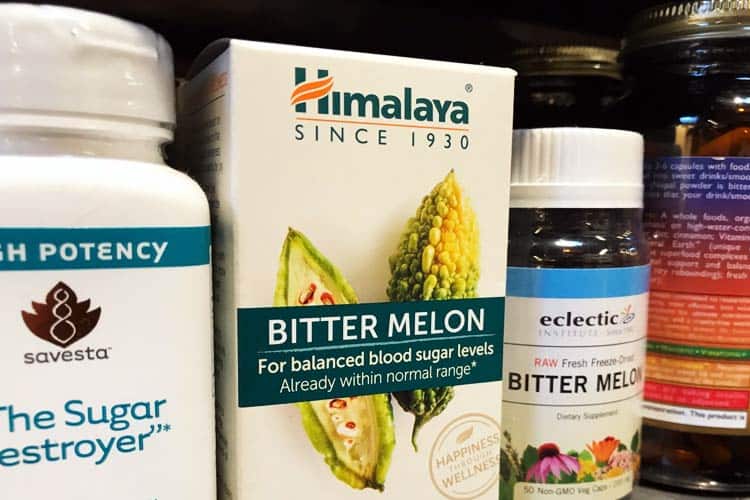 As a dietary supplement, Himalaya Herbal Healthcare sells organic bitter melon caplets. You can buy them on Amazon. Jarrow Formulas also sells the extract in tablets but it’s not organic.

While it may not work as well, perhaps the most unique form sold is the organic bitter melon tea by Buddha Teas. It comes in bleach-free tea bags.

Whether you eat it fresh or take a supplement, please know that it should not be used for the treatment of diabetes or any other disease. More research is needed. So far, evidence suggests the best use for it in the future may not be for its most touted benefit of blood sugar lowering. Rather, it may be the potentially protective benefits for diabetic complications like retinopathy of the eyes and heart disease risk.