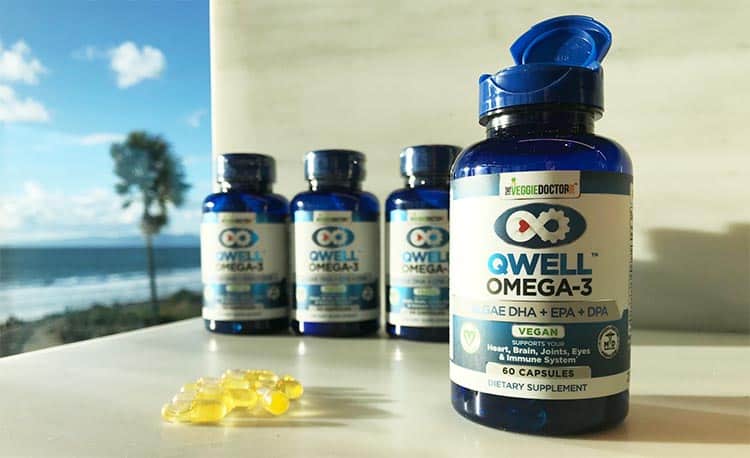 Given that the founder of Superfoodly has been vegan for 10+ years and before that, vegetarian for 20 years, he’s had an eye on fish oil alternatives for a very long time!

A decade ago, the brand Ovega-3 was just about the only option for plant-based.

Today, there are roughly a dozen.

Ovega-3 still remains a top seller, but we think that’s for legacy reasons. Out of buyers’ habits.

Because it seems they really haven’t done much in terms of R&D for the formulation.

With that, you also get some nasty additives like carrageenan, glycerin from palm oil, and caramel coloring.

Given the plethora of superior vegan DHA now on the market, we’ve moved on from this brand. You should too.

What is vegan DHA?

Omega 3 is an essential fatty acid because humans can’t create it. We must obtain it from diet.

For vegetarians and vegans, they get that from alpha-linolenic acid (ALA). Flax and chia are potent sources, among many others.

Our bodies convert ALA to EPA and then DHA.

For health benefits, our bodies need EPA and better yet, DHA. Without conversion, ALA is not useful for us.

As you can imagine, the conversion process of say, 1,000 mg of ALA doesn’t equal 1,000 mg of EPA and DHA. Not even close. Only a tiny fraction ends up in the forms needed.

This is why you should supplement with DHA vegan supplements. It’s a more guaranteed way to get the benefit of omega 3s in your diet.

Plant-based supplement containing EPA and DHA are made from marine microalgae. It is the only potent natural food source of vegan DHA. Land-based plants don’t make it abundantly. Potent animal-based sources, like fish, get it from microalgae, too.

Is it as good as fish oil?

Fish absorb industrial pollutants like PCBs, PBDEs, and heavy metals like mercury, lead, and cadmium from the water and food they eat. Worse yet, once this bad stuff goes into their bodies, it doesn’t really come out.

This bioaccumulation is compounded up the food chain.

Big fish eat little fish. Those little fish have concentrated amounts of these toxins. When the big fish eat them, they are basically eating all the pollutants that the smaller fish ate in their lifetime! (1) (2) (3)

In short, why would you want to take a DHA supplement that is fish-based, when you can go straight to the source – the microalgae that made it?

In addition to Ovega-3, other vegan omega 3 supplement brands include Qwell, Deva, Testa, Nested Naturals, Nordic Naturals, Nature’s Way, and Garden of Life. Almost all of these brands contain carrageenan. 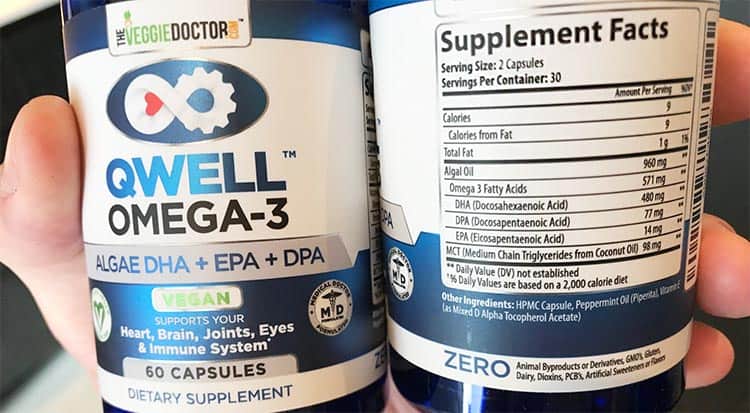 Qwell is the best plant-based DHA EPA supplement because it is carrageenan-free and does not contain sorbitol, glycerin, or colorings. It’s also easier to swallow, since one serving is two small veggie capsules.

Every month, we buy it on Amazon’s Subscribe & Save.

To help you better understand exactly why Qwell is the best DHA supplement, we decided to do a Q&A with the founder, Al Flores, so he can explain it in his own words…

Q: The Veggie Doctor is a very focused supplement company, given that you guys only do omega 3 and liver support. Regarding the former, can you tell us why you chose to pursue that?

A: That is a great question!  I’m a physical therapist and treat patients day in and day out.  About 5 years ago, I noticed that I was lacking energy, experiencing brain fog, often getting sick, and suffering from achy joints.  I also noticed that some patients would rehab well and some wouldn’t, so I started to look at all of these symptoms and ran across a Time Magazine article called “The Secret Killer – The surprising link between INFLAMMATION and HEART ATTACKS, CANCER, ALZHEIMER’S and other diseases.”

The article pointed out that there is substantial proof that shows chronic inflammation may be the engine that drives many of the most feared illnesses of middle and old age.

I also found another article written by Dr. Jonny Bowden stating that inflammation is the slow killer.  In that article, he points out that many of the diseases and aches and pains we experience come from the food we eat and our environment.

He recommends avoiding sugar, eating more vegetable, and taking omega 3 supplements.  He states omega 3s fatty acids are among the most anti-inflammatory substances on the planet and should be part of everyone’s supplement program. 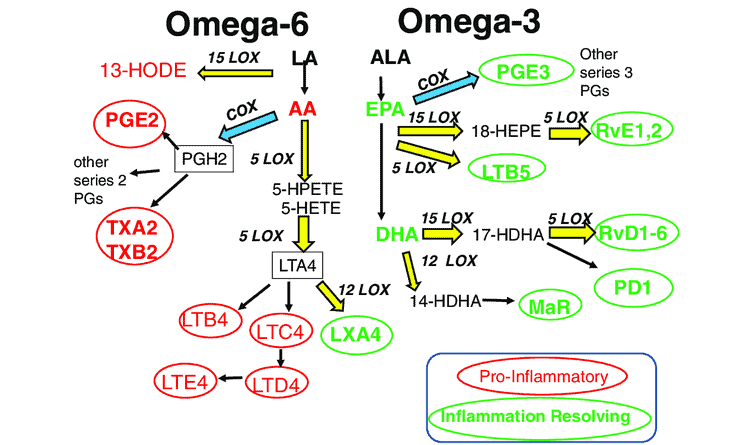 After reading this, I started researching and taking omega 3s in the form of fish oil, and I was recommending this to my patients.  I started taking fish-based omega 3s for almost a year, and was feeling better, but was finding that my body was having a hard time tolerating the fish oil and I often felt nauseous.

I tried at least 10 different brands and was still having the same issues.  It got to the point that I could not tolerate the fish oil anymore and I stopped taking it.

One day, a friend of mine asked me if I had ever tried a vegan version, which is made from algae (algal oil).  I was confused, because I thought omega 3s only came from fish.  I did not realize that fish, like humans, don’t produce their own omega 3, but the fish we eat get it from algae.  I tried it and found that I could tolerate it very well and was able to tolerate higher doses. 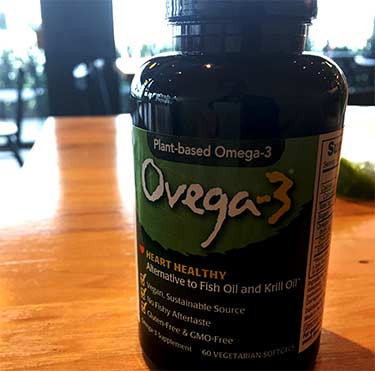 The problem was that there were only 2 or 3 brands and they all contained artificial sweeteners or colors or other ingredients that were inflammatory (carrageenan).

This is when my mission to create the purest and cleanest omega 3 in the world began!

It was obvious that omega 3s were helping me, and my patients based on their reviews, but many of the brands out there contained other ingredients that worked against the anti-inflammatory nature of the omega 3 fatty acids.  With very little money and no experience in formulation, manufacturing, marketing or sales, I started the laborious process of formulating a product and putting it out there in the marketplace.

It has been four extremely tough years, both mentally and financially, but the support and advice I receive from my customers has helped me persevere these tough times.  I have reformulated and improved my product 14 times!

My mission to create the cleanest and purest products is starting to expand into other products.

I recently released a liver cleanse product, which took me a year to research and formulate.  I refuse to put products out there just to make money.  If I did, I would have 15-20 products.  If I don’t feel that I have put my heart and soul into a product and wouldn’t recommend it to my family or friends, I won’t sell it.  Qwell™  vegan omega 3 and Red Mountain™ Liver Cleanse are passion projects for me that I am very proud of.

Q: For someone who is an omnivore or pescatarian, why should they choose a plant-based DHA supplement versus fish-derived?

A: The most talked about form of omega 3 is fish oil, BUT where do the fish get their omega 3s from?  It’s from algae.  Omega 3 is naturally produced by algae, not fish.  Like humans, fish get their omega 3s from the food they eat.  One of the highest sources of omega 3s is algae.  Qwell™ is also environmentally friendly.  Our omega 3 is extracted from cultivated algae, which makes it completely free of heavy metals, dioxins and PCB’s. 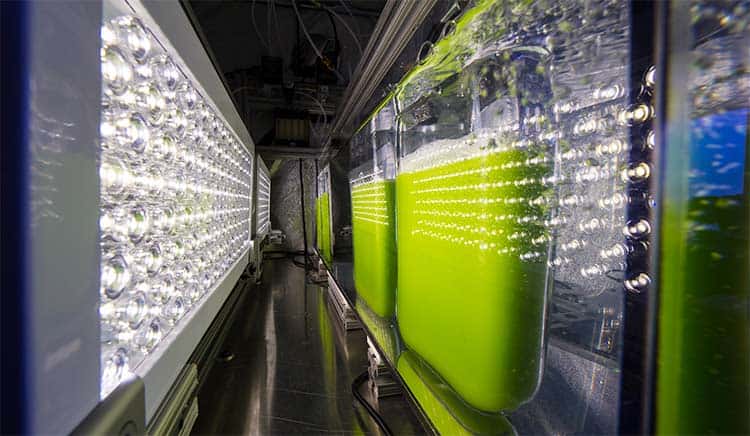 An example of how microalgae is cultivated indoors, in a device called a bioreactor. Photo by U.S. DOE (5)

Q: A decade ago there were only a couple vegan versions on the market, with Ovega 3 being the bestseller. Now there are at least a dozen brands. What specifically makes yours different than all of these competitors?

A:  That’s simple… Our customers and our mission to create the cleanest and purest omega 3 in the world.  Because of feedback from our customers, we have reformulated 14 times and have removed potentially harmful substances like carrageenan, artificial colors (caramel coloring), artificial sweeteners (sorbitol, glycerin) and chemicals (magnesium stearate).  We are also vegan certified.

Most recently, I have started working with an emergency room physician that has helped me improve my formulation.  We have one more ground-breaking reformulation that is currently under testing and could be released in 6-12 months!

Superfoodly: Thanks Al for sharing your story! Now you understand why we’ve chosen Qwell versus the competitors. Don’t take our word for it though, check out what users are saying about Qwell on Amazon.