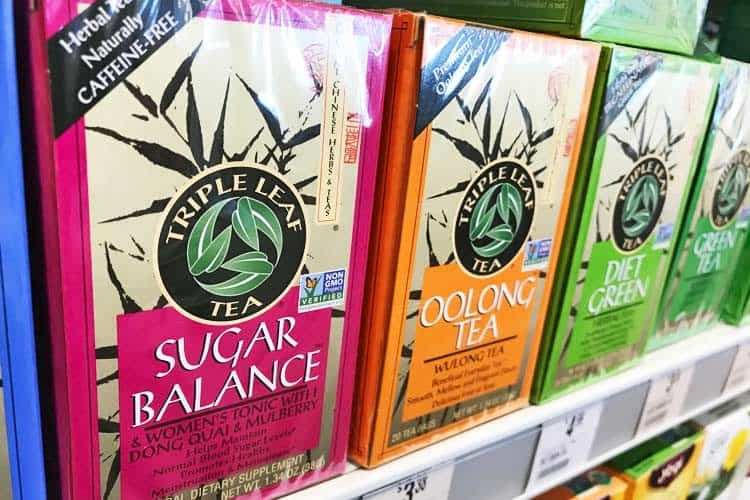 Of course, you already know that sweet tea is bad for blood glucose levels. Even if you don’t have type 1 or type 2 diabetes, spikes like that contribute to inflammation and accelerate the cellular aging process.

Not to mention, the empty calories make packing on pounds all the more easier.

What if you could drink something that had the opposite effect?

Not just sugar-free but rather, a beverage that might actually lower your blood sugar, instead of having a neutral or negative effect?

It’s true that those, as well as ginger, turmeric, and hibiscus tea, may help lower blood glucose and regulate insulin. However, the most robust scientific evidence is for the following three herbal teas.

They don’t have enough human clinical data to be considered “proven” for helping diabetics and/or blood sugar levels. Therefore, they are not intended to diagnose, treat, cure, or prevent any disease.

It’s not the fructose-rich berries from the tree, but rather the leaves of the white mulberry tree (Morus alba) and other types which might work.

To date, there are 5 clinical trials which have been published and peer-reviewed involving the mulberry plant for type 2 diabetes.

The active ingredient in the leaf is believed to be  1-deoxynojirimycin (DNJ). (4)

This following chart comes from a 2017 double-blinded and placebo-controlled trial involving 37 people who were given 125 to 500 mg of IminoNorm capsules. Those are a patented form of mulberry leaf extract.

After consuming 50g of a simple carb (maltodextrin) you can see how those taking mulberry leaf extract had a less pronounced spike during the 2 hours which followed.

Even before this and similar trials, it’s been reported that lower blood sugar is among the main mulberry leaf tea benefits. For generations, Traditional Chinese Medicine (TCM) has used San Zhi (mulberry twig) as an herbal treatment for diabetes. (5)

Even if the DNJ in the leaves and twigs work, obviously the efficacy of drinking a brewed beverage made from them would vary greatly, depending on source and strength.

While much more research is needed, mulberry leaf appears to be the best tea for blood sugar control based on the preliminary findings thus far.

The brand Triple Leaf, which is pictured atop this article, is probably the bestselling brand in America. However, it’s not our first choice because it’s an herbal blend with astragalus and schisandra berry. Both good, but they’re not known for blood sugar benefits.

If you want pure mulberry leaf, we like Ssanggye Tea, which is Korean brand. You can buy it on Amazon.

Among the herbal teas for blood sugar, cinnamon is one of the most touted. There are at least 6 blinded and well-designed clinical trials whose results suggest that cassia cinnamon powder/extract has a lowering effect on fasting blood glucose levels. (6)

Most likely it does. The spice contains a compound called methylhydroxychalcone polymer (MHCP). Based on the science, it mimics insulin in the human body. It appears to be good for lowering blood sugar immediately, as well as up to 12 hours after consumption. This benefit has been observed in both diabetics and non-diabetics.

Whether in the form of tea, capsules, or sprinkling it on your food, the problem with cinnamon supplementation is that is can be toxic to your liver.

Cinnamon contains a naturally occurring compound known as coumarin. Both human and animal studies confirm it is poisonous to the liver. Some animal research also reports it being bad for the kidneys.

The US government doesn’t regulate this source of coumarin but many countries do. In Germany, 0.1 mg of coumarin per kg of body weight is the tolerable daily intake (TDI). (7)

Since cassia cinnamon contains up to 1% coumarin content, it means that as little as a ¼ teaspoon per day may put you over that limit!

Cassia or Chinese cinnamon (Cinnamomum cassia) only became popular within the past several decades. The reason is due to its lower price and greater availability.

Ceylon cinnamon (Cinnamomum verum) is known as true cinnamon. Grown in Sri Lanka, it has a milder flavor with less heat.

The best solution may be to use a different type.

Unfortunately, almost all of the diabetes treatment trials used cassia, not Ceylon. It remains to be seen whether or not Ceylon offers the same suspected blood sugar lowering benefit.

That said, both are types of cinnamon (Cinnamomum plant genus) and both contain MHCP, which is the compound believed to be responsible for the benefit.

Even if it doesn’t work as well, because it contains up to 250x less coumarin, the best cinnamon tea for blood sugar control will be that which is made using Ceylon. You can drink it on a daily or regular basis, without worrying about coumarin exposure.

The good news with both types is that they’re very high in antioxidants, which may help offset potential side effects on the liver.

On Amazon you can buy Ceylon cinnamon tea bags, which are convenient for work and on-the-go.

While at home, you might get more bang for your buck by simply stirring in a ¼ teaspoon of the spice powder into a mug of hot water. This is the brand of Ceylon we buy in bulk.

It’s obscure to the Western world but common in India, as part of their Ayurvedic medicine. The name gymnema comes from the scientific name of the plant, which is Gymnema sylvestre. 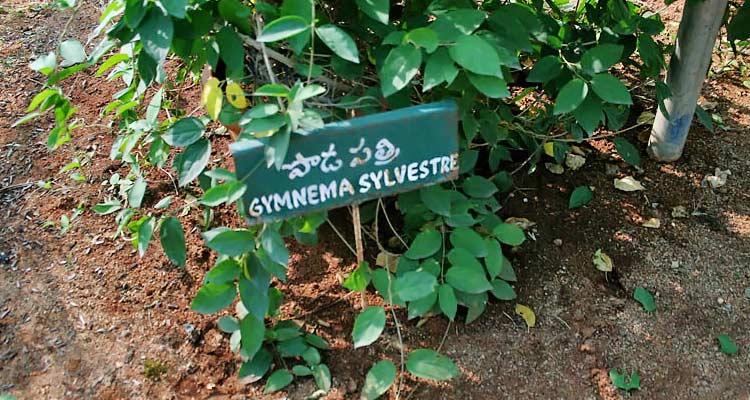 Why? Because after chewing the leaves, the unique gymnemic acids cause your tongue to not taste sweetness.

Powdered donuts will literally taste like chalk, no joke!

The fact that it discourages you from eating sugary foods isn’t the only reason gymnema tea is good for blood sugar. Research also suggests the compounds in it have a hypoglycemic effect.

Using leaf extract, clinical trials have been conducted on both type 1 and type 2 diabetics.

The earliest was published in 1990 and involved 27 children and adults with type 1 diabetes. After taking a 400 mg daily dosage of the extract, eventually the patients had to have their prescription insulin treatments decreased:

“…the GS4 [Gymnema sylvestre] treated patients developed hypoglycemic [low blood sugar] episodes and their insulin dose was reduced by 10 units at a time.”

That’s quite remarkable considering that the 37 diabetics in the control group – who didn’t receive the treatment – experienced no such thing during that time. (9)

In addition to diabetes, Gymnema sylvestre supplements are often marketed for weight loss, since they can deter the eating of sweets.

For tea, not many Western brands sell it. The brand Buddha Teas has organic gymnema tea they sell in bleach-free bags. You can get it on Amazon.

Hibiscus tea has more antioxidants than matcha, ginger can help with upset stomach, and turmeric battles inflammation. When it comes to blood sugar tea, the best based on research are gymnema, cinnamon, and mulberry leaf.

Claims that they are teas for diabetes prevention are an exaggeration, as they haven’t been studied for preventing the disease.

There is a fair amount of evidence suggest they might help diabetics and non-diabetics alike, in achieving milder blood sugar spikes after consuming carbs.