Best Food & Diet For Asthma Patients, Based On Swedish Study

What should be included in an asthma management plan?

Under the guidance of a doctor, ideally a pulmonologist, we are prescribed inhalers and other medications. We are told to identify triggers for asthma attacks and avoid them when possible. For many, that involves limiting physical activities which are strenuous on the lungs.

While the exact cause of asthma is unknown, to help manage symptoms, many people find that environmental allergens like pollen, and furry animals like cats, can act as triggers. As such, antihistamines and allergy treatments typically go hand-in-hand with inhalers in managing this chronic lung disease.

Compared to those, foods to avoid with asthma typically take a backseat during doctor-patient discussions.

That’s too bad, because there is compelling scientific evidence to suggest that the best diet for asthma is not the typical Western diet.

Given their trending status among health-oriented individuals, a paleo or ketogenic diet for asthma has been promoted by some pundits. Yet there is not really any good evidence to back them up. Rather, it seems that people are just casually recommending keto diets (or whatever the latest fad is) as a magical cure for asthma and everything else.

In fact, other scientific research hints that high-fat diets might make your asthma worse, if you’re relying on fats from meat and dairy.

Prostaglandins are fatty compounds that can have hormone-like effects in the body. (1)

Leukotrienes are inflammatory molecules released by mast cells during an asthma attack.

For many decades now, scientists have known that prostaglandins and leukotrienes play an important role in asthma and lung inflammation. (2)

Arachidonic acid is a fat which primarily comes from eating chicken, beef, pork, and fish. (3) 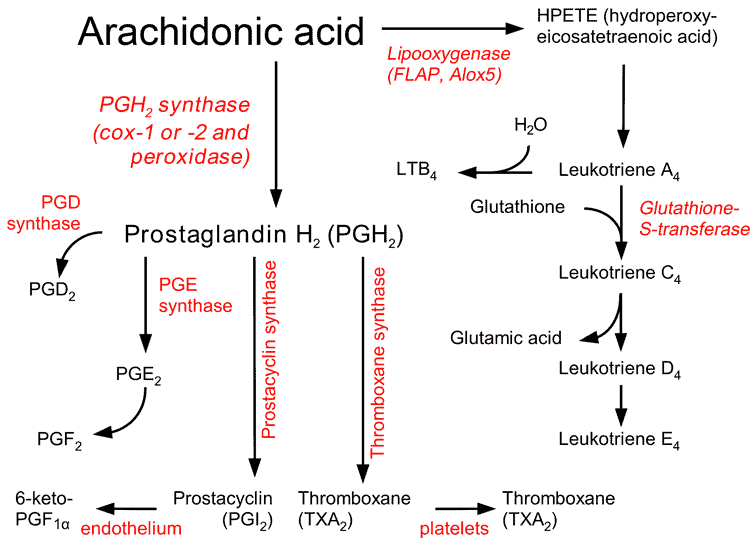 The digestion of arachidonic acid creates leukotrienes and the “bad” prostaglandins. This happens as enzymes breakdown this fatty acid. (4)

While some other prostaglandins are good, those created by arachidonic acid are bad. They have an inflammatory effect in the body. This is clearly proven through their effect on cyclooxygenase (COX) enzymes. (5)

Higher expression of COX enzymes = inflammation. That’s why some prescription drugs for arthritis and joint pain, like Celebrex, specifically work by being a COX-2 inhibitor. They reduce the expression of those enzymes.

On the flip side, there are “good” prostaglandins, such as those which are created from linoleic acid (LA) and gamma-linolenic acid (GLA).

The highest concentration of those fats is found in plant-based foods, such as seeds and nuts. That includes their oils.

PGE1 is also synthetically created for use as life-saving medicine. In fact it’s on the World Health Organization’s List of Essential Medicines, which are considered to be the most effective and safe medicines needed for healthcare. (7)

Better known under its trade name alprostadil, PGE1 treatment is given through IV injection and suppositories for labor induction in pregnant women, congenital heart disease in babies, and erectile dysfunction in men, among other uses.

In the 90’s, there were double-blinded trials which confirmed that the bronchodilator effects of prostaglandins E1 and E2 (PGE1, PGE2) won’t work well when inhaled. That’s probably why you rarely hear about them in relation to asthma. (8)

After all, if you can’t patent something and turn it into a $200 inhaler, why promote it?

Plus, the half-life of PGE1 and PGE2 is very short after it hits the bloodstream. Unless a time-released version could be developed, this makes it an ineffective treatment candidate for asthma, because it would have to constantly be taken. (9)

Interestingly enough, one natural time-released way to get PGE1 and PGE2 levels higher in the blood is through the digestion of food. It’s a slow process.

Can being vegan help with asthma?

The higher production of good prostaglandins and leukotrienes, and lower production of the inflammatory types which come from meat and dairy, are just a couple reasons why a plant-based diet may help asthma. There are numerous anti-inflammatory benefits of high vegetable and fruit intake, particular those which are raw.

We could tell you about the founder of Superfoodly who has been a severe asthmatic since infancy.

As a baby and child, he depended on nebulizer treatments several times per day and night, as well as countless ER and hospital stays for the severe attacks. In addition to pollen and pet dander, running any type of distance was out of the question. It would have literally killed him.

Today, he runs 5+ miles per workout, multiple times per week. He laps even the hardcore athletes every Saturday morning, during a 90 minute non-stop regimen of running up and down a famous set of steps in Los Angeles.

While he does still take a Singulair (montelukast sodium) tablet once per day, his Qvar and albuterol inhalers are rarely used. As little as a couple times per week. Nebulizer treatments are a thing of distant memory.

To make matters more complicated, this is with having an 8 inch metal plate connecting his pelvis, intermarrow rods in his femur and tibia, dozens of screws below the waist, and a left knee cap which hardly has any cartilage left due to reconstructive surgeries.

Such strenuous workouts were previously not possible. Severe asthma and chronic inflammation from his high school auto accident limited his lifestyle.

That all changed after going plant-based. He’s been a strict vegan now for 10 years and counting.

Of course, a review or testimonial by one person is great, but what about a clinical study?

You won’t hear pulmonologists or allergists talking about it, probably because they don’t know it exists. But there was a study done in Sweden in the 80’s involving severe asthmatics. It was an evaluation of what happened to them when placed on a strict plant-based diet for one full year. 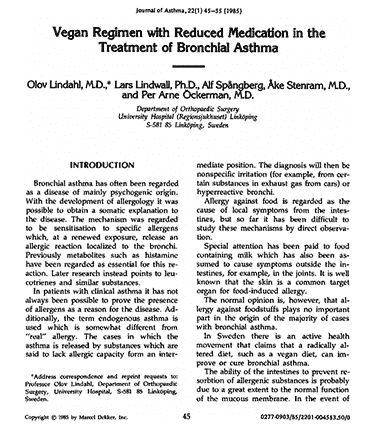 University Hospital in Linkoping, Sweden conducted a 1 year study. Ranging from 25 to 70 years old, there were a total of 35 participants:

In short, these were not mild or moderate cases. On average, we are talking about very severe asthmatics. The medical journal describes them as:

“These patients represented a fairly advanced type of asthmatic disease and would normally have been too difficult and too staff demanding to be taken care of at a health center.”

Something unique about this study is they went beyond doing testing at baseline (day 0). The researchers gave tests and conducted surveys on asthma symptoms and overall health, beginning up to 6 months before the vegan diet study even started.

Day 1 of the new diet started with in-patient admission for 12 days, at a healthcare facility. While there, they received lessons and training on what to eat and which foods to avoid. A 7-day juice fast was given, at least for those who medically could do so.

To ensure that environmental results didn’t influence results, these patients were told:

When possible, they were encouraged to not use their medicines, or use them less. There were a few exceptions, such as for diabetics, who had to keep using their insulin of course.

To make sure they were following through, after the first 4 months the patients had another 12-day stay at the in-patient facility. This was done again after another 4 months (8 months from start) and finally again at the end of the 12 months.

Of the 35 participants, 21 completed the program successfully. Others were ineligible because they dropped out, couldn’t stick to the diet, or had a health situation prohibiting them from doing so.

For example, one women became pregnant. Another was determined to have severe eczema that caused breathing problems, which was misdiagnosed as asthma by prior doctors.

A related interesting tidbit about eczema; recent studies have concluded that children with severe atopic dermatitis go on to develop asthma as adults 50-70% of the time. Clearly there’s a relation. (10)

For those who dropped out because they couldn’t stick to the diet, they did so early on; 9 people quit before the first 2 months were up.

For those who followed the strict vegan diet for 12 months, there was a highly statistically significant (p<0.001) improvement in asthmatic symptoms; 71% after 4 months and 92% after 1 year. Both the number and severity of attacks was significantly reduced. Overall, they could breathe easier and do physical activities more freely.

The results were so profound that quotes like “had a new life” were used by participants, in comparison to their old omnivorous diet.

Metabolic measurements of infections and allergic reactions were also better. Immunoglobulin E (IgE) are antibodies which are signs of the immune system overreacting to allergens. IgE levels improved significantly.

While a vegan diet cannot cure asthma, one patient on the plant-based regimen was classified as “completely recovered” from asthmatic attacks and symptoms. They had to stay on the diet the full 12 months to achieve this, as the same was not achieved by month 4.

For those who completed the study successfully, side effects of a vegan diet for asthma appear to be quite positive… 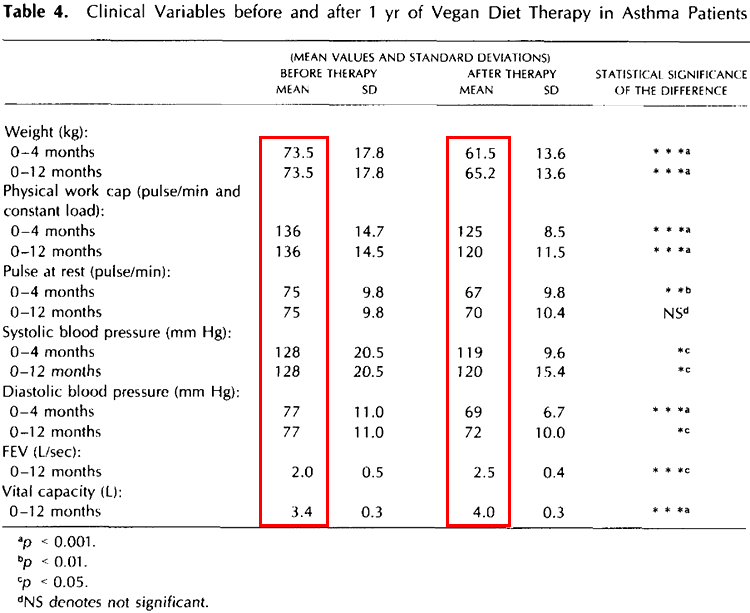 Some highlights from these and other before/after measurements:

Levels of iron, calcium, potassium, liver enzymes, kidney function, and other metabolic parameters were all healthy and normal.

What are the best foods for asthma?

Aside from avoiding all red and white meat, fish, eggs, and dairy, study results suggest a meal plan emphasizing raw vegetables and fruits is best for asthma patients. Ideally organic, because reactions were seen from some additives/pesticides found in non-organic foods. Vegan hot dishes in the diet are okay, but not to exceed the raw food intake amount. 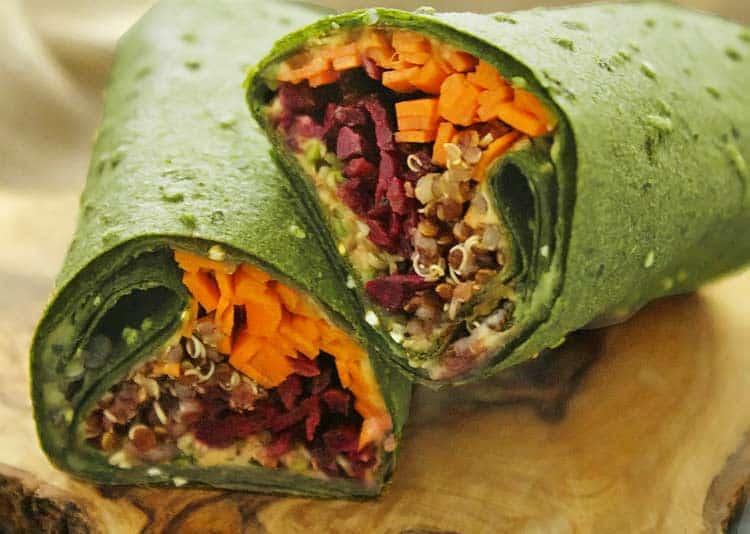 While not specifically a gluten free vegan diet, cereal grains were believed to be possibly bad for asthmatic inflammation. At least for some people. Instead, GF grain alternatives like buckwheat and millet were encouraged.

Fruits said to be good for asthma focus on antioxidant-rich berries; blueberries, raspberries, strawberries, black currants, gooseberries, and cloudberries. The latter only grows in northern Europe. Apples, citrus, plums, and pears are good, too.

The benefit of raw vegetables and fruits for asthma is that their phytonutrients remain intact. Vitamin C is destroyed by heat, as are many of the anti-inflammatory compounds.

Vitamin B12 and D were permitted to be used, but no other supplements were allowed. (11)

Published in 1985, this study out of Sweden was clearly ahead of its time. Back when even lacto-vegetarians were uncommon and the word vegan didn’t yet exist. The gluten free diet going mainstream wasn’t going to happen for another 20+ years.

If you need more science-based evidence to compel you to give this diet a try, The China Study will provide you more than enough.