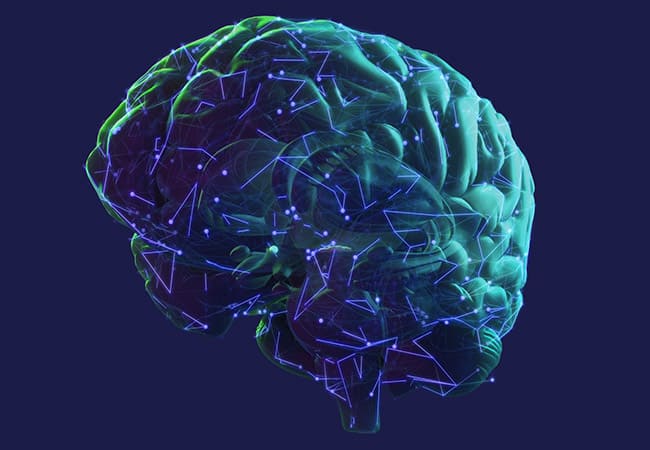 The disease results in the loss of neurons or nerve cells that contain dopamine in the part of the brain that controls movement. This loss of neurons results in decreased speech and motor skills, and over time, can lead to death. There is no known cure for Parkinson’s, and few alternative treatments.

The exact cause of Parkinson’s remains unknown although several factors have been identified that are believed to be linked to the disease:

Approximately 15% of sufferers have a family history of Parkinson’s disease, but it has not been proven whether this is due to genetic or environmental factors. Environmental factors such as toxins may play a part in the neuron’s ability to produce dopamine.

Another theory suggests that neurons die because of the aging process or due to exposure to free radicals. The following factors increase your risk of Parkinson’s disease; aging, gender (male), high stress levels, head trauma, exposure to environmental toxins (pesticides) and a high fat diet containing trans fats.

One factor that stands out as decreasing your risk of Parkinson’s is a diet high in antioxidants! 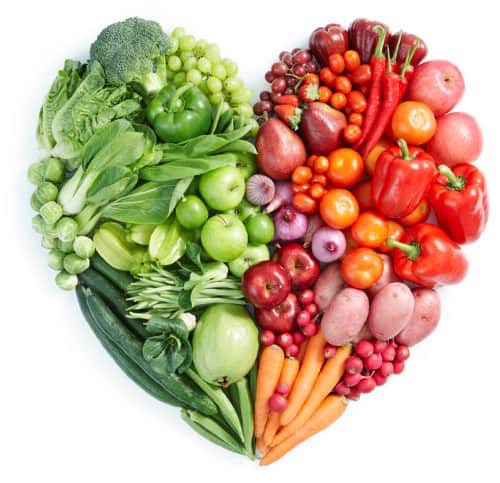 As there is no known cure for Parkinson’s, treatments are targeted at managing the symptoms of the disease. The medication Levodopa is often the most effective treatment for symptoms.

This prescription medication converts to dopamine once it reaches the brain and reduces many Parkinson’s symptoms. Unfortunately, the effectiveness of Levodopa decreases over time and causes unpleasant side effects like nausea and vomiting.

While you cannot control genetic risk factors, you CAN control environmental risk factors and the quality of the foods you eat. Based on the risk factors above, you need a “clean” low fat diet rich in healthy antioxidants to reduce your risks or help control your symptoms.

A healthy balanced diet will ensure that you maintain a healthy weight and energy level. Energy is one of the biggest requirements when suffering from Parkinson’s disease because the muscles struggle to manage the extra demands put on them, a lack of energy would result in many muscle movements becoming even further impaired.

If you are prescribed Levodopa, your diet should also be low in protein. Clinical studies have found that a low protein diet enhances the action of L-dopa. It has been suggested that you should limit your protein intake to 7 grams until your evening meal. This simple approach can reduce tremors and other symptoms of Parkinson’s disease during work hours.

Antioxidants, especially Vitamins E and C, may help prevent Parkinson’s disease and may also offer therapeutic effects as well. In one study, patients with early Parkinson’s disease were given 3,000 mg of Vitamin C and 3,200 IU of Vitamin E each day for a period of seven years. Although all patients eventually required drug treatment, the patients receiving the vitamins were able to delay the need for medication for up to three years. These results are quite promising.

Inflammation increases your risk for and symptoms of Parkinson’s. Sugar, dairy and processed foods are the major contributors to inflammation. An anti-inflammatory diet focuses on reducing or removing sugar from your diet and that includes overly processed carbs like white bread, cereal, white rice, crackers and pasta. The anti-inflammatory diet is built on a base of fresh fruits and vegetables, whole grains, beans and legumes, fresh fish and lean meat.

Here are three of the best diet options that meet the requirements listed above and may reduce your risks of Parkinson’s or help in your battle with the disease: 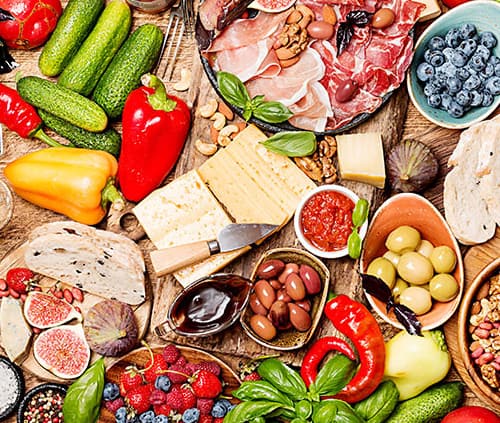 Studies suggest eating a Mediterranean diet can reduce your risk of neurodegenerative disease, including Parkinson’s. For many years, researchers have noted that people who live around the Mediterranean Sea and follow a traditional Mediterranean Diet have lower incidences of Western world diseases such as heart disease, stroke, high cholesterol, and type 2 diabetes.

The Mediterranean diet contains many healthy, natural foods rich in antioxidants including grains, vegetables, dried beans, olive oil, garlic, fresh herbs, seafood and a variety of fruits. The Mediterranean diet has also been identified as one of the best diets for a longer life expectancy thanks to its limited amount of red meat, sugar and processed foods.

Following a whole-food plant-based diet, rich in a variety of fresh fruits and vegetables and high in fiber can help reduce some Parkinson’s symptoms. One study suggests a vegan diet containing NO animal products could be “therapeutically beneficial in Parkinson’s by slowing the loss of surviving dopaminergic neurons, thus retarding progression of the disease…vegan diets could also be helpful to Parkinson’s patients by promoting vascular health and aiding blood-brain barrier transport of L-dopa.”

You can choose a plant-based diet without the extreme restrictions of a vegan diet by simply eating at least two meals packed with veggies every day, and snacking on fruits and vegetables in between, the quality of your health and your life will drastically improve.

The Ketogenic Diet was developed to prevent seizures in epileptic patients, but can also offer symptom relief and protect the nerves in neurodegenerative conditions like Alzheimer’s and Parkinson’s disease.

The Ketogenic or Keto Diet involves going long periods (30-60 days) on extremely low (almost no) carbohydrates and increasing your dietary fats to an extremely high level (60-70%) of your daily macronutrient intake.

With no carbs available for energy, your body is forced to burn fats (both dietary and stored) as your energy source. The fat burning process produces ketones, a fatty substance that can repair damaged neurons and improve nerve impulses in your brain. The ketogenic diet may improve motor function and increase nerve cell survival in neurodegenerative diseases including Parkinson’s.

Keto is not for everyone, it is a very restrictive diet and not easy to follow and may lead to vitamin and mineral deficiencies over a long period of time.

Regardless of the diet you choose, here are a few dietary rules you should follow to support your health and manage your Parkinson’s symptoms:

A fresh tomato on your plate is healthier than a tomato from a can. An orange is healthier than bottled orange juice and an apple is a better choice than commercial apple juice. Eat foods in their original, natural state. Eat them raw when possible and steam your vegetables.

NO diet sodas, they contain aspartame and artificial (chemical) sweeteners, aspartame lowers the dopamine level in your brain. Sodas contain sodium benzoate which has been linked to dopamine neuron damage.

Products that contain sodium benzoate release dangerous benzene-like molecules into your bloodstream when metabolized. There is growing research in the link between diet soda and Parkinson’s disease.

Dairy products contain lactose (milk sugar) and increase the possibility of bloating and systemic inflammation. Dairy products have also been shown to impact the oxidation levels in your brain, making your Parkinson’s symptoms worse.

Gluten (bread, pasta, pizza) increases systemic inflammation and may even be dangerous if you are sensitive to gluten. Celiac disease, a severe allergy to gluten produces symptoms almost identical to Parkinson’s disease.

One symptom of Parkinson’s disease is tremors and twitches which are made worse by increased levels of caffeine from coffee, cola or energy drinks. A small amount of coffee may improve brain function, but too much will increase your Parkinson’s symptoms.

An additional symptom of the disease is periods of daytime sleepiness. Alcohol may make your daytime sleepiness worse so be careful about the timing if you choose to drink and do not drink if driving – your resistance to the effects of alcohol is lower.

If you suffer from Parkinson’s tremors, you are burning more calories and may need to snack to maintain your energy levels. But avoid sugary snacks when possible as they cause a sugar spike followed by an equal insulin spike.

Your cravings for sugar will be strong, as sugar “connects” with dopamine receptors in your brain. The disease and your medications are manipulating your dopamine levels – sugar does not help this process.

Drink a minimum of eight glasses of CLEAN filtered water each day. To prevent your risk for or improve your symptoms of Parkinson’s disease, you must reduce your toxic load.

Clean filtered water prevents drinking new toxins as you flush away those toxins trapped in your liver and kidneys. Filtered water is proven cleaner and safer than bottled water which often contains hydrocarbon compound residue from the plastic bottle.

There are a few supplements (specifically vitamins) that may improve Parkinson’s symptoms but use supplements sparingly as they may interfere with your prescription medications. Start with 3,000 mg of Vitamin C and 3,200 IU of Vitamin E each day for their antioxidant properties.

Vitamin B6 (pyridoxine) has been associated with lower rates of Parkinson’s so many patients take 100 milligrams each day. If you take an over the counter multivitamin, be very careful and check the ingredients for manganese which has been shown to block dopamine.

If you’re looking for gift ideas for parkinson’s sufferers then you could get them a book explaining these diets and recipes.