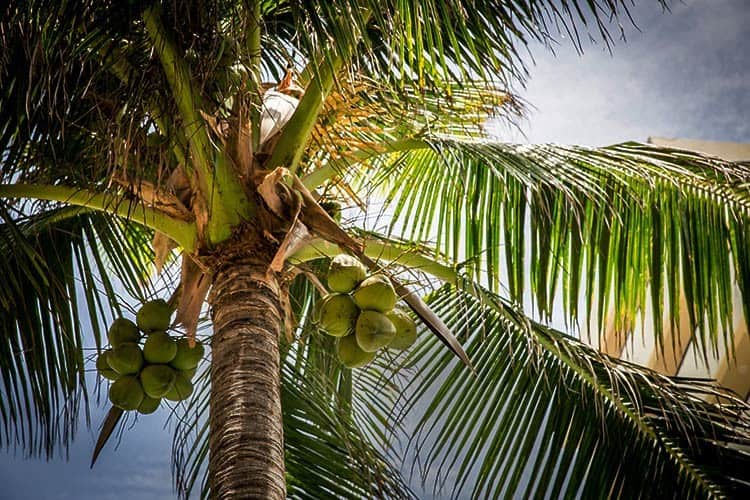 It has been claimed on Bragg’s bottle – but not verified – that in the 4th century BC, the famous Greek physician Hippocrates advised his patients to take an apple cider vinegar mixture for its natural benefits of detox, cleansing, healing, and energizing. (1)

Today, it is known as the healthiest vinegar to use for cooking, salad dressings, and just about everything else. And in fact, you can say that’s a fair assessment since raw apple cider vinegar (ACV) is one of the few which is alkalizing to your body – bringing up its pH, which is good for you. Balsamic, white, and red wine vinegar do the opposite; they’re acid-forming, which is bad for you.

No wonder so many people buy Bragg’s by the gallon.

Is coconut vinegar alkaline or acidic like the others? As it turns out that – just like the apple cider variety – coconut is alkalizing to your body.

That puts these two in a class of their own. However, the benefits and nutritional facts for each are quite different.

Before we compare apples to apples (no pun intended) we need to make sure we’re all talking about the same type of coconut vinegar.

The “sap” version is dramatically healthier. It is made using the sap from mature coconut blossoms, which are nutritionally rich in vitamins, minerals, amino acids, probiotics, and beneficial enzymes. It’s aged for 8+ months until it ends up in a bottle.

The “water” version offers far fewer nutritional benefits. It’s made with coconut water and it’s not even pure since there are added ingredients, such as cane sugar or even apple cider vinegar, in order to jump start the fermentation process. In as little as 2 weeks, it will end up in a bottle.

For the sake of this comparison, we’re talking about the healthier coconut sap vinegar. 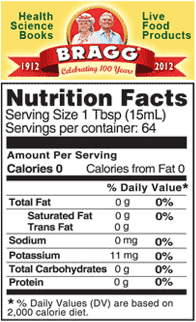 What you will find on both is a bunch of zeros for almost all of the fields.

Of course, this does not mean they’re lacking nutrition. Rather, it’s just lacking at what’s mandated by the nutrition facts label. As you know, those labels only address the utmost basics and don’t address phytonutrients whatsoever.

And the ingredients? Here they are…

Do they have sulfites? Often times, vinegars have quite a bit of sulfites and people with a sulfite allergy need (or prefer) to avoid them. The FDA requires manufacturers to disclose on processed product labels if sulfites were used. The Coconut Secrets and Braggs labels do not say anything about sulfites, though we would advise caution and further research before using if you have a sulfite sensitivity.

Are they gluten free? Yes, both are.

Are they vegan? Yes, both are.

Do they contain yeast? Braggs does not ferment with yeast. As far as Coconut Secrets is concerned, their website is silent on the topic, though we have not been able to locate any information which suggests they use it. Therefore, coconut sap vinegar most likely does not contain yeast. For those with Candida overgrowth, Coconut Secrets is said to be Candida diet compliant.

Beyond what’s listed in those labels, neither Braggs nor Coconut Secrets provide the amino acid profiles or the complete vitamin and mineral content.

The closest thing we have is this table from Coconut Secrets which compares fresh sap and fresh apples: 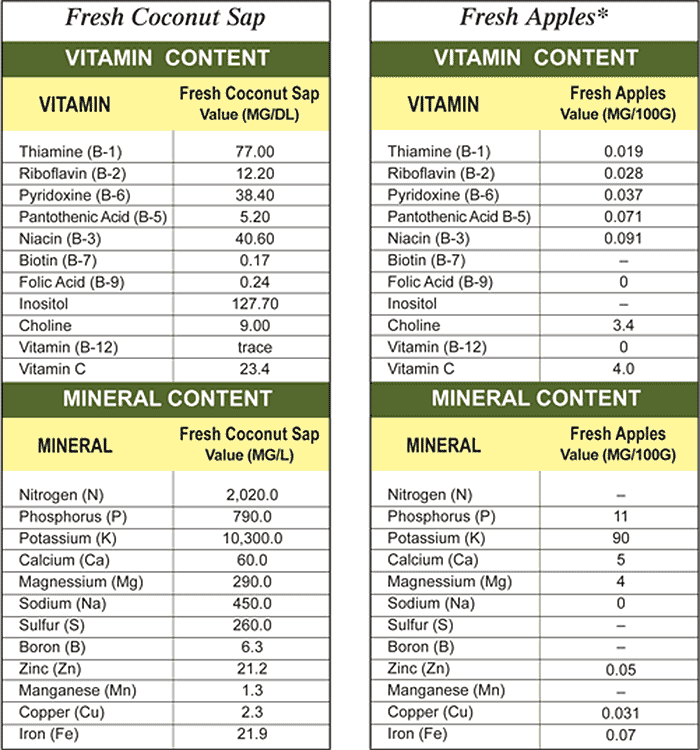 Upon first glance, obviously the table on the left appears to be the winner. Though it’s important to remember these are not for the vinegars, but rather the fresh sap and apples they are made from.

You can imagine the concentrations would likely change in the finished products. For example, the table on the right is for 100 grams of fresh apples. After those are prepped and fermented, presumably the concentration of apples in the bottle of ACV would be greater than the fresh fruit (on an equal weight to weight basis).

Chances are, you aren’t consuming 1/10th of a liter at a time!

1 decileter is equal to 6.67 tablespoons (remember the serving size on the labels is 1 tablespoon).

Aminos, the building blocks of protein

Does apple cider vinegar have amino acids? Yes, 16 of them.

The amino acid profile of coconut vinegar is 17 in total.

They don’t publish the AA profiles for the finished products, but for the raw ingredients they are made with, this is how they compare… 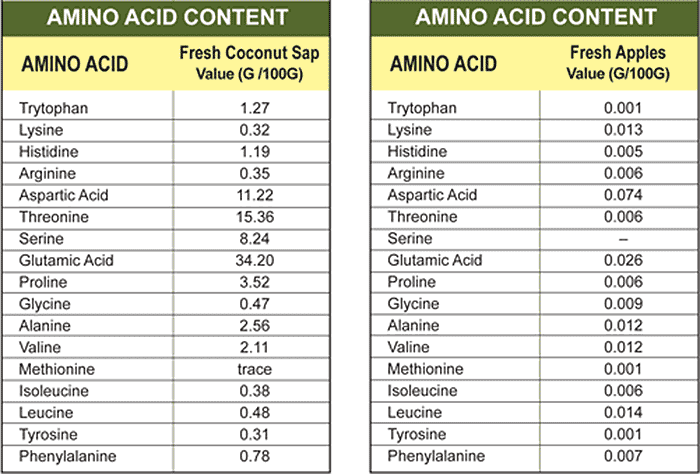 Unlike vitamins and other phytonutrients which are often destroyed by heat and processing, proteins/amino acids hold up quite well. For this reason, we can assume that the amino acid content in the coconut and apple cider vinegars resembles the above in terms of proportion. The exact amounts are unknown since the above tables are for raw ingredients rather than finished products.

It may seem like ACV is deficient in branched chain amino acids, but consider the fact that both have low amounts, relative to your dietary needs.

Your average medium apple weighs 182 grams. That means you would need to eat about 35 apples to get your RDA of lysine.

So really, look at the aminos as icing on the cake, not the sole benefit of consuming these.

Unless you plan on consuming 56 tablespoons of Coconut Secret – or 1379 of Braggs – per day to get your RDA of lysine!

Other health benefits, if any? 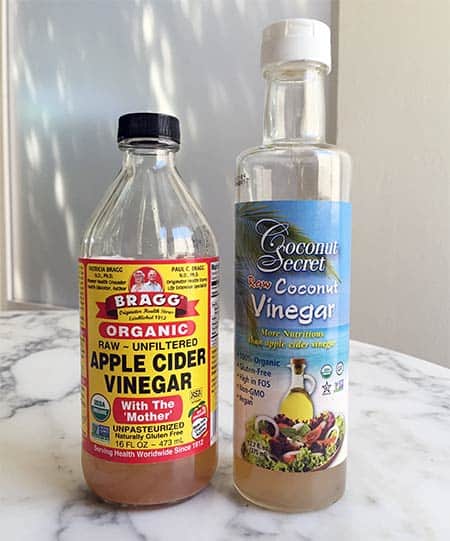 As you are most likely aware, there have been many claims made about apple cider vinegar. Weight loss benefits are one of the most touted and indeed, there is research which suggests consuming vinegar as part of a high carb meal may help people feel more full and therefore consume less calories. (3) (4)

Plus, let’s not forget that both of these vinegars are fat-free since they don’t contain oil. Not that fat makes you fat, but excess is bad because it’s so calorically dense.

Perhaps the widest body of research involving ACV is its effect on elevated blood sugar levels in those with type 2 diabetes. In one study, during the 60 minutes following a meal, insulin sensitivity increased 19% in the group who consumed a mixture of 20 grams of vinegar, 40 grams of water, and 1 tsp saccharine. (5)

There are studies which suggest vinegar (though not always specific to ACV) might offer benefits related to cancer. (6) (7)

Rat studies have suggested possible, though not proven, effects of lowering cholesterol and triglyceride levels. (8) (9)

But what are the raw coconut sap vinegar health benefits, if any?

No one knows. It may – or may not – produce similar results in studies. As its popularity continues to grow, we would expect to see research done on its possible health benefits and side effects in the coming years and decades. If you haven’t seen it for sale, you can get Coconut Secrets on Amazon.

These statements have not been evaluated by the Food and Drug Administration. This product is not intended to diagnose, treat, cure, or prevent any disease.
472
SHARES
FacebookTwitter