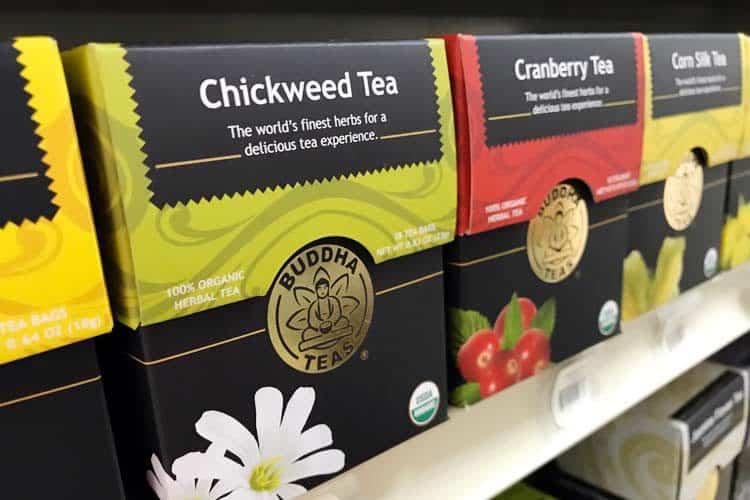 The word “weed” in the name should clue you in… the Stellaria genus of flowering plants is not always desired.

Also known as the common chickweed, chickenwort, and winterweed, gardeners often despise it because it’s hard to control.

As an herb, chickweed is used for culinary purposes. The younger shoots are considered gourmet greens for salad. Purported medicinal uses include skin conditions such as psoriasis, acne, and lipomas when applied topically in the form of a tincture of salve. When ingested, some believe it helps with stomach and bowel problems, such as constipation, as well as lung and breathing problems related to asthma and allergies.

To be clear, all of alternative medicinal uses are unproven. This plant should not be used to diagnose, treat, cure, or prevent any disease.

What follows is the preliminary research on it so far which suggests that some of the chickweed uses might be rooted in science, though more will need to be done to find out.

Published in 2017, a Shanghai university came out with a study using mice. They were placed on a carefully crafted high-fat diet. In addition, some were given a daily dosage of chickweed root from the species Stellaria dichotoma.

For those given the herbal extract, their weight gain was said to be “significantly inhibited.” They believe the reason is because it had a positive effect on a genes related to metabolism.

This change could even be seen on the cellular level. These three photos, taken with a microscope, show how the white adipose fat tissue in the HF+RSE group (high fat with chickweed) look more comparable to the regular diet. (1)

There are a handful of other studies on this plant which also suggest an anti-obesity advantage. (2) (3)

In the same study mentioned above, blood glucose readings were taken 15, 30, 60, and 90 minutes after the injection of glucose.

You can see how the mice getting the chickweed tincture had lower blood sugar when compared to the high-fat diet group, despite their intake of carbs (sugars) and other macronutrients being identical.

If this is happening in humans, it might be a beneficial tea for people with diabetes.  Especially type 2 diabetics who are likely overweight.

A research institute out of Russia reports that there is a gene in chickweed which is a “novel strong promoter of antimicrobial peptides.” The species researched was Stellaria media, which happens to be the most common type used for making chickweed tea. (4)

Another study published by the same group in Moscow reported similar for fungal growth. They report what’s called a chitin-binding site, which interfered with the tested fungi growing. (6)

Lab research out of China reports there is a unique protein found in chickweed which demonstrates antiviral activity against HSV-2 in lab experiments. That’s the virus which causes genital herpes. (7)

There are at least 13 unique alkaloids in the chickweed plant which exhibit anti-inflammatory activity in lab research, be inhibiting nitric oxide (NO) production.

Nitric oxide is a major mediator and regulator of the body’s inflammatory response.

In a purely theoretical sense, this may be why some asthmatics report better breathing when drinking chickweed tea. It may also be why chickweed salves have been claimed to help itchy skin in both humans, dogs, and cats. (8) (9)

ORAC testing has not been done, but other in vitro (lab) research reports that chickweed has antioxidants which are potent in their activity. (10)

Among plants, this is one of the least studied for potential anti-cancer properties. Only a couple lab studies have been published.

A Japanese university tested ethanol extracts of chickweed leaves and stems (aerial parts) of the Stellera chamaejasme species. They said they were “high cytotoxic” against cultured human leukemia cells of the K562 cell line. (11)

9. May help protect the liver

The Russian Ministry of Health conducted research using rats, which were intentionally poisoned with a known liver toxin to trigger hepatitis. When the rats were pre-treated with the water-soluble polysaccharides derived from the herb, there were protective benefits seen based on several metabolic parameters measured.

Since they are water-soluble, these polysaccharides would be expected to be in tea brewed from chickweed. (12)

In lab experiments, the plant is reported to show antiviral activity against hepatitis B. (13)

Both German and Japanese researchers report that there are “anti-allergic agents” in the chickweed plant. In addition to the potential benefits for inflammation, these may help alleviate symptoms of rhinitis, hay fever, and more. (14) (15)

What hasn’t been studied?

Lipomas are a non-cancerous (benign) tumor of fatty tissue which occur just under the skin’s surface. It’s commonly found on the upper back, shoulders, and abdomen of people affected. Chickweed ointment for lipoma is a popular treatment in alternative medicine, however there is no human or animal research on this use. Claims and reviews that it can cure lipomas naturally are unsubstantiated.

Uterine fibroids are non-cancerous tumors that develop inside the uterus. Some traditional medicine practices advocate chickweed tea and tinctures to shrink of dissolve these fibroids. There is no evidence of it working or helping this condition, nor polycystic ovary syndrome (PCOS).

For the alleged medical benefits which do have research, unfortunately most is only loosely related at this time.

For example, there’s no study of chickweed helping boils, abscesses, skin ulcers, poison ivy/oak, diaper rash or eczema, but the anti-inflammatory evidence suggests there might be something to them.

Likewise for weight loss reviews. While no human clinical trials exist, multiple rodent studies do support the possibility that the chickweed herb and capsules/powder made with it might help you lose weight, through appetite suppression and potentially speeding up metabolism.

Being that there are zero human studies involving the chickweed plant, it’s unknown as to what side effects it may have. Generally, drinking chickweed tea and eating moderate quantities of the leaf, such as in a salad, are well-tolerated without noteworthy adverse reactions being reported. Chickweed powder, capsules, and other supplements are more concentrated forms which may pose unknown safety hazards. 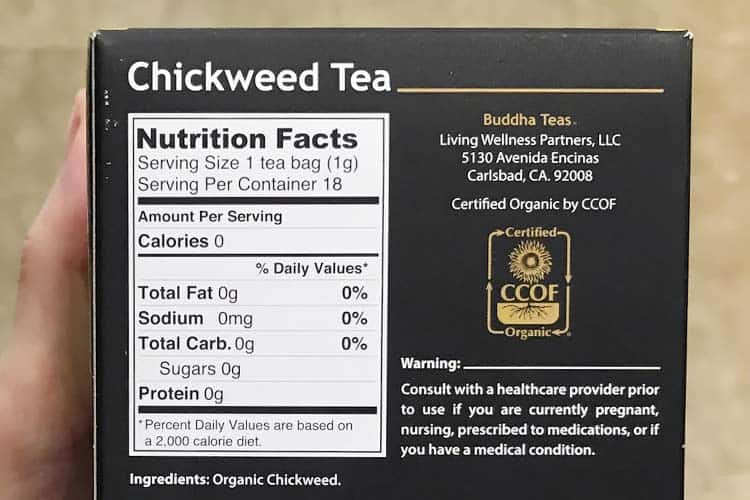 While there’s no evidence to suggest chickweed tea or the herb is dangerous during pregnancy, without any research involving pregnant animals or humans, potential effects and complications are unknown. Pregnant women and those who are breastfeeding should avoid eating or drinking chickweed until clinical data is available.

Even though some species have culinary uses, grocery stores do not sell this herb. Finding where to buy chickweed tea is challenging too, because it’s a niche variety that not many people drink. Among the major brands, Buddha Teas is the main one that makes it. Chickweed is caffeine free, since it’s an herbal tea.

Some vitamin and health food stores sell liquid chickweed extract (tinctures) and capsules for use as dietary supplements.

On Amazon you can buy the capsules by Solaray. For the bulk herb in a dried organic form, you can get a 1 lb bag by Starwest Botanicals. Essential Bliss makes a popular salve marketed for dry skin and itch relief.