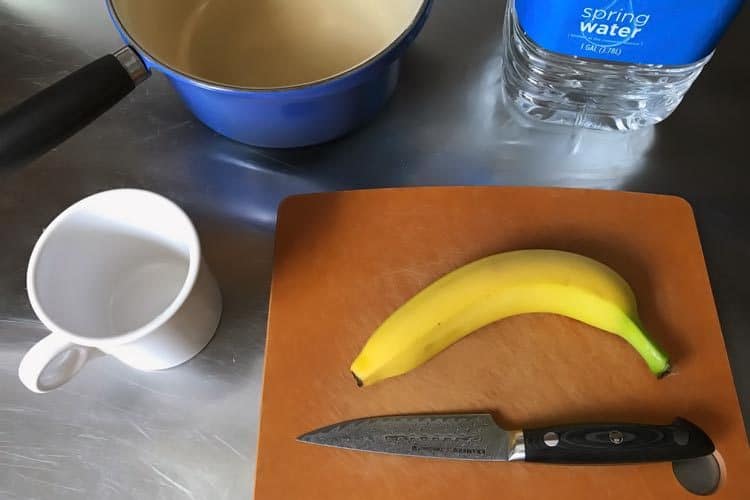 How To Make Banana Tea For Sleep, But Why You Shouldn’t

Those who say it’s healthy for you to eat banana peels are only giving you half the facts.

Is there more nutrition in them versus the fruit? For some nutrients there is, but that doesn’t mean you should eat them. The big problem with eating banana peels is two-fold:

The good news? By making tea out of the peel, it’s possible to address both of these problems:

So drinking it is a safe way to consume it, but what is banana tea good for?

You won’t exactly find tea bags for this niche beverage at the grocery store.

It became a popular home remedy several years ago after the Dr. Oz show touted it as a “bedtime snack” because it’s a “sleeping pill in a peel.” A board-certified sleep specialist presented a similar review of it on the Rachael Ray show. 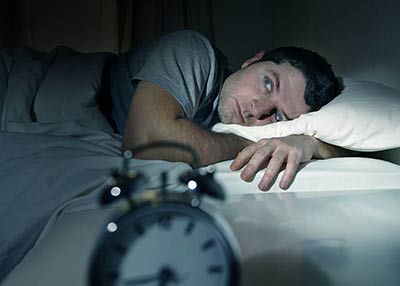 Since vitamin C and other heat-sensitive phytonutrients are destroyed when boiling, the health benefits of banana tea are related to only the minerals. It has been claimed that the peel has higher amounts of magnesium and potassium than the fruit. Since magnesium may help with sleep, the tea is touted as a remedy for insomnia. While some say it’s good for weight loss, there’s no scientific evidence of that, other than the fact that it’s a very low calorie beverage.

The theory that it benefits sleep depends on two things:

Magnesium has been called a “relaxation mineral” because healthy levels have been associated with decreased stress and anxiety. However evidence for excess magnesium helping with stress and sleep is largely anecdotal.

A study done by the USDA used 100 adults (22 men and 78 women) who had poor sleep quality. It was found that 58% of these participants were consuming less than the Estimated Average Requirement (EAR) for magnesium in their diet. It was inconclusive though as to whether a magnesium supplementation helped them fall asleep faster, because those getting a placebo also experienced improvement. (1)

A study done at a nursing home in Italy involving 43 people with insomnia found that a supplement of melatonin, magnesium, and zinc helped with sleep quality versus placebo. This isn’t very helpful though, since melatonin is already a well-known and confirmed sleep aid. (2)

If you believe restless leg syndrome is a legit disease, a pilot study out of Germany found that magnesium treatment helped with insomnia that was specifically related to leg movements at night. (3)

Those are the most related human studies published to date. Beyond that, the most compelling “evidence” is merely people who claim magnesium helps them sleep better.

Whether this benefit is true is not yet known, but given the correlation of insomnia with low magnesium levels in the USDA study, it does seem like a real possibility.

If you want to use this fruit for better sleep, you’re going to have to make it yourself. Banana tea bags are not sold by anyone, at least not yet. Fortunately, it’s a super easy and cheap homemade recipe.

The prep only takes a minute. It’s just the boiling which takes a while. This drink is under 20 calories with 0 grams of fat and very low sugar content. 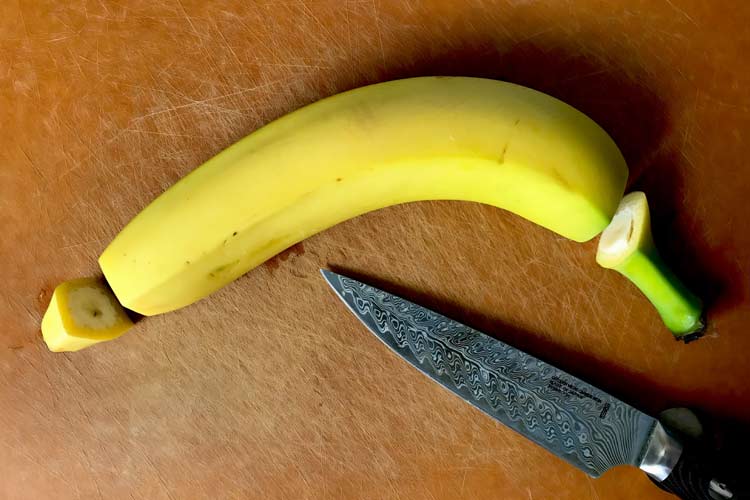 Step 1: Cut the hard ends off your rinsed banana. 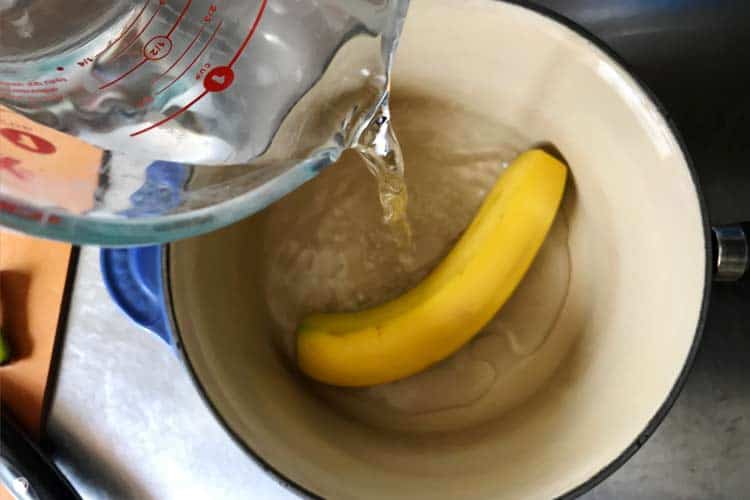 Step 2: Without peeling, place the whole fruit into a medium sauce pan and pour water on top. 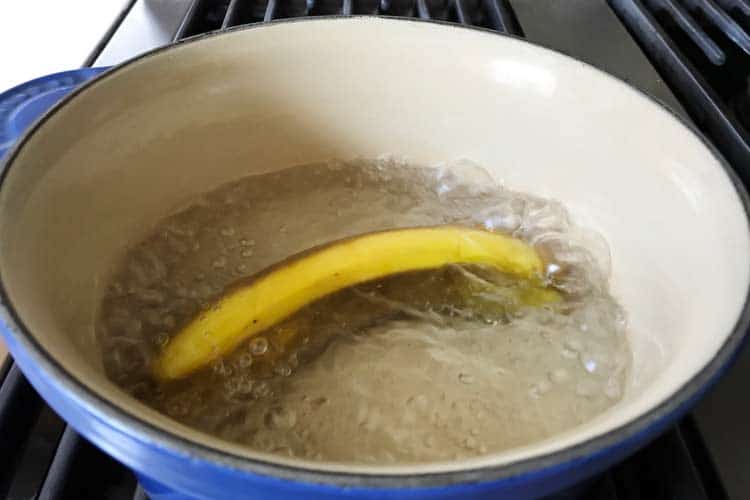 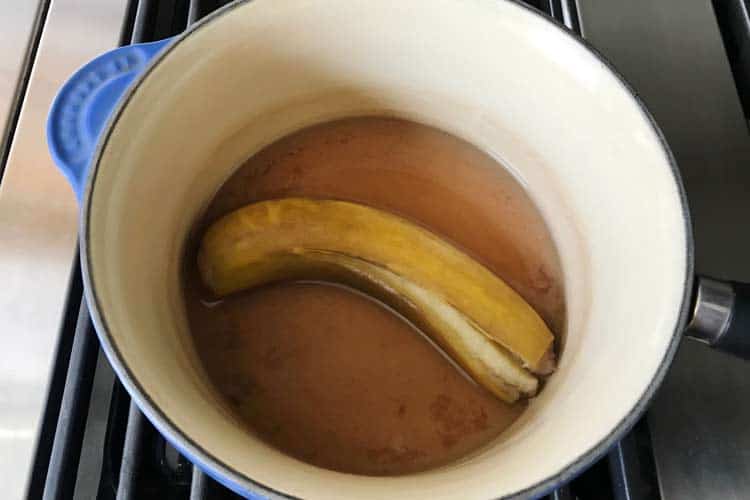 Step 4: Remove from heat and allow to cool. 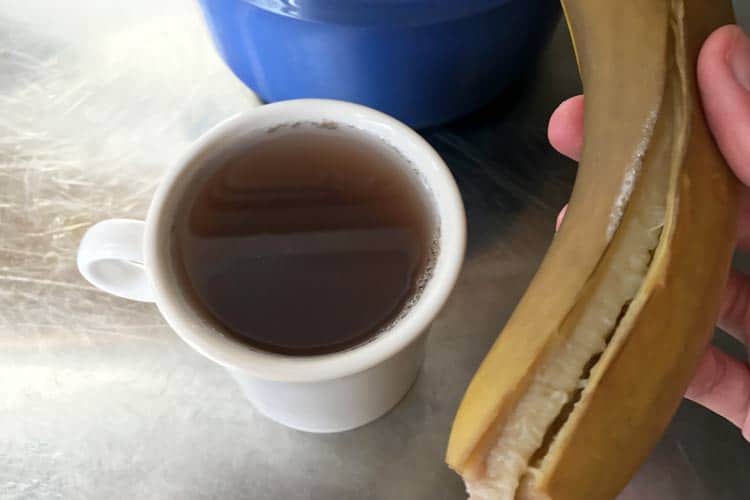 Step 5: Pour into cup and drink within 1 hour of bed. If desired, stir in Ceylon cinnamon to enhance taste.

This recipe makes a single 8 oz serving. The other 16 oz of water will have evaporated during the boil.

It’s grey-brown color looks gross, but it’s surprisingly palatable. What does it taste like? Banana but without the sweetness. And a muted version at that. Coming from someone who doesn’t necessarily like the taste of banana, the tea isn’t so bad.

How much magnesium in a peel?

The big benefit reported by Dr. Oz and The Rachael Ray Show is that the peel contains high amounts of magnesium.

As with the sleep studies, there isn’t good research as to exactly how much magnesium you might be getting from the peel, let alone a beverage made from it.

That’s why you see all these media reports say “more” or “high” magnesium without ever quantifying the amount.

It wasn’t even until this decade when a good a scientific paper was published on the starch, sugar, and fiber composition of peels at different stages of ripening. (4)

A 2016 analysis looked at plantain peel flour, but that’s different than ripe Cavendish bananas. They measured antioxidants and just about everything except for mineral content. (5)

For the few data sources which measure magnesium content, the amount is NOT a “high” or “good source.”

Using dried unripe banana peel meal, it was only 28 mg of magnesium per 100g/3.5 ounces of weight. (6)  That’s the same as how much magnesium there is in a banana you eat – 27 mg for the same weight, according to USDA data. (7) Furthermore, that’s comparing dry unripe vs. fresh ripe.

The data looks even more disappointing when you compare how much magnesium there is in a fresh peel: 2.31 mg per 100g. (8)

If you were to get out a scale and weigh a banana, you will discover the edible portion is about 65% of the weight while the peel is 35%. The edible portion of an average medium banana is 118g according to the USDA. (7) That means your average sized peel weighs around 60g.

After you crunch all these numbers…

…your average banana peel has only 1.39 mg of magnesium!

And remember, there’s no study as to how much of that mineral comes out into the hot water (tea) while boiling it. Even if all of it came out, it’s a very low amount. For adults, the RDA of magnesium ranges from 310 to 420 mg. (9) 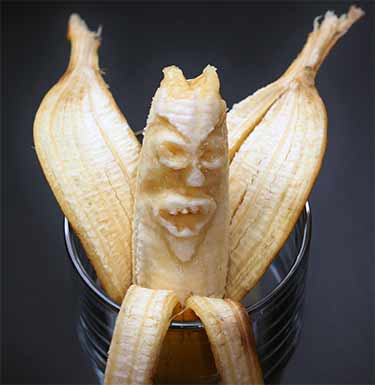 Probably not. If it does, magnesium is probably not the active ingredient causing drowsiness. Even if all of the magnesium from the fruit and peel were transferred into the tea, it would only be around 10% of your RDA for the mineral. The most likely cause of the positive sleep reviews is the placebo effect; it helps people fall asleep faster, because they think it will help them.

And remember since the tea hasn’t ever been clinically studied, it means it may not be safe for babies/toddlers/kids or during pregnancy. If you’re going to try it, you should be an adult man or women without health issues. Ultimately, there is more evidence to suggest this is a myth that belongs on Snopes, rather than a tea that’s good for you.

One of us reviewed this remedy and rather than help, it seemed to hurt sleep quality. Not only did he not fall asleep quicker, but he had to wake up to go pee a couple hours later since he consumed all that liquid at bedtime.

Using banana tea for weight loss is only helpful if you are using it to substitute higher calorie drinks. There are no clinical studies to suggest this fruit helps you shed unwanted fat or burn more calories.

If you want more magnesium, you would be better off using the right supplement. The patented form of magnesium L threonate is the most exciting, since it has been shown to easily cross over into the brain. That’s something other forms like magnesium citrate, carbonate, and other forms haven’t adequately demonstrated in research. On Amazon you can get the threonate brand we like best, which is Life Extension Neuro-Mag.