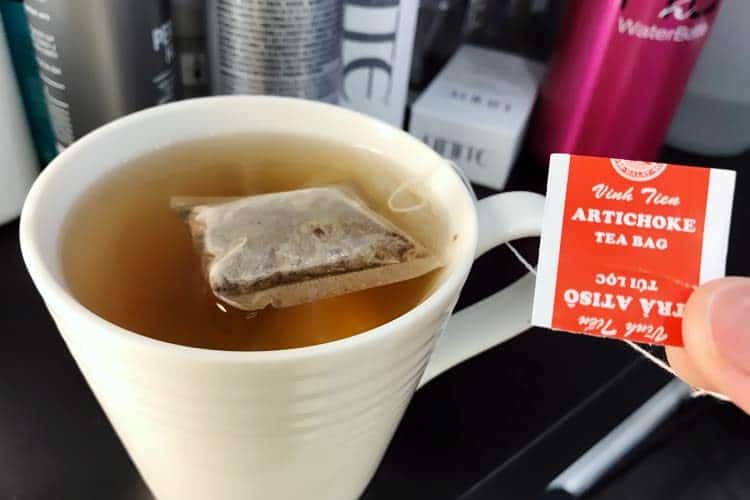 Grilled, steamed, boiled or baked with butter and salt.

That’s what comes to mind for most Americans when they think of this vegetable.

In Vietnam, drinking it may be the first thought. There, it’s among the most popular herbal teas.

Artichoke tea is a caffeine-free beverage made by steeping the leaves or diluting their powder in hot water.

It’s typically the long serrated leaves from the stem which are used to make it. These are different than the flower buds (hearts) which are commonly eaten as food. Some tea recipes use multiple parts; leaves, stalks, flowers, roots, and rhizome. 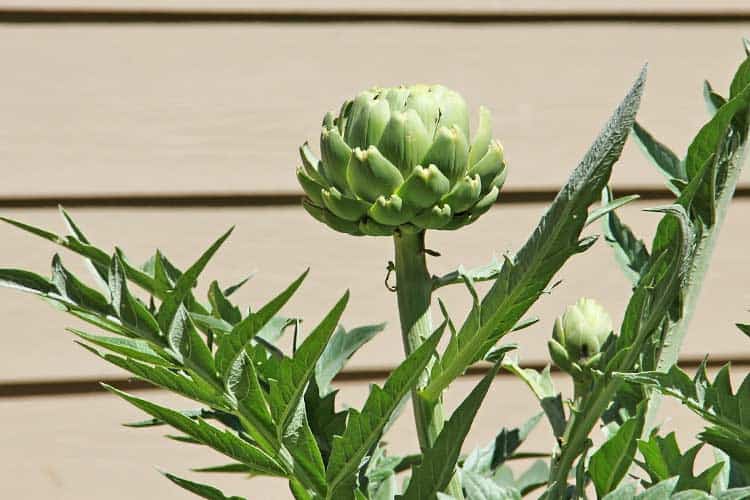 Traditional recipes have a vegetal flavor and aroma. Imagine a sweet grass, which actually tastes better than it sounds. This sweetness comes from the artichoke plant’s fructooligosaccharides (FOS). Those are molecules similar to sugar that humans can taste, but not digest.

In addition to artichokes, FOS are what give onions, asparagus, and leeks their sweet flavor. They’re also a major component of yacon syrup, which is a low calorie South American sweetener which has become a popular weight loss superfood ever since Dr. Oz featured it on his show.

Known as trà atiso in Vietnam, the exact flavor of the tea will depend on the percentage of leaf, stem, and flower used. Some brands include additional herbs. Because most are foreign, rarely do you see organic for sale.

We recently had the opportunity to try an authentic Vietnamese artichoke tea recipe made with 40% stem, 40% root, 10% flower, and 10% licorice.

When we say authentic, we mean it… 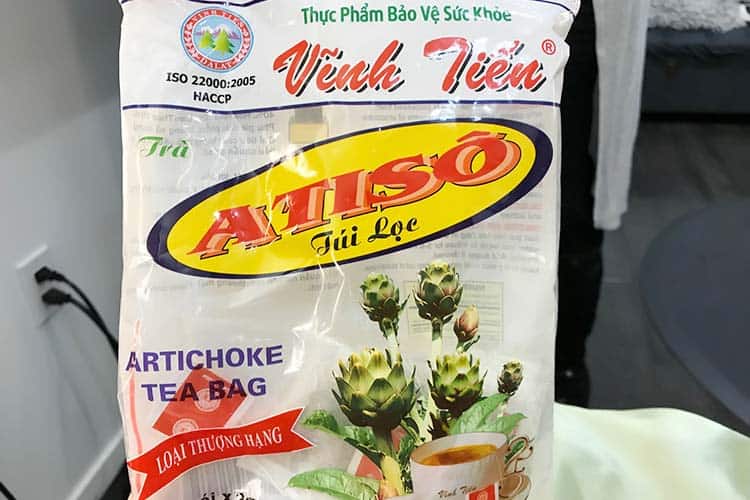 One of us has a Vietnamese hairdresser. He brought back these tea bags from his recent trip home. He always does, because he can’t find Vinh Tien brand in the US (he doesn’t shop online).

The plant steroid glycyrrhizin is found in licorice. This may affect free testosterone levels and have an estrogenic effect in humans (meaning a phytoestrogen, like soy). In order to not interfere with hormones, both men and women alike should stick with a traditional 100% artichoke-based recipe if they’re drinking the tea every day or on a regular basis.

For one that only uses this plant, the brand Tam Chau is one of – if not the most – popular in Vietnam. You can buy their tea bags on Amazon.

Since sugars are not normally added, artichoke tea is good for weight loss since it has virtually no calories. When it comes to reporting nutritional values, the US labeling laws allow for calories, fat, carbs, sodium, and protein amounts to round down to zero. 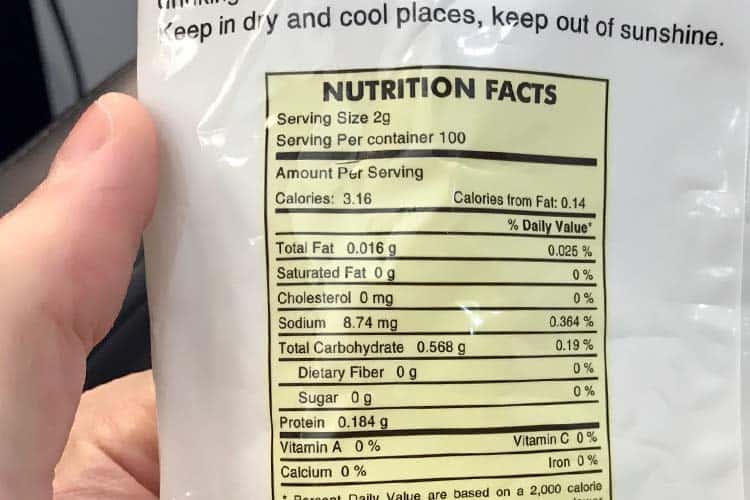 In Vietnam, they report the actual numbers rather than rounding. These are the nutritional facts for artichoke tea. It’s the brand Vinh Tien with 10% licorice that the hairdresser buys, but that added ingredient doesn’t materially affect these values. The brands Atiso, Ladophar, and Tadin report similar. 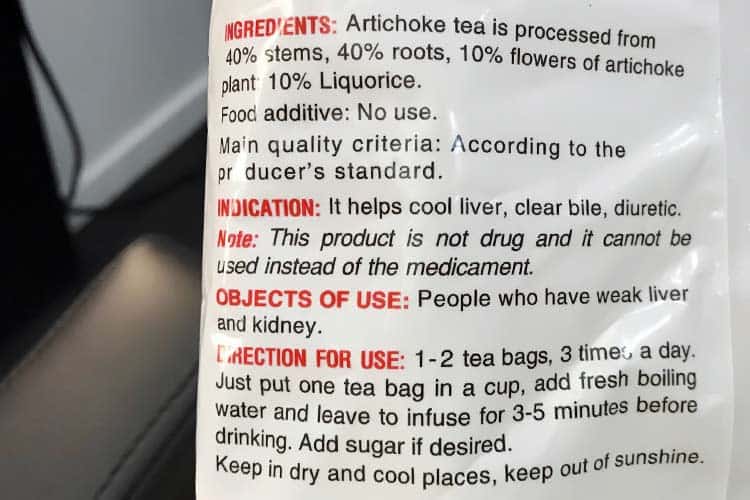 What is artichoke tea good for?

According to the indications listed on Vietnamese tea, artichoke is believed to help the liver, clear bile, and act as a diuretic. The latter supports weight loss, by reducing water retention. As an herbal remedy, some suggest there may be benefits for skin care, cholesterol, blood pressure, diabetes, indigestion, gallbladder, and kidney health.

None of these uses have human clinical trials to validate or prove them. It should not be used to diagnose, treat, cure, or prevent any disease.

Using artichoke tea for acne, skin care, as a sleep aid, and for kidney stones has no research. What follows the uses which do have preliminary research on them.

Boiled artichokes have double the antioxidant content of fresh blueberries. According to ORAC value testing, they’re 9,416 and 4,669, respectively.

That references the edible flower buds/hearts, which are not always used in the tea. The leaves which are used still have a lot of antioxidants; 1,660 is their ORAC. That’s comparable to lacinato kale at 1,773. (1)

2. Supports the digestion of fat

To aid in the digestion of fats, artichoke supplements are recommended by many. Why? Because they contain a compound called cynarin.

There is a fair amount of research on cynarin which suggest that it stimulates the liver to boost bile output. That’s an alkaline fluid used during the digestion process. (2) (3)

The advantages remain to be proven, but here’s a direct quote of what scientists are saying about it in their research (4):

“Ongoing research seems to indicate that artichokes indeed have medicinal qualities. Most significant appears to be its beneficial effect on the liver. In animal studies, liquid extracts of the roots and leaves of artichoke have demonstrated an ability to protect the liver, with possibly even to help liver cells regenerate.”

In 2016, there was even a human clinical study. It looked at wild Egyptian artichoke leaf extract and report positive effects on people with the hepatitis C virus. (5)

Even if there aren’t additional benefits, since artichoke tea is normally sugar free, right off the bat it’s an excellent choice for both type 1 and type 2 diabetics.

Though in addition, it might actually have a glycemic lowering effect.

In the traditional medicine practices of Brazil and other countries, globe artichoke is used as an herbal remedy for diabetes. (6)

There’s no proof that it works or helps humans, as there is no clinical data on the topic. However when it comes to rats…

Artichoke tea to lower cholesterol has not been clinically studied, but heart and leaf extracts have been. The research suggests that cynarin in the artichoke plant reduces LDL cholesterol, which is the bad kind, by influencing bile production. Increased flow of bile from the gallbladder can lead to higher excretion of cholesterol from dietary sources.

When it comes to using artichoke leaf for treating high cholesterol, to date there are 3 controlled trials, involving a total of 262 people. During treatments of just a few weeks, drops of 4.2% to 18.5% were reported.

Some of these trials have design shortcomings and there isn’t enough of them to draw a conclusion, but they are preliminary evidence that artichoke leaf tea might help lower cholesterol levels. (8)

HDL is the good type of cholesterol and you generally don’t want to lower it.

During an 8-week randomized, double-blinded, and placebo-controlled trial involving 92 overweight participants with high cholesterol, their HDL cholesterol went up when they took artichoke leaf extract supplements: 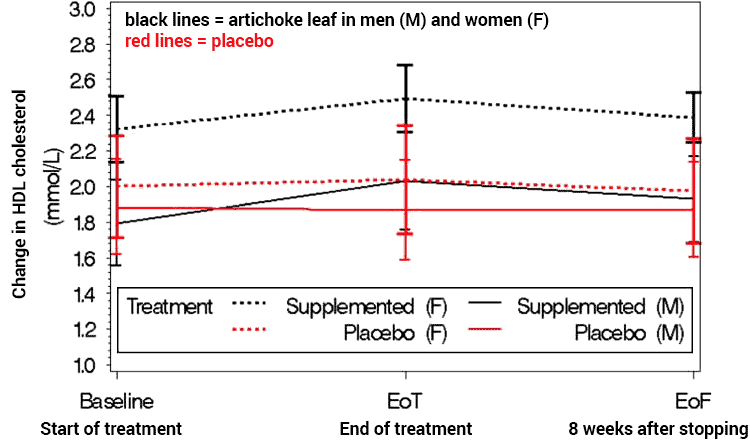 This was happening while their total and LDL cholesterol went down. That’s the exact outcome you would want to see.

The dots on the far right of the graph represent their HDL 8 weeks after stopping treatment. As you see, the black line [treated group] drifts back to their normal amount. (9)

7. May help with IBS symptoms

In the United Kingdom, the University of Reading conducted a study using 208 people with irritable bowel syndrome. It was open label, meaning the participants knew they were getting artichoke leaf extract supplements. Based on surveys done with them, there was a 26.4% decrease in IBS incidences and their total symptom score decreased by 41%. (10)

The brand Grupo Nutrivida+Vida (GN+Vida) is a popular Mexican brand of diet pills and supplements. They make a product called Alcachofa tea which is a combination of artichoke, green tea, red tea, and white tea.

While there are plenty of positive weight loss reviews for Alcachofa, there are no clinical studies published on it.

Whether it or other artichoke teas work for losing weight remain unknown. What can be said is that there is preliminary evidence suggesting their ingredients might help with side effects related to obesity or being overweight.

More stable blood sugar after eating, reduced signs of atherosclerosis (hardening of the arteries), lower oxidative stress of the liver and heart, and potential improvement in the metabolism of fats would all be positive things for people who are overweight. (11) (12) (13) (14)

Even without those theoretical advantages, being that it’s a zero calorie beverage, you don’t have much to lose by trying.

If your goal is to drop a few pounds, then Alcachofa tea is probably the best choice. This is because it combines the artichoke with green tea. That’s been found to boost metabolism in research. Being that it’s a Central American brand, you don’t really see it for sale at retail stores in the US but you can buy Alcachofa on Amazon.

Adverse reactions from drinking artichoke tea are uncommon and in theory, may include the following:

Having an allergy to artichoke is extremely rare. (15)

Since it may increase bile production, this could increase the risk of blockage.

When your liver makes too much bilirubin, there can be higher risk for gallstone formation. If artichoke spurs liver activity, this is a potential risk.

Since the tea may lower LDL cholesterol, this may intensify the effect from statins and other cholesterol lowering medications.

Drinking artichoke tea while pregnant or breastfeeding has not been studied. Neither in humans or animals. Nor is there related research involving leaf supplements.

Using tea bags is the easiest way but you can also make it from the loose leaves.

Place leaf powder in bottom of tea cup. Bring water to boil, remove from heat, and pour into cup. Stir until the powder is fully dissolved.

Without added sweetener, this will be 0g of fat and 0 calories. This is a good brand of organic leaf powder to use.