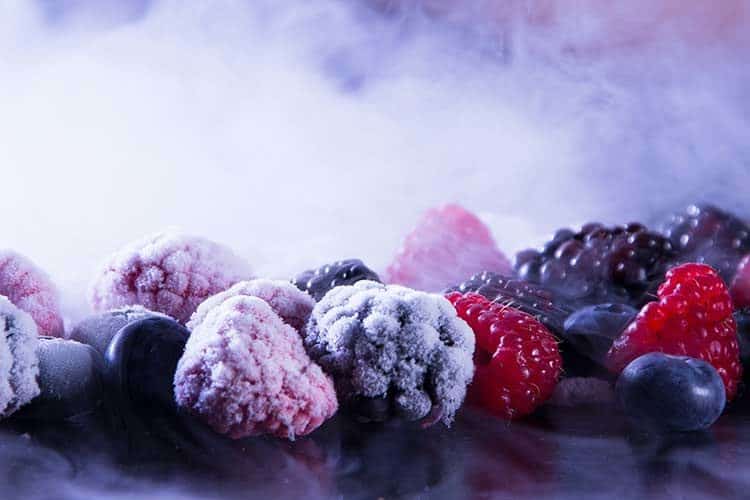 Are Frozen Blueberries Good For You vs. Fresh? See This Test

It’s not just toilet paper. The COVID-19 pandemic punctuated just how fragile the food supply can be. What you were accustomed to fresh may have only been available in the freezer section, if you were lucky.

Is that a less healthy form?

The answer will surprise you.

A while back we analyzed a number of tests which looked at fresh vs. frozen vs. canned fruits and vegetables. Check it out to see the patterns and benefits for each type.

However you can’t rely on just those patterns, because there were outliers. Even within the same category such as berries, two species can react quite differently.

Are blueberries the most popular, best-selling type of berry in the United States? No, that honor goes to strawberries, but they do take a solid 2nd place. That’s according to a 2016 report from Statista, a top data-mining company. Based on fee revenue (dollars paid) the most popular berries in the United States are 1. Strawberries, 2. Blueberries, 3. Raspberries, and 4. Blackberries. This chart shows the percentage market share for each. 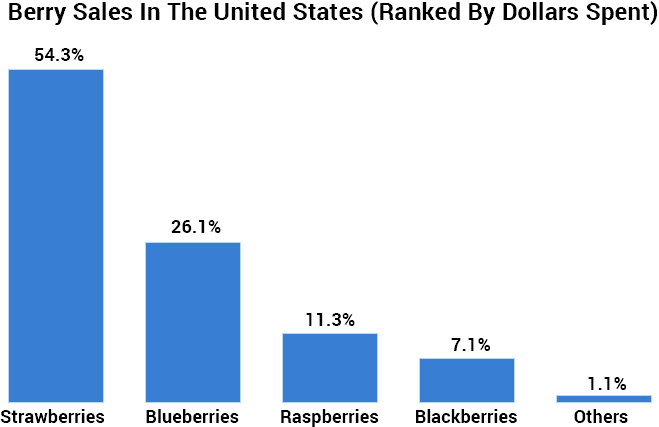 These figures include all forms, whether as a raw food or something else. Stats on the most popular frozen berry are not available (at least not publicly) but we are willing to wager that blueberries might get the numero uno place in that competition.

Whether it’s oatmeal, cereal, or smoothies… people love using them, largely because of their perception that they are good for you. You don’t need sophisticated studies to see they’re probably more popular than frozen strawberries. Next time you’re at the store, just check out how much space in the freezer aisle is allocated to each (blueberry gets the most).

Whatever the case, given that they’re so popular, we think this one deserves diving into, rather than just relying on the patterns seen for overall frozen fruit.

What does not change with freezing?

First, let’s go over the things which will not change whether you’re using frozen or fresh blueberries. Those are:

Unlike most frozen veggies, fruits are not blanched or boiled for safety purposes during their processing. Are frozen berries considered a raw food then? Yep, assuming you don’t dethaw them in the microwave.

And yes, because someone asked in a comment, we know the word dethaw and defrost are technically not real words. But that’s how people talk and we want our science to be understandable to everyone.

Vitamins and antioxidants. These are sensitive to heat, light, and oxygen. Some deteriorate very quickly after the berries are picked. The University of Chester in England did a study a few years ago which looked at the health benefits of eating frozen blueberries and this is what they found (1).

Arguably the most well known antioxidant, how much vitamin C is in frozen blueberries vs. fresh? Here’s the answer. 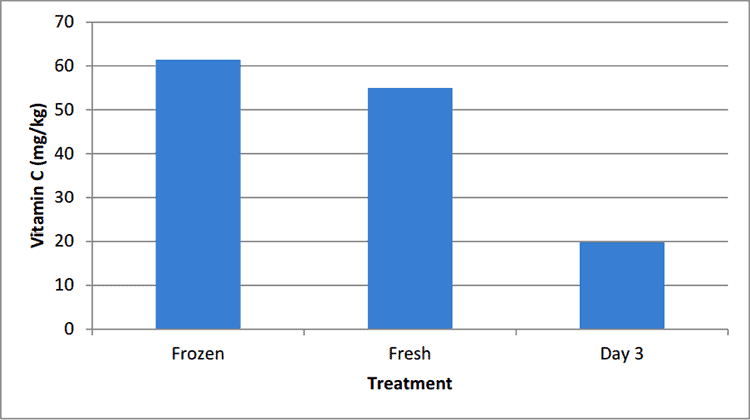 Many people are shocked to see this, as they assume that when you buy fresh it must certainly be the healthiest.

However as these tests show, even when you get them fresh they are lower, albeit slightly. The biggest difference comes after you’ve had them in your fridge for 3 days… providing you a whopping 67% less vitamin C than frozen.

At first glance this might not make sense to you, but there’s an easy to understand explanation. Fresh berries (and just about all fruit) is picked before it is fully ripe. That way when it arrives at your supermarket, it will look ripe.

The problem with this is that even though the berries continue to ripen in appearance, their peak antioxidant content was when they were attached to the bush. Once you pluck them from that, it’s no different than if you pulled a leaf off a tree… its source of life is severed and it begins dying.

On the other hand, frozen fruit is picked at the peak of ripeness since it won’t be able to continue the ripening process at a shivering 0° F (the average freezer temperature).

The reason it’s so much lower by day 3 is because of a process called respiration. Even though your refrigerator is around 39° F, produce continues to burn though its own nutrients to try and stay alive (albeit vastly slower than at room temperature). Throughout this process, chemical bounds are broken down, including the polyphenols in the plant.

Respiration is accelerated by light, oxygen, and higher temperatures. Your fridge minimizes all 3 of those things, especially the light which is only on when the door is open. But the temperature isn’t low enough to stop respiration completely and there’s still plenty of air circulating in your refrigerator.

What are anthocyanins? They are water-soluble pigments which give plants their blue, purple, and red coloring (the exact shade depends on the plant’s pH). They also happen to be a potent class of antioxidants and are the nutrient which blueberries are perhaps best known for (and most studied for in terms of health benefits). 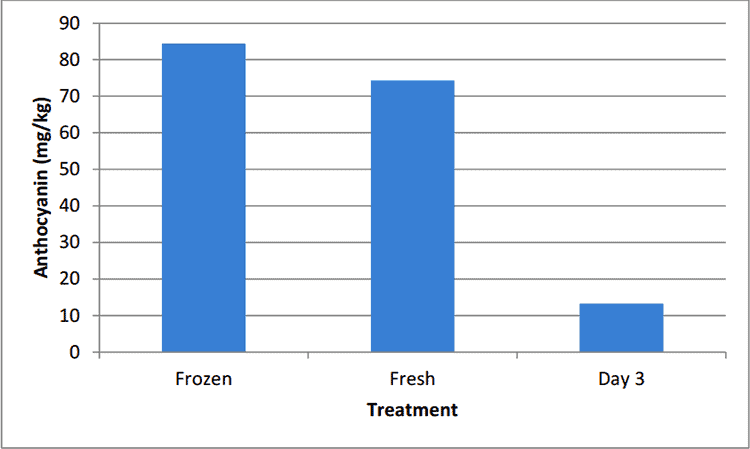 Anthocynanin levels in blueberries follow a similar trend as vitamin C, but the degradation over time is even faster as evidenced by how low the amount is on day 3.

Lutein is a carotenoid, which means it’s primarily a fat soluble nutrient. It’s water soluble nutrients which typically degrade the fastest (i.e. vitamin C and anthocyanins). This is why lutein holds up pretty well over time. This test suggests lutein is sensitive to the freezing process and a large amount is destroyed as a result. 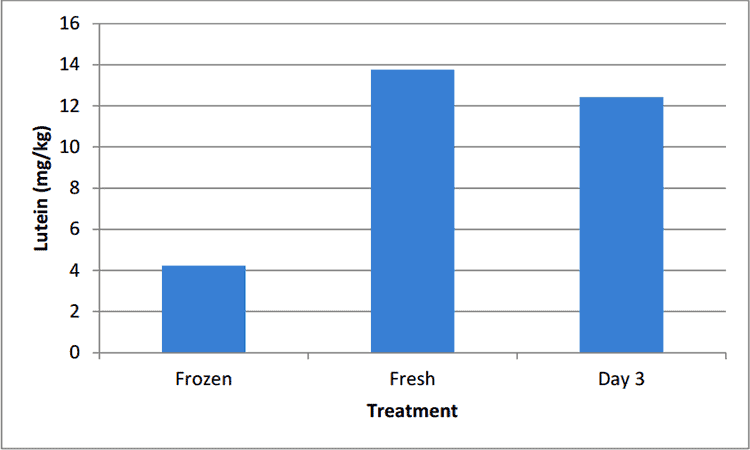 Obviously the first bar is substantially lower than the second. That seems to suggest fresh blueberries are better for you than frozen, and for this category, that is true. But they contain so little lutein to begin with, it’s not something you should weigh heavily on the scoreboard.

Lastly, this test measured the total polyphenol content in frozen vs. fresh blueberries. 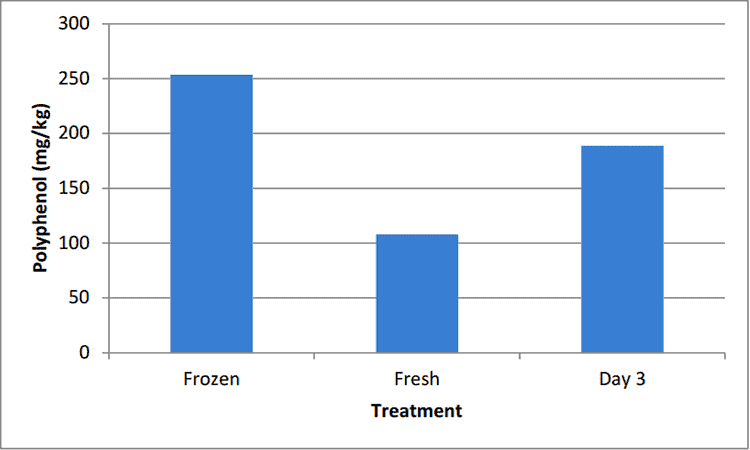 This is interesting, as it’s a prime example of an outlier among frozen foods. Typically, fruits and vegetables have a higher nutritional value when they are fresh versus 3 days after being in the fridge. However this shows that with blueberries, even though many specific antioxidants are degrading, the polyphenol content overall is increasing through day 3.

This is a result of the respiration process, where the cells strive to stay alive as long as possible. Raspberries do the same thing. Although testing isn’t available for blackberries and strawberries, we would predict they most likely behave in a similar manner.

Even with this increase, frozen continues to have a higher amount since the berries were allowed to fully ripen first.

Are fresh blueberries good for you? Of course, but are they better than frozen? Usually not, at least in terms of antioxidants. This holds true whether you are talking about organic or non-organic.

The caveat though is that when we reference fresh, we’re talking about the carton of blueberries you pick up at Trader Joe’s, Whole Foods, Walmart, or wherever you get your groceries. Those were harvested before full ripeness and there are days between harvesting, transporting, and the when you eat them.

Are frozen blueberries as nutritious as fresh if they were just picked? Nope! The following scenarios will provide you with better nutrition, because they can be picked at peak ripeness and very little time passes until you consume them:

Another advantage of frozen

Even in July and August when they’re in-season, we still often times prefer to eat frozen. Why? Because unfortunately, the kind sold most places are conventional blueberries. These were cultivated over the generations to look big, plump, and pretty. That also resulted in them having lower antioxidant content.

You’re getting double the amount of antioxidants with wild blueberries. The bad news is that we’ve never seen a grocery store sell them fresh, not even the specialty health food stores. Though you can readily buy them frozen at many supermarkets including Trader Joe’s and Whole Foods.

With math like that, we don’t see much benefit for buying fresh… unless you want them for taste/texture in a recipe.

If you buy frozen, don’t thaw them in the microwave! Instead, before you go to bed, simply pour some in a dish and put it in your fridge. When you wake up in the morning, they will look like the above photo – still raw but fully dethawed. Ready to eat for breakfast in your cereal, smoothie, or whatever else!

That all said, the healthiest way to get many types of berries is using freeze-dried powder, such as acai and maqui. Perfect for your pandemic pantry, as well as good times!