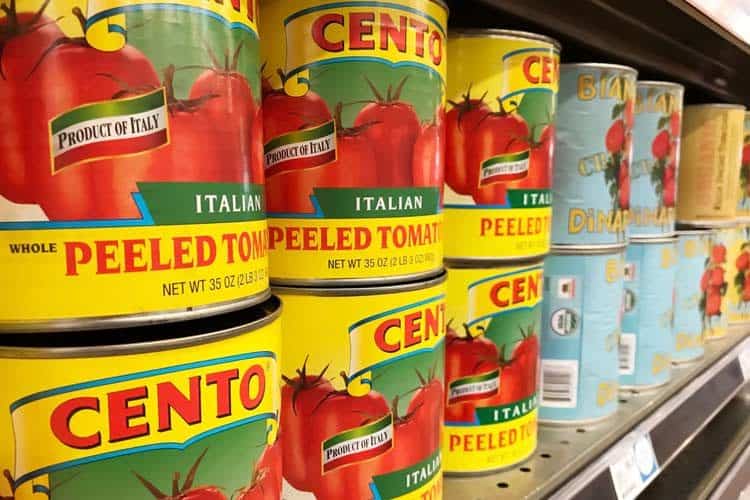 Are Canned Tomatoes Bad For You? BPA vs. Prostate Cancer

The middle of grocery stores – i.e. the canned food aisles – are starting to look like ghost towns. Grandma may have bought many things there, while her millennial grandson sticks to the store perimeter, buying the fresh and premade foods.

In the case of produce, you may be surprised to hear that frozen vegetables are healthier than fresh. This is because of respiration. That’s basically the veggie burning its own nutrients to try and stay alive after being picked.

As an example, just look at how much lutein is burned during the first 3 days with broccoli, carrots, and Brussels sprouts. 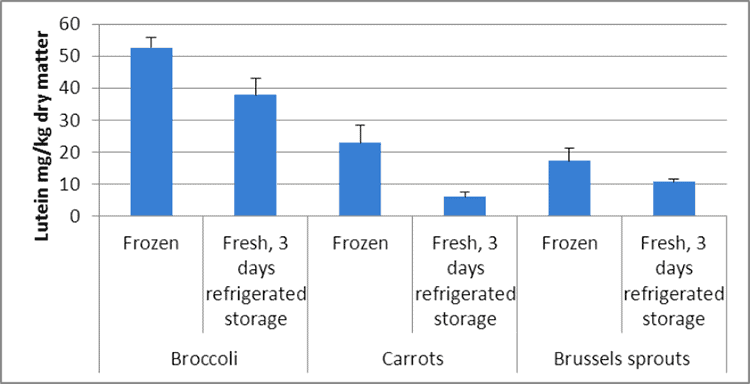 When it comes to tomato products, the pros and cons of fresh vs. frozen vs. canned don’t follow the typical trends.

Compared to fresh recipes, jarred salsa and canned spaghetti sauce are typically less healthy due to the high amounts of sodium (salt) added by most brands. For vitamins, minerals, and phytonutrients, the nutritional values will be similar. This is because all 3 are cooked.

Whether it’s canned tomato soup, juice, spaghetti sauce, salsa, or just plain tomatoes in a can, all have been cooked. As part of the canning and jarring process, after the containers have been sealed, they are heated to destroy microorganisms inside. The pasteurization involves temperatures of at least 145°F (63°C).

Prior to the canning process, foods like stewed tomatoes and marinara sauce were likely made with pre-cooked ingredients; tomato paste, roasted garlic, and similar.

Whether it’s cooking on your stove top or the heat of pasteurization, both will largely destroy the vitamin C content.

What about other antioxidants?

Based on ORAC value testing, which is a measure of total antioxidant activity detected, here are the values for 100g (3.5 oz) of various forms:

The higher the number, the more antioxidants there are.

Why are the tomatoes in cans and jars ranking similar and even better than fresh tomatoes? Does this make any sense?!

Actually it makes total sense, once you understand what’s inside this fruit (yeah, it’s technically a fruit).

The health benefits of canned tomatoes

With the heat of cooking or pasteurization, the vitamin A won’t change but the vitamin C will.

This may seem like a strike against eating canned, until you consider the following:

Your body can absorb the antioxidant lycopene, as well as similar carotenoids, more easily after they have been cooked. The bioavailability for lycopene is up to 380% higher. (1)

This means you may get more lycopene from eating canned tomato juice and sauce than you will from eating fresh.

Even though the vitamin C content is largely destroyed by heat, one has to factor in the concentration that cooked tomatoes offer.

Since the cooked versions contain less water, there is a much higher concentration of the active ingredients. This is especially true with spaghetti and pizza sauce, where you may need 20-30 fresh tomatoes just to make the equivalent of what’s inside a regular 24 oz. glass jar of Prego, Classico, or Ragu.

Any Italians out there, or frankly anyone who makes homemade sauces for their pasta, can attest to just how many they will need for their recipe. It’s very expensive to make homemade sauce using the fresh! 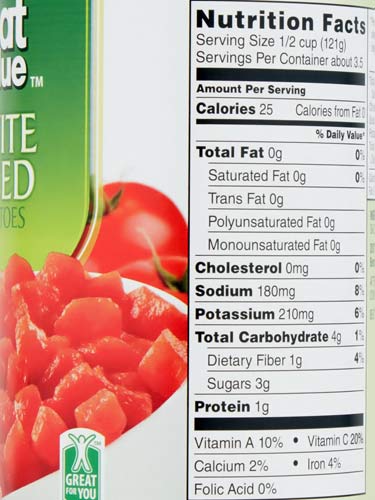 Even though a large percentage of the vitamin C is destroyed with canning/jarring, a lot more tomatoes are used. As a result, the net difference in vitamin C per serving or by weight may not be that different.

For example, a can of Walmart’s generic brand “Great Value” of petite diced tomatoes reports 20% of your daily value for vitamin C, per 1/2 cup serving (121g). That’s the same percentage the USDA reports for your average medium fresh tomato of nearly identical weight (123g).

But vitamin C is not the biggest benefit.

It’s true that C is an essential nutrient, but you will find at least some in just about every fruit and vegetable. Anyone who eats a largely plant-based diet is getting plenty, especially if they’re eating fresh salads on a daily basis. Too much vitamin C may actually be bad for you.

The biggest advantage of eating canned tomatoes is their potent concentration of lycopene.

Lycopene is the bright red carotenoid that gives them their signature color. But don’t assume apples and other red fruits have this antioxidant, because most don’t.

The next highest – red peppers – have 84% less lycopene. After that, it’s asparagus, with over 99% less.

As you see, it’s a rare compound in high amounts. There are really only several foods that are good sources.

The most exciting research is on prostate cancer and the results suggest that you need to eat tomatoes rather than isolated lycopene to attain the benefit.

Research using lycopene supplements for the prevention and treatment of prostate cancer suggest they don’t work. (3) 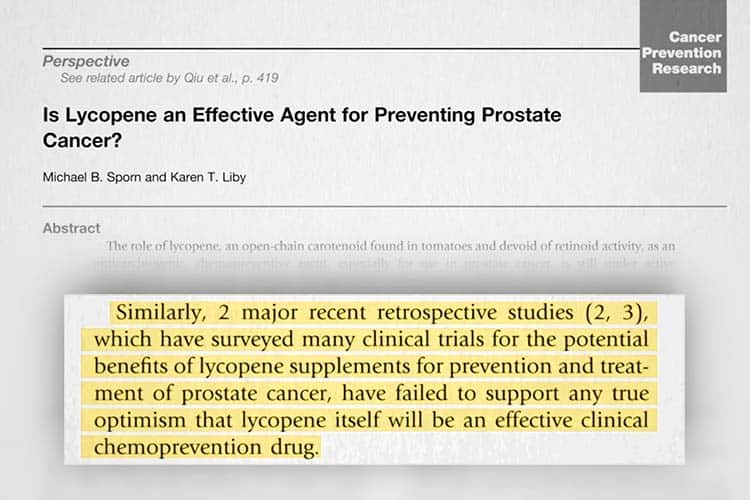 That’s about lycopene by itself.

What about whole food sources of it, like tomatoes? Is it possible there are other co-factors found in the plant that are needed to see results?

Fresh and canned tomato products, including spaghetti sauce and even ketchup, contain different types of carotenoids:

These are among the top 10 carotenoids that have been found to accumulate in human prostate tissue. Plus there are non-carotenoids in them which are believed to have beneficial effects, too. (4)

Maybe the reason lycopene supplements don’t work is because they’re lacking these other phytonutrients which are naturally found in the food sources.

A study out of Ben-Guiron University and Soroka Medical Center in Israel reports that the anti-cancer effects “resides in their combined activity.” (5) 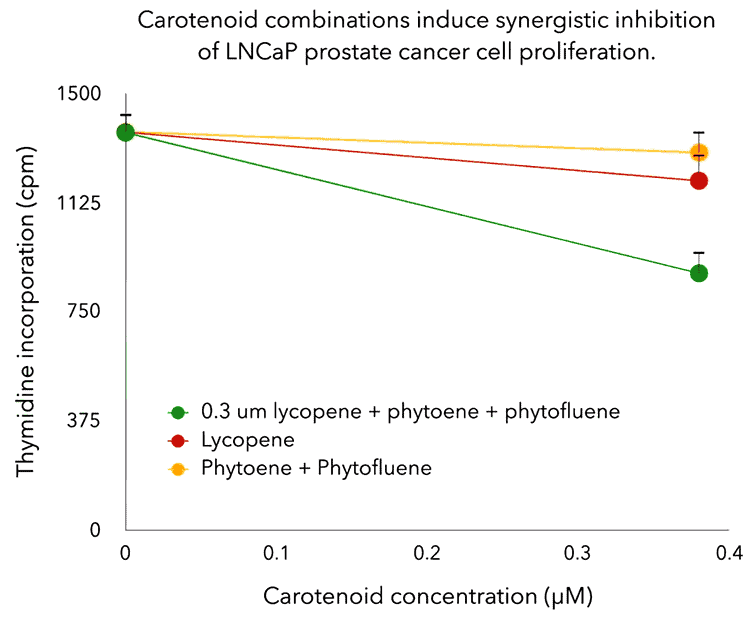 In this test, they used cultured human prostate cancer cells, which are essentially a tumor in a Petri dish. The lycopene by itself didn’t do much. Neither did the phytoene and phytofluene. When all 3 carotenoids were combined, the anti-cancer effect on cell proliferation was greater than the sum of the parts.

In a clinical trial involving 32 men with prostate cancer, PSA concentrations decreased 17.5% after they consumed tomato sauce. The tissue that was surgically removed had 28.3% lower prostate 8-OHdG. Both of those are markers for cancer growth. (6)

There are disadvantages of canned tomatoes. The biggest is the fact that most brands continue to use bisphenol-A (BPA) linings. Its prevalence is not a myth. The reason manufacturers continue using it is because of how acidic tomatoes are.

Some have switched to bisphenol-S (BPS) and phthalates which also give cause for concern. Scientific American reports that some of these similar estrogen-mimicking compounds “may be just as hazaradous.” (7)

Without BPA, BPS, or something else, these aluminum cans would be eaten away. Since safer alternatives cost more, few manufacturers are willing to use them.

The reason why many canned beans and other vegetables have done away with BPA is because they’re far less corrosive, which makes substitute materials a more viable option. 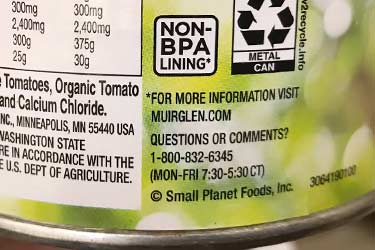 The pH range for canned tomatoes and tomato paste is 3.5 to 4.7. Juice is 4.1 to 4.6. Those pH numbers are not much different than apple cider vinegar.

How to tell if a can is BPA lined is not easy. Manufacturers are not required to disclose it on the label. Most BPA linings are white, but so are BPA-free linings made using other materials. Without lab testing, it’s often impossible to know for sure.

Not all manufacturers openly disclose whether or not they’re using BPA linings, though some do.

Note that even though this list of brands is BPA-free, they don’t always disclose what substitutes they’re using.

If a brand is not listed, that doesn’t necessarily mean they’re using BPA. With some the answer is murky.

For example, Walmart’s Great Value is BPA-free for some canned food but not all. Since they don’t label which are BPA-free, it may be easier to avoid the brand altogether.

Are Aldi cans BPA free? As is the case with Walmart, Aldi Simply Nature brand of organic canned black beans, diced tomatoes, and other veggies may or may not have BPA linings, as the company has not adopted or published a public policy as to their usage.

Trader Joe’s BPA free cans include “most” canned beans, fruits, and vegetables, with the exception of canned artichokes, mandarins, hatch chili peppers, olives, and giant baked beans in tomato sauce. Trader Joe’s is owned by Aldi, so this information might be a clue as to what you should expect with Aldi’s Simply Nature canned products. 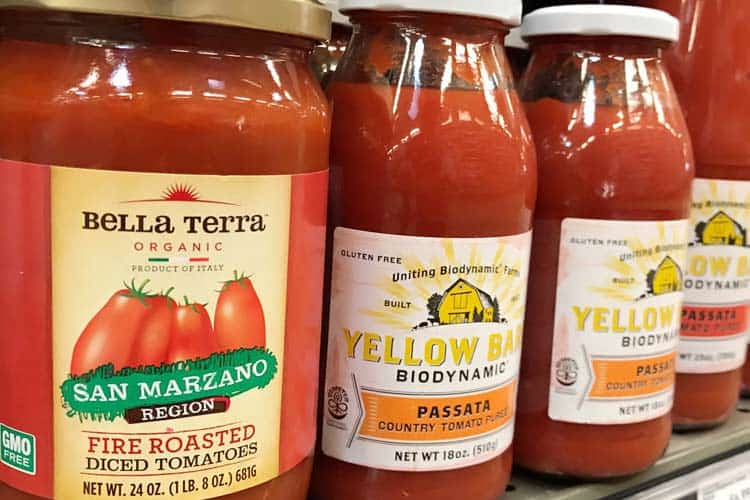 Glass jars are better, but not perfect.

Trader Joe’s admits to using BPA to line the metal lids of glass jars. They claim “it doesn’t come in contact with the food” which isn’t a 100% accurate statement. All you have to do is hold a glass jar at an angle to see direct contact being made! (8)

Eden Foods is an independent Michigan-based manufacturer who became the first brand to have 100% BPA-free canned beans on the market in 1999. After years of R&D, they realized there was not a preferred alternative for tomato products that didn’t use any BPA, BSA (bisphenol-S) and/or phthalates.

As a result, they give their customers a choice of tomatoes in glass jars or cans. The amount of BPA in the linings is “not detectable” according to industry standards, but Eden reports it’s actually 5 ppb (parts per billion) according to their own testing. On the twist caps of the glass jar versions, it’s separated by a second protective coating which contains zero. That prevents food contact.

Finding specialty varieties, like San Marzano or heirloom, can be a challenge.

Whatever brand is in question, the types of canned foods most likely to use BPA will be the tomato products, since they are the most acidic.

Canned tomatoes are only bad for you if they have high amounts of added salt and use BPA linings. If you buy organic tomatoes and sauces in cans free of BPA and similar, they are healthier than fresh due to higher concentrations of lycopene and other carotenoids.

Given that organic fresh tomatoes typically run $3 to $5 per pound, this is one type of produce where it actually makes more sense to buy a shelf-stable version, in order to get high amounts of the phytonutrients at a reasonable cost.