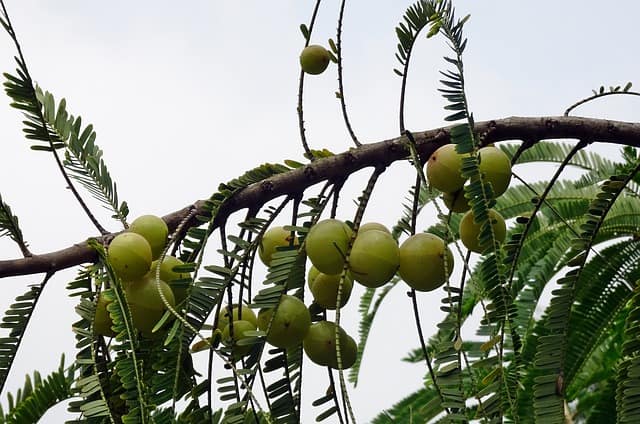 Is Amla The Most Antioxidant-Packed Whole Food?

In America, there is a well known saying “An apple a day keeps the doctor away.” The apple represents health and nature and provides a host of vitamins and antioxidants. In India, a much older and wiser country, their “apple” is a sour little fruit, the Amalaki or Amla berry which has been used in Ayurvedic medicine for thousands of years.

The Amla berry, also known as Indian Gooseberry or Amalaki, grows on a tree that is sacred to both Hindus and Buddhists of India who believe that the Amalaki was the first tree to appear on earth, brought forth by the tears of Brahma while he was meditating. This small fruit is believed to provide “perfect digestion” in turn leading to radiant health, shining eyes, skin, and hair, and youthful aging. 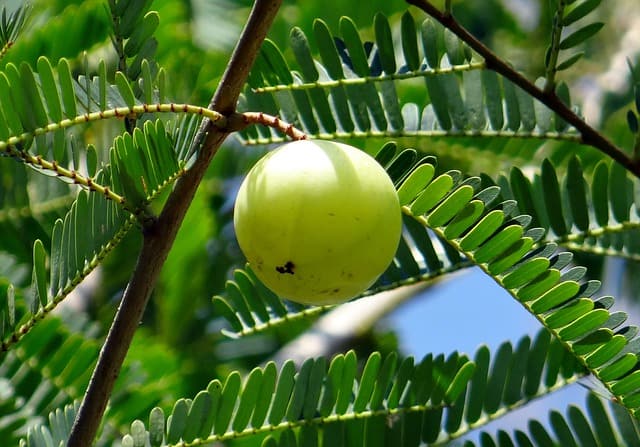 According to a 2011 review published in the European Journal Of Cancer Prevention, Amla is “the most important medicinal plant in the Indian traditional system of medicine, the Ayurveda…The fruit is used to treat many ailments such as common cold and fever; as a diuretic, laxative, liver tonic, refrigerant, stomachic, restorative, alterative, antipyretic, anti-inflammatory, hair tonic; to prevent peptic ulcer and dyspepsia, and as a digestive.

A study published in the International Journal Of Health Sciences found that “superoxide dismutase constitutes an important antioxidant defense against oxidative stress in the body. Potential therapeutic applications can support the prevention or control of various diseases including: cancer, cystic fibrosis, diabetes and rheumatoid arthritis.”

Amla has been found to:

Amla fruit is considered to be the most rejuvenating fruit in Ayurvedic healing. In Sanskrit, amalaki means “the sustainer.” The list of antioxidant health benefits of amalaki is extensive and is largely due to its abundance of beneficial antioxidants.

Antioxidants have an important role in maintaining health – they combat free radicals. Free radicals are unstable reactive molecules that attack healthy tissues, damage membranes and can even kill cells.

Let’s take a closer look at how free radical damage can lead to serious ailments such as heart disease and digestive disease:

Heart health is greatly affected by free radical damage. The tissues of the heart and circulatory system are vulnerable to toxins and free radicals. When the circulatory system tissues come under attack, the body attempts to repair the damage with a layer of fatty plaques. These plaques eventually build up in the arteries, restrict blood flow, and lead to heart attacks.

Toxins and free radicals also lead to many digestive ailments. The inflammation response of the tissues in the digestive system can lead to problems such as constipation, acid reflux, ulcers, gastritis, colitis, and hemorrhoids.

So how do Amla’s antioxidants help? Antioxidants have the ability to combat free radicals and toxins. In the case of heart disease, this stops the cycle of tissue damage and plaque build-up in the arteries. When it comes to digestive diseases, gastrointestinal tract inflammation can be reduced, which improves related digestive problems.

Antioxidants like those found in abundance in amla fruit are important in maintaining optimal health. One of the greatest things about antioxidants is that they are readily available from natural sources. One of the most well-known anti-oxidants is vitamin C.

Amalaki is one of the richest sources of vitamin C found in nature, with 20 times the amount found in an orange. Other antioxidants in amalaki include: bioflavonoids, flavones, polyphenols, and carotenoids. Amalaki offers a natural tool to boost wellness and increase health.

Ancient writings about Amla in India suggest it is actively beneficial to the intestinal flora and supports healthy colon function, helping to reduce inflammation in the digestive tract while assisting the bowels and strengthening the heart. Comments like these appear in a publication called the Indian Materia Medica, which lists 2,000 natural remedies, mainly of vegetable origin.

Amalaki fruit or amla is used in Ayurvedic medicine to treat a variety of conditions and ailments. Amla fruit is used as an aphrodisiac, antipyretic, antidiabetic and cerebral tonic. It is also used as an immunity booster, adaptogen and a powerful antacid. It can also raise the total protein level and increase body weight due to positive nitrogen balance and its anabolic effect, building muscle and body mass by stimulating protein synthesis.

Detoxification – Noted herbalist Alan Tillotson of the Tillotson Institute for Natural Health writes that Amla is helpful in “removing the toxic wastes of poor digestion which remain in the body.” A study published in 2003 found “the presence of amla (amalaki) resulted in an enhanced cell survival, decreased free radical production and higher antioxidant levels.

Cancer Protection – Studies in mice have shown that the Amla fruit reduces the damaging effects cancer cells have on the body and, when used prior to radiation, offers a protective shield to prevent damage to the chromosomes.

Cholesterol Reduction – In medical studies conducted on rabbits, Amalaki had a cholesterol-reducing effect on rabbits whose numbers were elevated over a 60-day timeframe. This provides overall health benefits to the body’s cardiovascular system as a whole.

Immunity – Like many other potent antioxidants, the Amalaki fruit contributes to a boost in your immune system. Life-spans in mice subject to tumors increased by up to 25% with the consumption of an Amla. Other conditions for which it’s used include constipation, colic, asthma, anemia, gout, and even mental disorders.

In a study published in the Journal Of Clinical Biochemistry, laboratory animals were “administered enough alcohol for sixty days to significantly increase oxidation of fats in the liver, and to significantly lower levels of glutathione as well as superoxide dismutase, Amla berry alleviated the damage and restored the antioxidant levels.

Skin Repair – Skin is protected and damaged skin is repaired by Amla berry, as its antioxidants prevent the free-radical damaging effects of ultraviolet radiation. During a study published in the Journal Of Cosmetic Science researchers exposed skin cells called fibroblasts to ultraviolet light and found that an extract of the amla berry protected pro-collagen 1 (a precursor to collagen in skin).

In this 2011 study, amla berry protected against ultraviolet-B radiation’s damaging impact as well. This study “looked at skin cells in vitro, and found Amla berry four times as protective as ascorbic acid; this suggests the topical benefits of Amla.” The researchers concluded that the berry extract has “promising cosmeceutical benefits against photoaging.”

Diabetes – There is growing interest in amla and amla juice as a possible treatment for Type 1 diabetes as the fruit has been shown to stimulate the pancreas to produce more insulin.

History Of Amla And Its Use In Ayurvedic Medicine 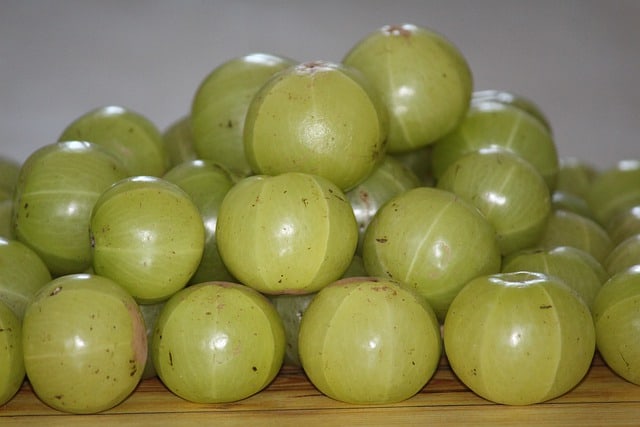 Amla or amalaki is a small tree native to tropical Southeastern Asia including India, Pakistan, Sri Lanka, and Malaysia. The “berry” is a small round fruit that is about 1 inch in diameter, slightly smaller than the size of a golf ball.

Amalaki grows well in India thanks to the suitable climatic conditions as this tropical fruit is sensitive to temperatures below 32 degrees. The amalaki tree can bear fruit for up to 70 years but does not bear fruit in its first 3 years.

The amla fruit is very bitter but widely consumed in India for its many health benefits. Amla is the main ingredient in “rasayana” popular in Ayurvedic Medicine. Rasayana are rejuvenation and longevity tonics in this ancient form of healing arts and they are said to provide a long life free of disease, a powerful memory, intelligence, youth and vitality.

Amla fruit is also the main ingredient in Chyawanprash, an herbal jelly compared to superfood. This is one of the most popular of the “rasayana” and is taken daily by all who can afford it in India especially if they are over the age of 40.

Those who practice Ayurveda believe that each meal should be balanced and needs to contain all six tastes or Rasas to create optimal health. Amla is a popular fruit, side dish or ingredient among Ayurvedic practitioners as it is the only food that contains five of the six essential tastes: sour, sweet, bitter, pungent, and astringent. It lacks only the salty taste.

As more Western practitioners and patients are drawn to natural health food sources and traditional medical alternatives (with scientific and clinical validity) they may begin to study and implement Eastern philosophies, holistic treatments and Ayurvedic Medicine. Including the ancient history and traditions surrounding Amla and similar medicinal botanicals and their growing popularity outside of Eastern Medicine