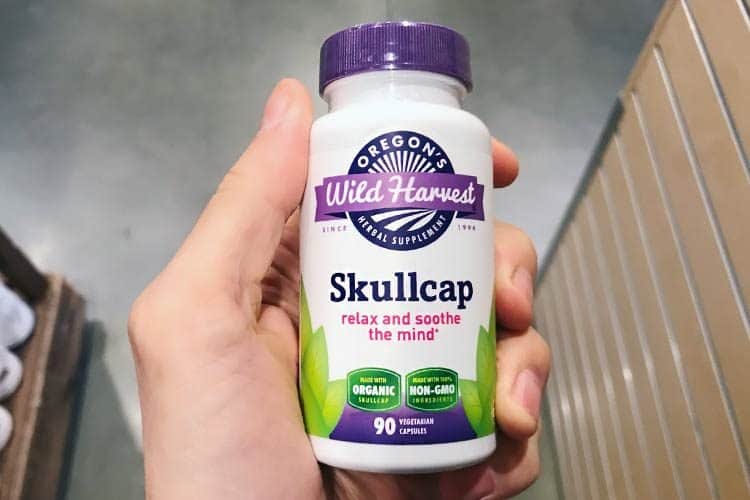 American vs. Chinese Skullcap For Sleep and Anxiety

The beanie hat of the same name? That might help insomnia, but only if you pull it over your eyes for darkness. What we’re talking about here is the plant. It’s more useful for that purpose!

What is skullcap herb used for?

Skullcap is a flowering plant in the mint family. There are over 350 species but only two are regularly used in alternative medicine.

Native Americans use the Virginian or blue skullcap (Scutellaria lateriflora) for nervous tension, menstrual disorders, digestive and kidney problems. The herb is prepared as a tonic or tea for treatment. At one point in history, they believed it could help the madness associated with rabies. That’s why it’s also called mad dog and mad weed.

Traditional Chinese Medicine uses Baikal skullcap (Scutellaria baicallensis) as one of their 50 fundamental herbs. Root teas and decoctions are used for treating eczema, asthma, hay fever and other allergy symptoms. The herb is used for tumors. Less commonly its used for neurological disorders.

While there is preliminary research to support some of these purported benefits, all remain unproven. 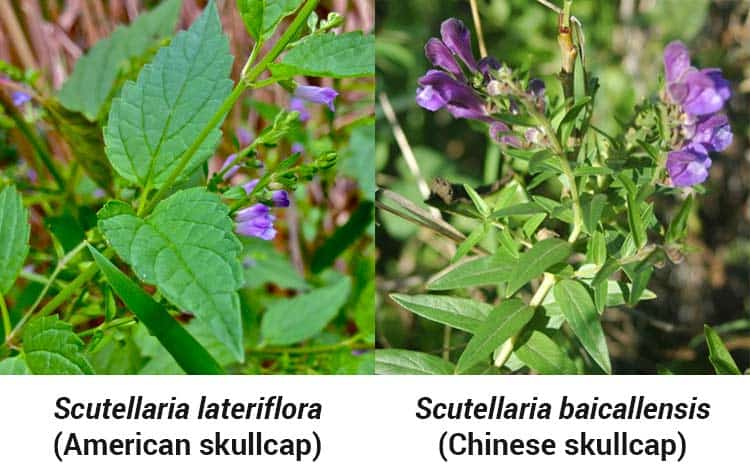 Photos by Rolf Engstrand and Doronenko via Wikipedia [CC BY 3.0]

Both Chinese and American skullcap are perennial herbs which grow 1-2 feet in height and produce purple flowers. Aside from that similarity, their leaves and stems are quite different. The Chinese herb has a strong stem with thick, almost dagger-like leaves. They crescendo to the top, where the flower buds are found. The American herb has a thin stem with larger but more delicate leaves. The flowers on them are smaller.

Both species share many chemical compounds and phytonutrients, however their differences are distinct enough where they are not interchangeable. (1) (2)

The English name of skullcap dates back several centuries, to a time when their petals resembled the helmets of medieval European soldiers. That’s why the herb is called skullcap to this very day.

For more on their history, check out Handbook of Psychotropic Herbs and National Geographic’s Desk Reference to Nature’s Medicine.

Is skullcap good for anxiety?

Along with kava kava, passionflower, and valerian, taking skullcap for anxiety is among the most popular herbs for that purpose. While there is evidence to suggest that the Chinese baikal helps, the type most studied for reducing stress and promoting relaxation is American skullcap.

In 2014, the University of Westminster in London published the results of a placebo-controlled and double-blinded study involving the American version of the herb. Here’s how it worked:

According to Total Mood Disturbance as measured by the Profile of Mood States, there was a major benefit seen between the two groups, when compared to their pre-treatment scores which were comparable. The researchers said it “significantly enhanced global mood” without reducing levels of energy or cognitive function.

This is important because many calming herbs, and obviously medications, can have a detrimental effect on one’s mental performance. Sure, they may reduce stress, but what are they doing to your job performance?! (3)

Another double-blinded and placebo controlled trial was published a decade earlier. The 19 participants were given freeze-dried skullcap supplements in dosages ranging from 100 to 350 mg. When compared to placebo, there were noteworthy improvement in feelings of anxiety during the 2 hours after taking it. (4)

In 2018, the University of Melbourne in Australia published a systematic review based on the clinical evidence to date. Between the lab experiments, animal studies, and human trials, they concluded that skullcap may help with psychological stress, excess worry, and difficulty focusing by working as a GABA modulator. (5)

GABA is an inhibitory neurotransmitter. Higher activity of it is associated with decreased fear and anxiety. (6)

Does skullcap make you sleepy?

Only a couple dozen pieces of literature are specific to this herb and anxiety. Even less research exists on sleep. There are no clinical trials of using it for that purpose.

In theory, taking a 400-1,200 mg American skullcap dosage for sleep may work by reducing your feelings of worry and anxiety. By having those suppressed, your mind is able to shut-off easier at night. This is different than making you sleepy, like a sedative such as Ambien or Tylenol PM.

This hypothesis is based on:

In short, skullcap is believed to act as a natural anxiolytic.

Is skullcap safe to take?

If you’re taking it for insomnia or anxiety, the most likely bad thing to happen is that it doesn’t work. Records for it in the NIH’s LiverTox database summarize that skullcap “has been implicated in rare instances of clinically apparent liver injury” however it wasn’t clear if skullcap was the cause, especially since most cases involved combinations of herbs, phony products and other mislabeling. In those cases, the liver side effect of jaundice appeared 6-24 weeks after beginning regular use. After discontinuing, the “recovery was rapid.”

Long term use of skullcap resulting in chronic liver disease or vanishing bile duct syndrome has not been reported. (7)

Potential drug interactions, pregnancy, and breastfeeding dangers may exist but are unknown. You should not use skullcap if you are pregnant or on any prescription medications. If you have depression or another psychiatric condition, you should consult your doctor before using because it may interfere with your treatment.

Sleep and stress aside, skullcap may be good for you in other ways.

The flavonoids in both the American herb (Scutellaria lateriflora) and Chinese skullcap (Scutellaria baicallensis) have been found to exhibit significant antioxidant activity and DNA protecting effects when tested in the lab using cultured cells. (8) (9)

How much to take and when? 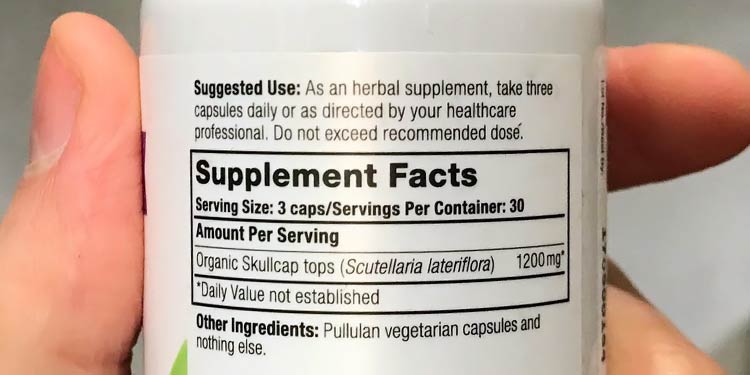 As a dietary supplement for sleep and mood support, many skullcap supplements recommend taking it 2-3 times daily. Oregon’s Wild Harvest organic skullcap advises 3 capsules, equal to 1,200 mg. The instructions do not say whether to take all capsules at once or in divided doses.

Nature’s Way instructs 2 capsules daily, totaling 850 mg. They do not specify if both should be taken at once.

If using this herb as a natural sleep aid, taking it 45-60 minutes before bed may be the best time. This is based on the 2003 clinical trial which reported that the reduction in anxiety occur ed 60 minutes after the capsule was swallowed. Dosages of teas, tinctures, and leaf powder may work faster, as there won’t be a capsule that needs to dissolve.

As mentioned, the NIH’s LiverTox database reports the rare cases of liver toxicity were associated with bogus supplements. Or in the more diplomatic words like they use, analysis of the supplements revealed their herbal ingredients were different than labeled.

That’s why you should buy this herb from larger, well-known brands. Of course that doesn’t guarantee safety, but the larger companies are more likely to have stricter quality control measures.

Not all the big brands sell it. In fact, very few do. Solaray is one of the biggest which sells Scutellaria lateriflora (American skullcap). That type has the best research for being a relaxant. Here’s the link for it on Amazon.

If you want the Chinese type, order Swanson which is a reputable brand.