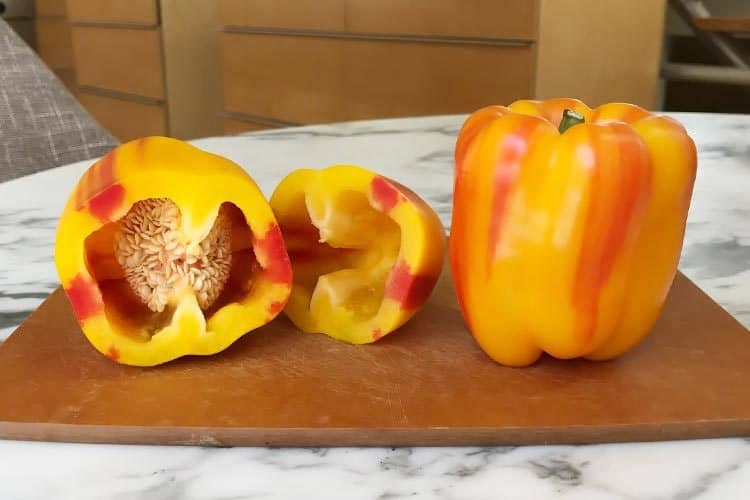 For us millennials, we have always known sweet bell peppers to come in green, red, yellow, and orange.

For older generations, only 3 out of those 4 colors existed.

Orange bell peppers didn’t come about ’til the 1980’s. The spontaneously created strain was spotted in a Dutch greenhouse and the rest is history.

Is history repeating itself with the striped bell pepper?

Is it another natural mutation… or a genetic engineered frankenfruit?

What are Enjoya and Aloha peppers?

Aloha and Enjoya are two marketing names used for red and yellow striped Holland bell peppers. Mastronardi Produce, better known as Sunset, sells them under the brand Aloha. Enjoya peppers are a brand name owned by 4 Evergreen, a bell pepper producer based in the Netherlands. Their US subsidiary, 4Earth, uses the name Enjoya to sell them, as do independent distributors like Melissa’s. Enjoya branding is also used in the United Kingdom, Germany, and France. 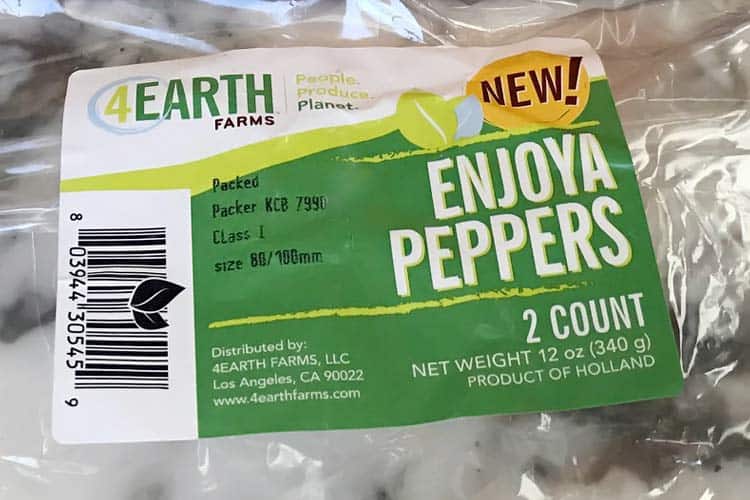 Some grocery stores call them flame peppers, which is a non-trademarked name.

Whatever you want to call them, they all come from the same place. 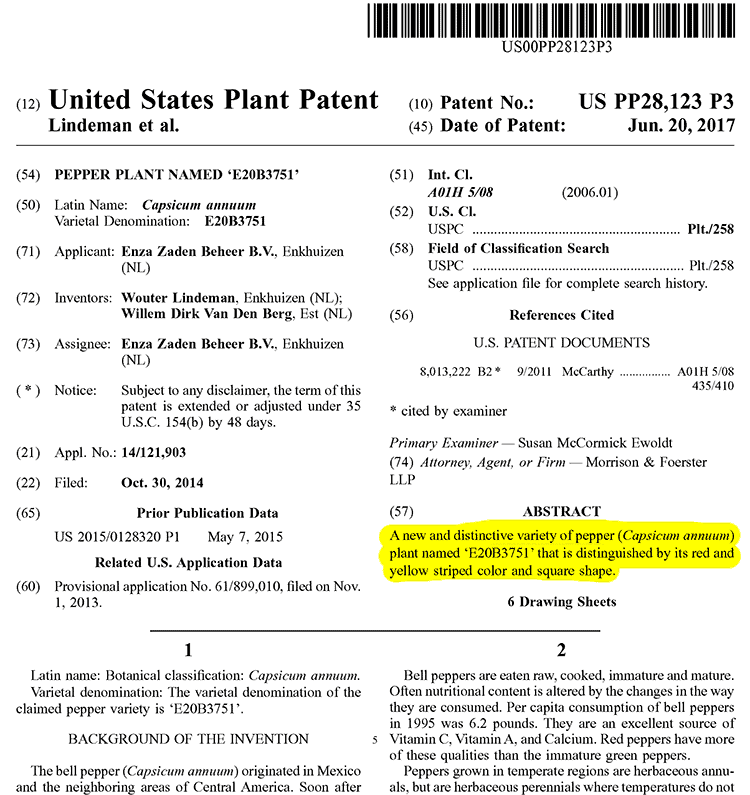 In the patent application, E20B3751 is the name given to this new variety. This is where they say it came Enjoya came from:

‘E20B3751’ was discovered as a spontaneous mutant in a screening trial of mutants of pepper variety ‘Maduro’ (not patented) conducted at Est, Netherlands. The mutant ‘E20B3751’ was selected based on its vertical red and yellow stripes color and propagated vegetatively (i.e., asexually).

In plain English, it’s a natural mutant strain that was selected from many. Enjoya, Aloha, and flame peppers are non-GMO.

Even though this zebra-like fruit wasn’t created using DNA splicing and dicing, it doesn’t reproduce in a natural way, like it would growing in a garden.

Nor did the creation of it come about in a completely accidental or unexpected way, as the marketing language on Enjoya’s website seems to infer (1):

“In 2013, Wilfred van den Berg found this beautiful variety in his greenhouse in Est. Together with Enza Zaden, Vijverberg BV and 4Evergreen, in recent years we have researched the optimal way to cultivate this gorgeous pepper.”

When you read that, it sounds like a Dutch guy in the tiny town of Est just randomly found it growing in his greenhouse one day.

Technically he did, but there’s way more to the story.

The patent specifically says that the E20B3751 strain was created using “a screening trial of mutants of pepper variety ‘Maduro’ (not patented).”

After that, the patent goes through the many different breeding methods one can use to naturally and unnaturally tinker with a given plant. This includes GMO techniques:

“Exemplary nucleic acids which may be introduced to the pepper lines of this invention include, for example, DNA sequences or genes from another species…”

That’s the definition of a GMO.

They also talk about “genes that confer resistance to an herbicide” such as glyphosate.

However, all that is boilerplate. It appears they included these GMO methods in the application just to ensure someone else wouldn’t circumvent their patent, by making striped bell peppers through genetic engineering.

All the application tells us is that they used mutagenesis screening. That’s basically growing and cross-pollinating various strains of a plant until you get the characteristics you want. It is a non-GMO breeding method.

Now going back to the guy who “found” it, we’re not talking about some grandpa just finding it one day in his backyard greenhouse.

If you look at the LinkedIn profile for Wilfred van den Berg, he’s a professional who has an extensive education in agriculture and it appears his entire career is in plant cultivation.

In short, Enjoya is the result of intentional cultivation, by a highly-skilled professional.

It seems like a simple enough idea for any half-way decent gardener. Buy Enjoya or Aloha peppers at the grocery store. Save the seeds and grow them in your garden!

Sorry, it’s not that simple.

If you look on the gardening forums and blogs, you will actually see that many novice – yet skilled – home gardeners have tried that to no avail.

As posted on the UK website Growing Food Saving Seeds, this is what the peppers looked like that user ‘pamj’ grew from Enjoya seeds: 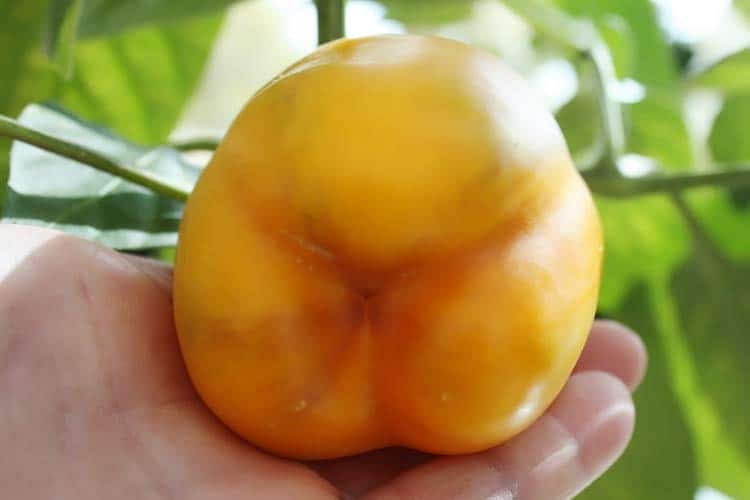 No yellow or red stripes. Perhaps you may say there are some unusual dark spots on the skin but aside from that, they look like normal sweet bell peppers.

The reason you can’t grow striped bell pepper seeds yourself is because the trait which creates the zebra-like appearance is not passed on during normal plant reproduction. Similar to the modern day banana, Aloha and Enjoya peppers are reproduced using cuttings. That ensures that the plants which grow them are all genetically identical.

Banana extinction fears have been raised by many. Because they are all grown using cuttings, the lack of genetic diversity makes them more susceptible to disease and parasites.

The difference is that the Cavendish banana represents some 99% of commercial supply. Enjoya accounts for far less than 1% of the world’s pepper supply. Even if it got wiped out, it wouldn’t materially affect the supply of this fruit.

The method of making banana cuttings is simple and widely known.

In contrast, no one in the public seems to know exactly how these pepper cuttings are accomplished. The explanation on 4Evergreen’s website is quite vague: (2)

“Enjoya is a unique bi-coloured sweet pepper with a sweet and crunchy bite. Enjoya was discovered by the growers of Nature’s Alliance, a member of the growers’ association Harvest House, who developed the optimum growth method for this special product together with their partner Enza Zaden. The peppers are grafted by hand, ripened slowly, and picked at just the right time.”

That vagueness echoes what the patent says:

“The distinctive characteristics of pepper plant variety ‘E20B3751’ have been found to be stable and are transmitted to new pepper plants when asexually propagated.”

The term “asexually propagated” doesn’t tell you much.

How they do it appears to be a trade secret. Otherwise, one would expect them to disclose more detail.

You can grow striped Holland bell pepper seeds at home, but don’t expect them to grow with stripes. They’re going to look like normal peppers.

Aloha and Enjoya peppers taste similar to normal red and orange bell peppers. The stripes don’t alter the flavor. They’re not as sweet as yellow peppers, nor are they as delicate. Enjoya are denser and weigh significantly more. 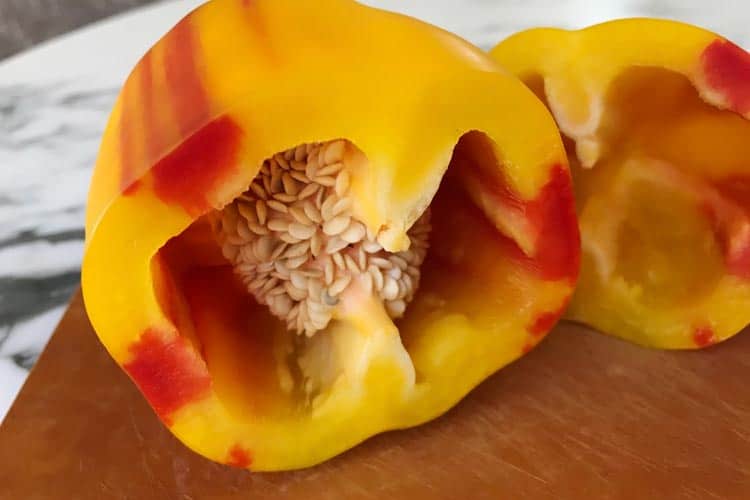 An Enjoya weighs ¾ of a pound on average, according to Melissa’s Produce. That’s 70% heavier than what a large yellow pepper weighs, which averages 6.6 oz according to the USDA National Nutrient Database. (3)

If you’re buying them by the pound, this can lead to price shock at checkout. The good news is that we have only seen them sold by quantity, not weight. You know upfront exactly what you’re paying per fruit.

Because they don’t taste much different than regular sweet bell peppers, their biggest advantage is the unique visual presentation. The best way to eat them is fresh, cut in pieces large enough to preserve the striped pattern. 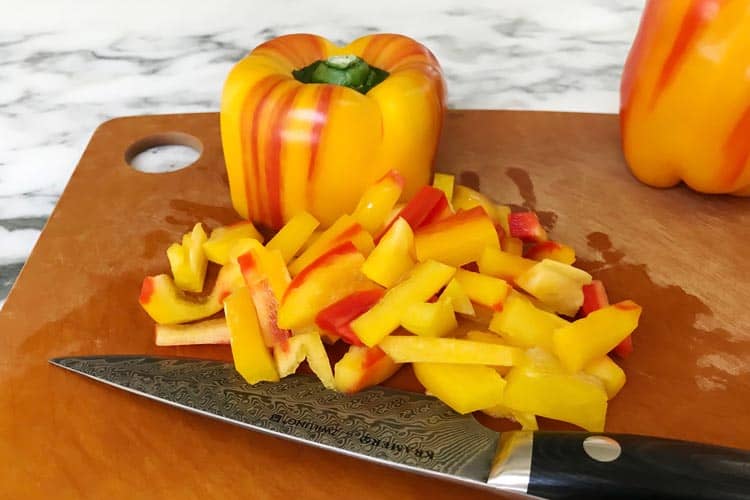 The smaller you cut them, the less stunning they become.

If you are going to cook them, Enjoya work well for stuffed bell peppers since you preserve the pattern of their skin. The fact that it’s thicker holds up better in the oven, too.

When eating them raw in salads and sandwiches, don’t slice them in same direction that the stripes run. Cut in the opposite direction of the stripes, so you still see the alternating red and yellow.

When you compare the nutritional values to red vs. green bell peppers and other colors, the overall healthiest is still probably orange. They have more vitamin C, lutein, and zeaxanthin.

However, detailed scientific analysis on the striped have yet to be published. So we can’t conclusively say how much antioxidant activity there is, or the levels for non-essential phytonutrients which aren’t listed on the label.

Striped bell peppers are only grown in Holland. This is not that unusual.

If you look at the PLU stickers on normal yellow and orange peppers, you will see that many are imported from Holland. Since the 1980’s, Dutch farmers have become famous for supplying the US market with their technicolor and hybrid pepper varieties.

Being that the peppers Enjoya and Aloha are patented and can only be reproduced using a proprietary grafting technique, it’s understandable why the patent holder – the Dutch company 4Evergreen – wants to maintain control of how they are grown. Licensing the method to farmers in the US, Canada, and Europe could lead to quality control issues and loss of a trade secret.

Most of these chains source from multiple suppliers, so in one location they may sell Enjoya, while another carries Aloha. Branding aside, both are the same thing.

How much striped peppers cost is comparable to the yellow and orange. In some ways they’re cheaper, because Enjoya weigh more on average. 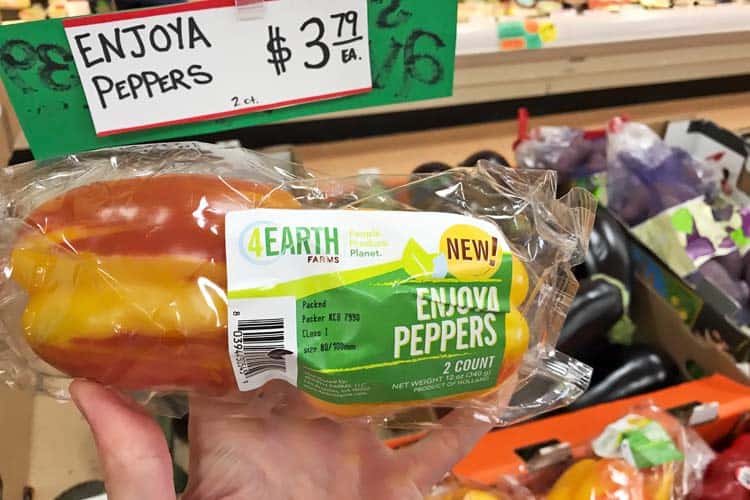 We paid $3.79 for a 2-pack of Enjoya peppers at Trader Joe’s in Manhattan Beach, California. Given how thick and juicy they are, it was like the equivalent of getting 3 sweet yellow bell peppers. Good value.

While they are non-GMO, it doesn’t appear 4Life is supplying organic striped peppers to any stores. Organic Enjoya or Aloha have never been spotted by us, nor any other commentators/reviews we’ve seen online.