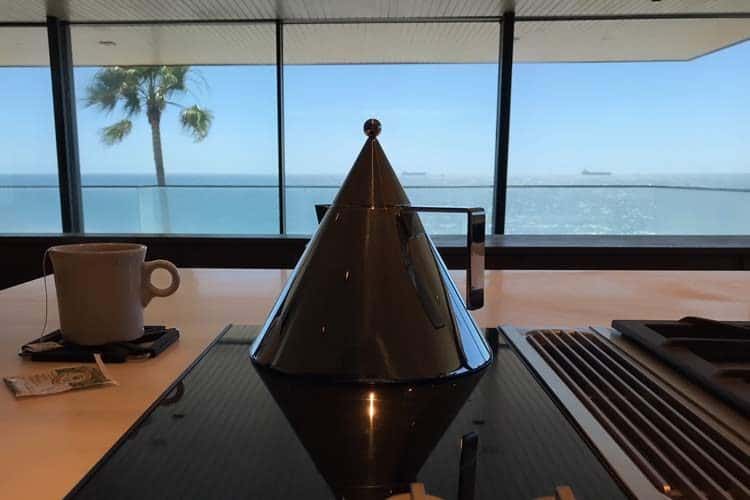 In our review of the Japanese Sori Yanagi stainless steel kettle, we totally trashed this iconic Alessi model.

Though pretty, the design seemed impractical for daily use. The handle looked like it would overheat, along with a couple other concerns.

Nevertheless, a reader challenged us to reconsider.

Here’s our honest review of the Alessi Kettle Il Conico, model number 90017. A classic for three decades and counting.

Born in 1931, Aldo Rossi was a famous architect and designer who became particularly influential during the latter part of his career, in the 70’s and 80’s.

In addition to buildings, he was hired to design products for Pirelli, Alessi, and other Italian companies. 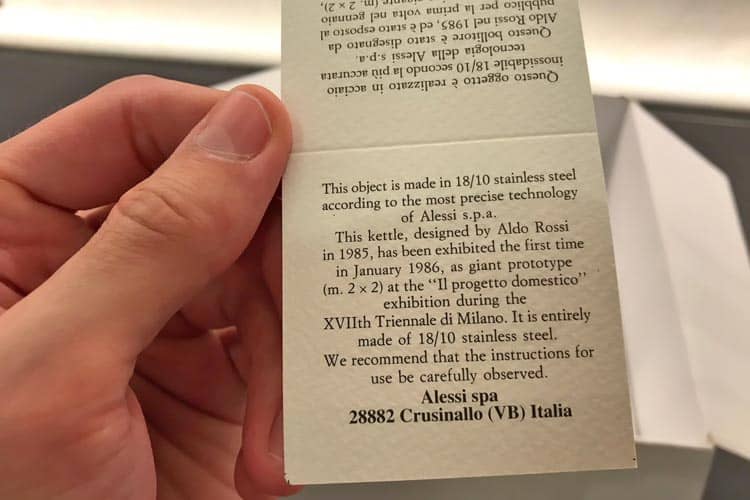 In Italian, “il” means the and “conica” means conical. In 1984 he created the Il Conica coffeemaker for Alessi, a housewares and kitchen utensil company. The Il Conico kettle followed a year later, in 1985.

The fact that the Aldo Rossi tea kettle is made of 100% stainless steel is a major health benefit.

Because you don’t want aluminum or copper. The former is a confirmed neurotoxin and the latter is that and highly reactive in the human body… it’s a pro-oxidant, particularly in the brain. (1)

This quote from a 2017 scientific journal pretty much sums up the danger: (2)

While natural glass is made of merely heated sand, unfortunately it can only withstand low to medium cooking temperatures. The direct heat of a burner will cause it to shatter.

Cast iron is fine, however it will impart a flavor on the water you don’t want.

The safest material to make a tea pot out of is 304 stainless steel.

Also called 18-8 or 18-10 grade, it’s combination of iron, nickel, and chromium. When combined, these elements create a highly-stabilized (non-oxidative) surface that won’t leech or breakdown into your boiling water.

Not all are, but this Alessi tea kettle is made out of 100% stainless steel. There are no plastic parts whatsoever. It’s made in Italy.

The box and packaging are all in Italian. There are English translations for some of the text, though not all. 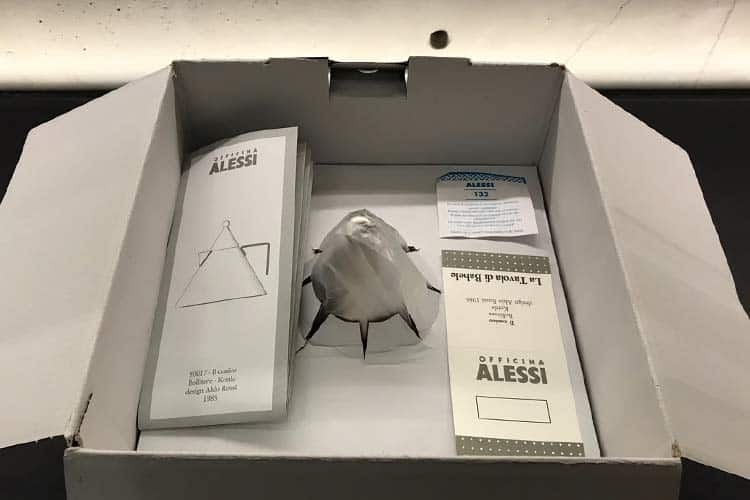 Inside you will find the kettle, carefully wrapped in a translucent plastic sheet. It’s held securely in place using cardboard that prevents movement. We bought it online and the box was packed in another for shipping. 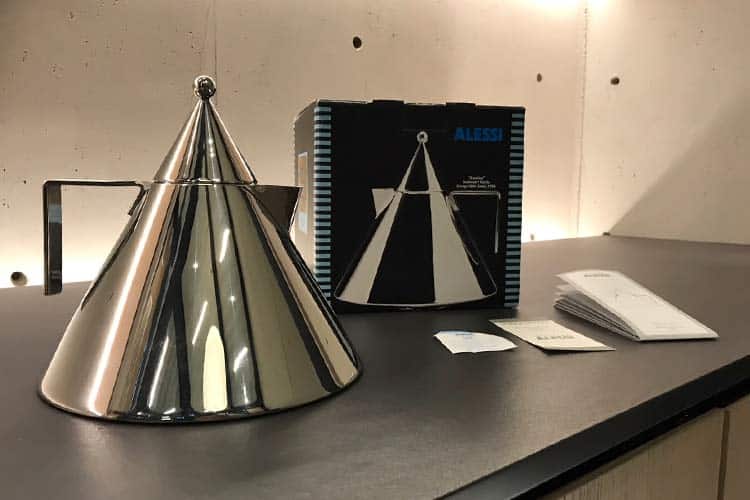 It’s 22 cm wide and 22 cm tall. For us Americans, that’s 8.66 inches in each direction. It will fit perfectly on your large electric or gas burner.

It holds a lot of water, though heats up fast. Even when full.

In the main kitchen we have both electrical and gas cooktops. We don’t use induction because of the EMF it creates, particularly around your reproductive organs, which are just inches away as you stand in front!

Therefore, we personally can’t tell you how fast it heats up on an induction surface. 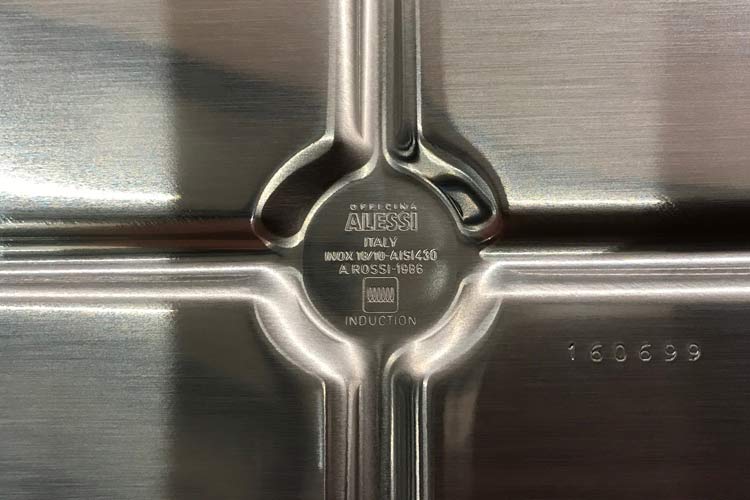 Reviews of the Il Conico tea kettle report that it works great on induction cooktops. The bottom of the kettle even says “induction” and has the graphic which signifies it can be used on that type of cooking element.

Which makes total sense, because all steel will work on induction. It’s magnetic, thanks to the iron. 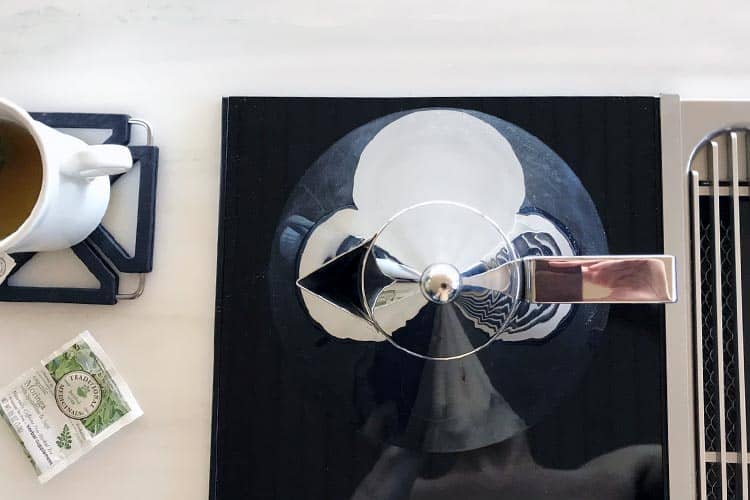 This is because the base is as wide as possible, which maximize the heated surface.

The cone shape minimizes the amount of heat at the top, because it the greatest volume is at the bottom… which is where the water is.

Aesthetics aside, Aldo Rossi made a tea pot that can heat water faster than almost any other design.

The handle, however, is a disadvantage. 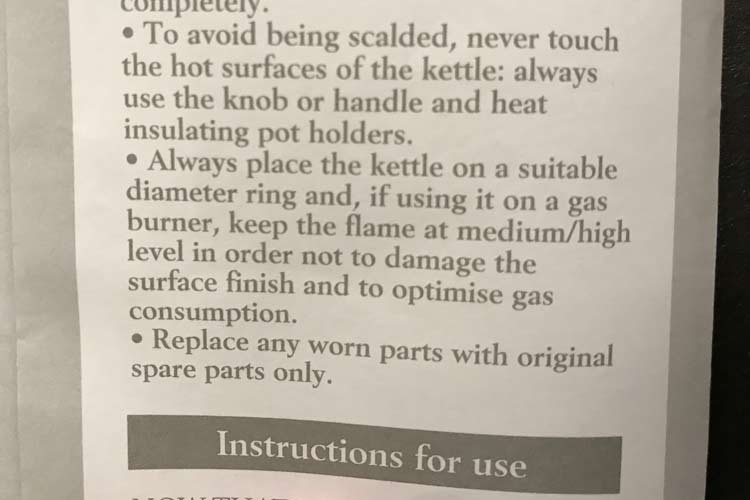 Yes, you will need an oven mitt or glove to hold the handle.

If there’s just a little water inside you’re boiling, it may not become scorching hot. If it’s fairly full, it’s definitely going to be too hot to handle.

Either way, you don’t want to be in the habit of using your hand as a guinea pig. Always using a mitt is the only way to safely hold it.

The lid stays in place on its own, without a silicone ring. You can tell its very precision made, as it leaves just enough tension to keep closed while slightly tipping, yet not so tight where it’s a struggle to take off.

The non-insulated handle is really the only Achilles heel of the Also Rossi tea kettle.

Some would argue the fact that it doesn’t whistle is another ding to its rating.

While many people associate loud noises with causing hearing loss, that’s only half the story.

The problem with whistling kettles is they create a high-pitched sound which is not good for you. This is why the Alessi tea kettle with bird whistle, as well as the Richard Sapper, are models we’re not interested in using.

Plus this one boils water so fast, are you really that forgetful where you need a reminder just a couple minutes later? Probably not.

Unlike that Copco, KitchenAid, or Chantal which you may want to hide when guests come over, the Alessi Aldo Rossi kettle is one you will want to proudly display.

It’s not just a kitchen accessory. It’s a work of art that’s been in style for decades. It may not technically be mid-century, though it already has the status of something that was designed that long ago.

One drawback is that because Il Conico kettle is so contemporary looking, it won’t work in all homes.

If you live in an American Colonial or English Tudor, it’s going to seem out of place. Though you don’t need a mid-century or today’s modern to make it work.

Because it’s uniform in material and has a simple shape, it works with many styles. 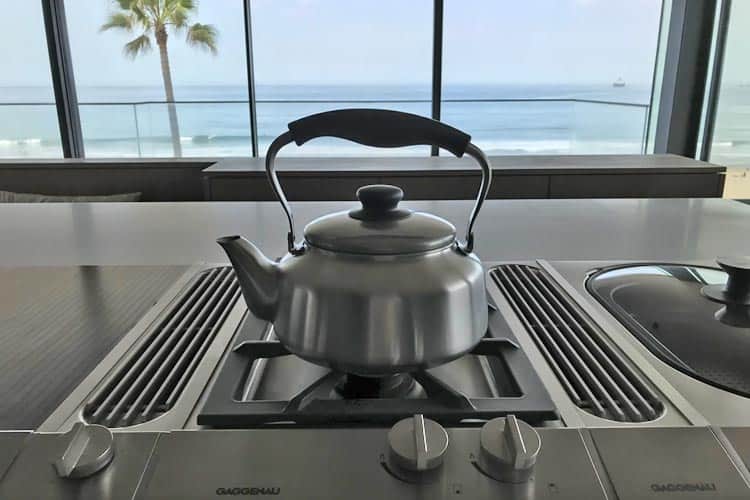 Even though it definitely worked in the main kitchen, we’re sticking with the Sori Yanagi up there. It’s used daily and you don’t need oven mitts for it.

The basement kitchen is another story… 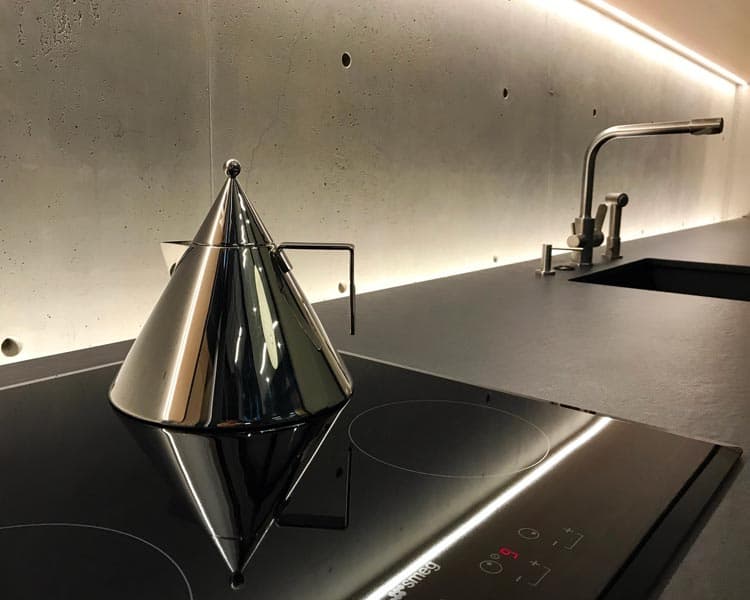 This one isn’t being used to boil water every day. Only when guests are sleeping down there, or for making tea on movie night.

Does the Aldo Rossi Il Conico come in a matte finish?

Nope. The 90017 only comes with one finish; shiny polished stainless steel. If you look up the foreign names for it – bollitore, wasserkessel, promocja, etc. – you will see they’re all identical to the one pictured above. Alessi sells the same size and style worldwide.

Even though all of the plumbing fixtures throughout this house are brushed nickel, the polished shininess of the teapot totally works. This is because unlike chrome, polished stainless does a better job at truly reflecting whatever hits it.

In short, it reflects back whatever is in your room. You don’t see the stainless, you see the color palette of your counter, walls, and cupboards. And no, it doesn’t show fingerprints like chrome is notorious for doing.

Despite its non-insulated handle, Il Conico is the best Alessi tea kettle. It’s made of high-grade stainless steel, doesn’t have an annoying whistle that may cause hearing damage, and of course it looks stunning. A tea kettle you will want to keep out.

Just make sure you use a potholder.

Another disadvantage is the price. This is not some $30 made in China tea pot from Target. It’s a $300 investment for something that will last your lifetime. Or at least, that’s the price in USD which Alessi lists on their website.

Fortunately, many online retailers offer it for less. Speaking of which, we don’t even know where you can physically buy it in-store, in the US or Canada. Here in Los Angeles, we haven’t seen it stocked at the fancy culinary stores.

Obviously prices change all the time, so we can’t say if the Amazon or Ebay price at this very moment is as good as it was when we wrote this review. You can check the current price on Amazon here to see what they’re selling it for.