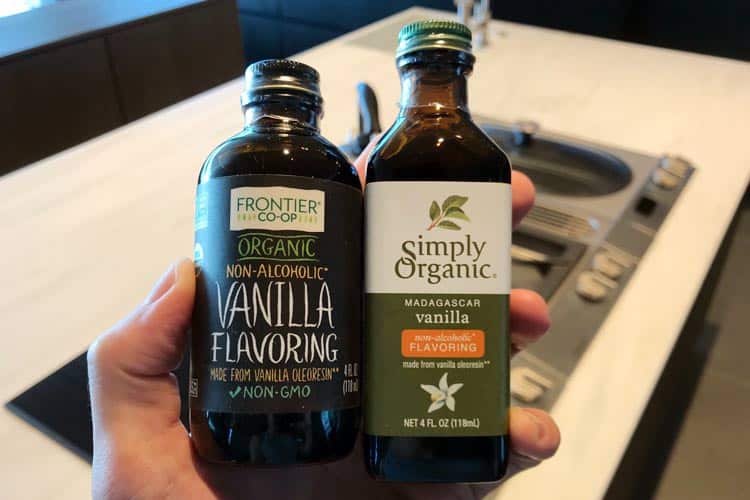 First off, we totally respect a person’s right to drink.

However, we find it ironic when someone focuses on their vodka or beer being organic, while sweeping under the rug the proven health risks of alcohol.

The WHO gives it a Group 1 carcinogen rating, the worst possible. It’s been proven to be a major risk factor for cancers of (1): 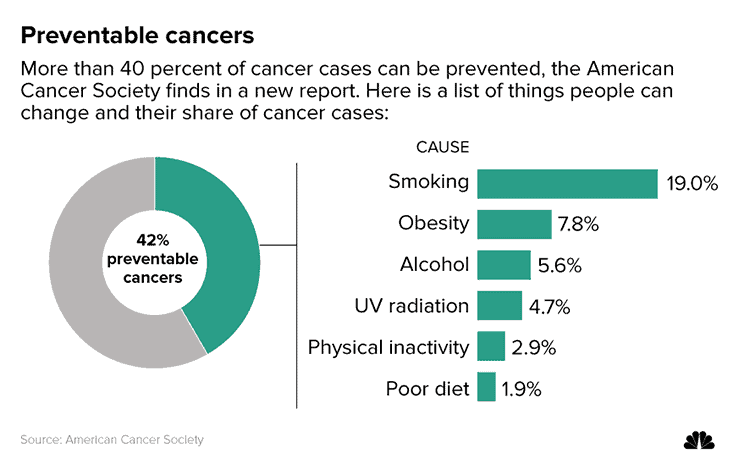 Among preventable causes, alcohol is the 3rd leading cause of cancer! (2)

Of course, a teaspoon of vanilla extract won’t get anyone drunk or even tipsy. Yet, no matter how minuscule the amount, know that alcohol is a mutagen – meaning it mutates your DNA.

All cancers ultimately originate from a DNA mutation. Not to mention, many signs of aging.

Since you’re not getting a buzz from a standard serving size of vanilla extract, the alcohol content serves you no benefit – neither for pleasure or health.

Given that, you might as well forgo it altogether when using this yummy flavoring.

Plus if you have kids, there’s another hazard to consider.

Extract of vanilla beans is the same proof as rum or vodka. By law, the extract must be 35% alcohol, though many are 40% (80 proof). Either way, a tiny 4 oz bottle is like taking 3 shots of straight vodka.

There have been news reports of kids abusing this and coming to school drunk, such as with Trader Joe’s bourbon vanilla. (3)

If that’s a concern for you as a parent, it’s yet another reason to teetotal when it comes to this flavoring.

Is there alcohol free vanilla extract?

Technically there’s no such thing as alcohol-free vanilla extract, as it legally can’t be made without alcohol. The U.S. Code of Federal Regulations Title 21, Part 169, Sec. 175 dictates that “In vanilla extract the content of ethyl alcohol is not less than 35 percent by volume.” In other words, alcohol-free versions can’t be called extracts.

Normally they are made with Grain Neutral Spirits (GNS) such as vodka, gin, rum, or whiskey. (4)

Vanilla flavoring can contain natural or imitation vanilla. The artificial form is known as synthetic vanillin and has been around since 1874. It was in that year which German chemists Ferdinand Tiemann and Wilhelm Haarmann invented it, using coal tar.

Today, coal tar isn’t used to produce artificial vanilla flavoring. It’s made from lignan, which is a wood component. (5)

Organic and/or natural vanilla flavor is derived from vanilla bean (Vanilla planifolia). In addition to containing the molecule vanillin, which is identical to the synthetic form, it also contains hundreds of other compounds, many of which contribute to the taste. 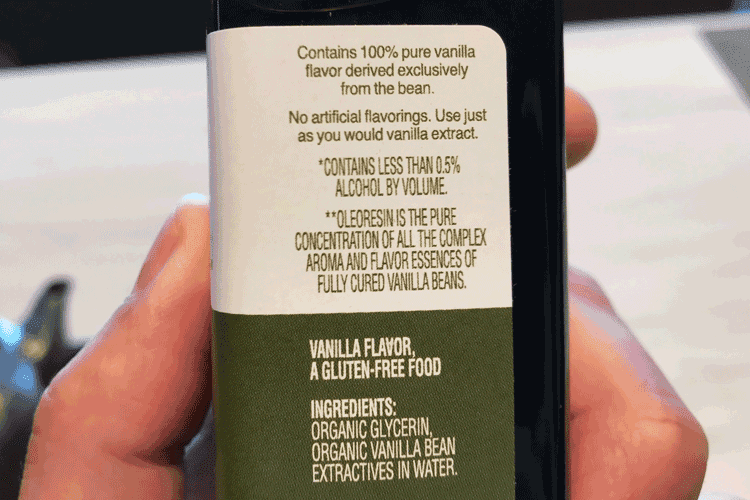 With an ORAC value of 122,400, dried vanilla bean has more antioxidants than even freeze-dried acai powder. Measurements have not been done on the liquid derivatives but one can bet they are still noteworthy.

What is glycerin in vanilla extract?

Glycerin, also known as vegetable glycerin, is a sugar alcohol similar to xylitol and erythritol. These are created naturally with the fermentation of certain plants. They don’t intoxicate you like ethanol, which is the type of alcohol found in drinks such as vodka, beer, and wine.

Instead of ethanol alcohol, glycerin is used as a natural solvent to extract the flavors of the vanilla bean. It’s how alcohol-free vanilla extracts and flavorings are made.

In the U.S. you will have to look for vanilla flavoring, since it cannot legally be called an extract given that it’s alcohol-free. To ensure it doesn’t use imitation or artificial vanillin, go with USDA organic. The best and most well-known brands are Simply Organic and Frontier Co-Op.

Trader Joe’s alcohol-free vanilla, as well as McCormick, are not organic. Trader Joe’s also adds sugar, probably to help mask the fact that the flavor tastes somewhat diluted. McCormick tastes authentic and robust but it’s a bad choice, because it uses both natural and artificial flavors.

Here at Superfoodly, we use a lot. Not just for baking muffins and pies, either. It’s used in our daily breakfast bowl of quinoa flakes, protein powder, and raw cacao.

We always buy either Frontier or Simply Organic.

How do we choose?

Why? Because they are the same company!

That’s right. Frontier Natural Products Co-Op was founded in 1976. They introduced the Simply Organic brand in 2001. They also own the Aura Cacia brand of essential oils. 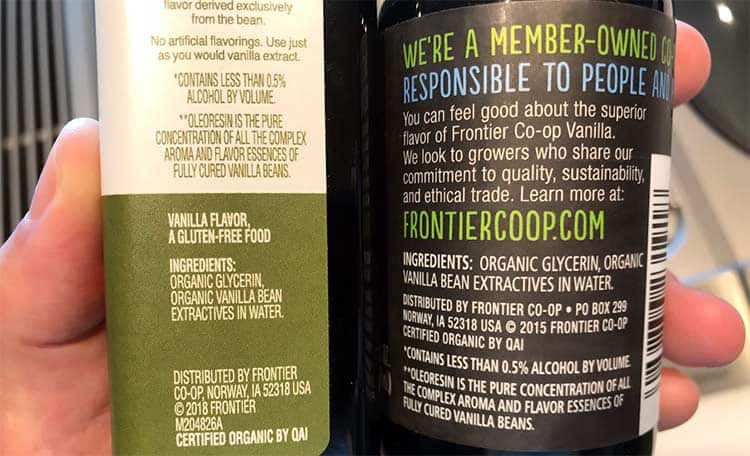 On the left is a Simply Organic bottle. Notice at the bottom of the label it says “Distributed by Frontier Co-Op.”

Although they don’t put it in writing, verbal inquiries have resulted in the answer that both brands use the same vanilla flavoring without alcohol. The difference is the bottles and labeling.

If you go to Whole Foods or Sprouts, typically you will see the Frontier Co-Op brand have a higher price point than Simply Organic. However, both make 2 and 4 oz bottles of the non-alcoholic flavoring. The larger 8 oz size is available only as an extract with alcohol.

But of course due to sales and price changes, sometimes Frontier is the cheaper choice.

On Amazon you can check the current price of Frontier here and Simply Organic here.